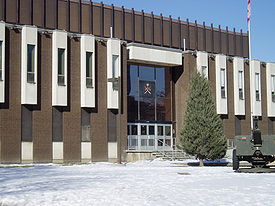 It is located close to the downtown core and financial district, where many members of the Primary Reserve work full-time. It is also close to many postsecondary institutions, such as the University of Toronto, Ryerson University, and George Brown College.

The Armoury is within short walking distance of the Queen subway station. It is also accessible by the 501 Queen and 502 Downtowner streetcar routes.

As a prominent military structure in downtown Toronto, it has been the site of a number of anti-war protests.[1]

The Armoury is currently home to: