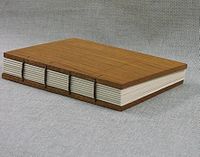 Coptic binding refers to methods of bookbinding developed by early Christians in Egypt, the Copts, and used from as early as the 2nd century AD to the 11th century.[1][2] The term is also used to describe modern bindings sewn in the same style.

Coptic bindings, the first true codices, are characterized by one or more sections of parchment, papyrus, or paper sewn through their folds, and (if more than one section) attached to each other with chain stitch linkings across the spine. In practice, the phrase "Coptic binding" usually refers to multi-section bindings, while single-section Coptic codices are often referred to as "Nag Hammadi bindings," after the 13 codices found in 1945 which exemplify the form.

Nag Hammadi bindings were constructed with a textblock of papyrus sheets, assembled into a single section and trimmed along the fore edge after folding to prevent the inner sheets from extending outward beyond the outer sheets. Because the inner sheets were narrower than the outer sheets after trimming, the width of text varied through the textblock, and it is likely that the papyrus was not written on until after it was bound; this, in turn, would have made it a necessity to calculate the number of sheets needed for a manuscript before it was written and bound.[3][4] Covers of Nag Hammadi bindings were limp leather, stiffened with waste sheets of papyrus. The textblocks were sewn with tackets, with leather stays along the inside fold as reinforcement. These tackets also secured the textblock to the covers; on some of the Nag Hammadi bindings, the tackets extended to the outside of the covering leather, while on others the tackets were attached to a strip of leather which served as a spine liner, and which was in turn pasted to the covers.[5] A flap, either triangular or rectangular, extended from the front cover of the book, and was wrapped around the fore edge of the book when closed. Attached to the flap was a long leather thong which was wrapped around the book two or three times, and which served as a clasp to keep the book securely shut.[6][7] 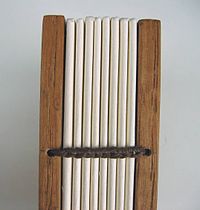 Artisans and crafters often use coptic binding when creating hand made art journals or other books.