Chryseis
Chryseis was also the name of two minor figures in Greek mythology: one of the Oceanids, daughters of Oceanus and Tethys, and one of the daughters of Thespius, who bore Heracles a son, Onesippus 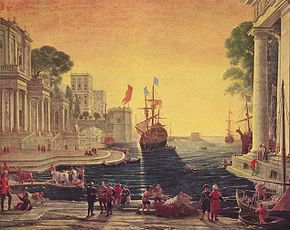 Odysseus returns Chryseis to her father (by Claude Lorrain, 1644).

In the first book of the Iliad, Agamemnon enslaves her, whom he admits is finer than his own wife, as a war prize and refuses to allow her father, a priest of Apollo, to ransom her. An oracle of Apollo then sends a plague sweeping through the Greek armies, and Agamemnon is forced to give Chryseis back in order to end it, so Agamemnon sends Odysseus to return Chryseis to her father. Agamemnon compensates himself for this loss by taking Briseis from Achilles, an act that offends Achilles, who refuses to take further part in the Trojan War. A later Greek legend, preserved in Hyginus' Fabulae, states that she had a son by Agamemnon. In medieval literature, Chryseis is developed into the character Cressida.