There are many varieties of ten-string guitar, including:

The oldest ten-string guitars are harp guitars, guitars to which extra strings have been added which are never fretted but may be plucked or strummed. These strings are therefore played in a manner somewhat similar to those of the harp, while those of the principal neck are played as a guitar, hence the name.[1]

Often but not always, a second neck, parallel to the fretboard, carries these extra strings. There have been many designs of harp guitar, but in the nineteenth century ten-string versions were particularly popular.

In the early 19th century Ferdinando Carulli and René Lacôte developed a harp guitar they called the Décacorde (French for ten-string).[2]

Carulli played this type of guitar and wrote a method for it titled Méthode Complète pour le Décacorde.[3] In it he describes the tuning as C-D-E-F-G-A-d-g-b-e' (strings 10 to 1), with the upper five strings A-d-g-b-e' fretted and the lower basses C-D-E-F-G not fretted.

Two Décacordes by Lacôte are housed in the Music Museum of the Cité de la Musique in Paris:

There is also a Décacorde (attributed to Lacôte), that was in the workshop of Françoise Sinier de Ridder, which has 7 strings on the neck (fretted) and 3 sub-basses (unfretted strings).[6]

Period harp guitars built by Johann Gottfried Scherzer survive. A copy of one of these, based on an original circa 1862, has six fretted and four unfretted strings.[7]

Johann Kaspar Mertz is known to have played ten-string harp guitars. Based on surviving instruments and urtexts of music written for it, the tuning was AI-BI-C-D-E-A-d-g-b-e'.

Many configurations have been produced, but the ten-string classical guitar received a particular boost [8] in 1964, when Narciso Yepes performed the Concierto de Aranjuez with the Berlin Philharmonic Orchestra, using a ten-string guitar invented by Yepes in collaboration with José Ramírez III, with a specific tuning designed to supply sympathetic string resonance to all twelve notes of the chromatic scale, in unison with any note played on the treble strings. This was significant for two reasons:

The use of the ten-string classical guitar is similar to that of the harp guitar:

Unlike the harp guitar, the extended-range classical guitar has a single neck and allows all strings to be fretted.

While the six-string classical guitar remains the standard and most common instrument, since 1963 ten-string guitars in similar configuration to the original Ramírez have been adopted by many classical guitarists and produced by several first-class luthiers, using both Yepes' original tuning and others.

In January, 2009, Gadotti Guitars announced the 10 String Nylon King Electric, a solid body, nylon-stringed ten-string guitar, suitable for both Yepes and other tunings such as the Baroque.[10]

A ten-string jazz guitar by Mike Shishkov, based on the ten-string extended-range classical guitar, was demonstrated at the 3rd International Ten String Guitar Festival in October, 2008.[11]

Hawaiian guitars are electric lap steel and table steel guitars with six, eight or ten strings per neck, and one or two necks. The ten-string single-neck instrument is one of the standard configurations, not one of the most common but not unusual either.

Most pedal steel guitars have either one or two ten-string necks. Some but by no means all advanced players use necks with more than ten strings, but ten strings is the normal minimum.

The standard student pedal steel guitar is a single-neck ten-string instrument with three pedals and from one to five knee levers, tuned to E9 tuning.[12]

Some advanced players prefer to remain on an S-10 configuration, perhaps adding more pedals and/or knee levers. Other advanced players progress from the S-10 to a single neck instrument with twelve strings, either a U-12 which uses a universal tuning, or an S-12 which uses an extended E-9 tuning. Single neck instruments with more than twelve strings also exist, such as the fifteen-string universal tuning U-15, and double-neck with more than ten strings per neck, notably the D-12 with two twelve-string necks and various tunings most commonly based on extended E9 and extended C6 tunings.

Professional instruments are normally custom-made to order. Even in the case of an S-10, while the first three pedals and five knee levers are fairly standard in function, there are variations to the order of these and many players add others. Advanced players of all configurations tend to design their own individual setups, known as copedents, specifying the exact string tunings and gauges and the actions of the pedals and levers.

The baroque guitar is one of the earliest instruments considered a guitar, and the first to have significant surviving repertoire.

The viola guitar is a guitar with ten light steel strings in five courses, played with the fingers rather than with a plectrum. It is particularly prevalent in the folk music of Brazil, whre it's called "viola caipira" (hillbilly guitar), or simply "viola". The viola braguesa and viola amarantina are other types of ten-string Portuguese folk guitars,[16] which are possibly predecessors of the Brazilian instrument.

B.C.Rich produce three models of solid body ten-string guitar, all of them strung and tuned in the same way.

This instrument was introduced as a custom order model with a new body shape known as the Rich Bich at the 1978 NAMM Show. There were two innovative features:

The design was successful enough to be still in production as a ten-string, but many players also bought it for the body shape rather than the ten-string feature, and simply removed the extra strings. B.C.Rich recognised this by releasing six-string models of the Bich body shape.

All Bich variants are hard tail guitars with through body necks and two humbucking pickups. The ten-string models differ from each other in finish and control details[18]

The most notable user of the "Rich Bich" 10 string guitar is Joe Perry of Aerosmith.

On Godin's site, it is stated that the guitar was specially designed for performing Turkish traditional music. 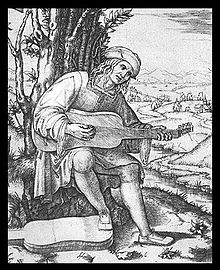 Close relatives of the guitar with ten strings include: