Goring-on-Thames (or Goring) is a large village and civil parish on the River Thames in South Oxfordshire, about 5.5 miles (8.9 km) south of Wallingford. 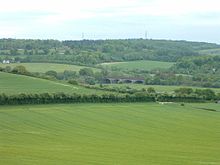 Goring is on the north bank of the River Thames, in the Goring Gap which separates the Berkshire Downs and the Chiltern Hills. The village is about 8 miles (13 km) northwest of Reading and 16 miles (26 km) south of Oxford. Immediately across the river is the Berkshire village of Streatley, and the two are often considered as twin villages, linked by Goring and Streatley Bridge and its adjacent lock and weir. The Thames Path, Icknield Way and the Ridgeway cross the Thames at Goring. The Great Western Main Line railway passes through Goring, and Goring & Streatley railway station in the village is served by local First Great Western trains running between Reading and Oxford.

The Church of England parish church of Saint Thomas of Canterbury is Norman, built early in the 12th century.[2] The bell-stage of St. Thomas's bell tower was added in the 15th century[2] and has a ring of eight bells.[3] The church hall was added in 1901.[4]

A priory of Augustinian nuns was built late in the 12th century with its own priory church adjoining St. Thomas's.[2] The priory survived until the early part of the 16th century[5] when it was suppressed in the Dissolution of the Monasteries and then demolished. The foundations of the priory church, cloister, dormitory, vestry, chapter house and parlour were excavated in 1892.[4]

Goring Free Church is a member of the Countess of Huntingdon's Connexion.[6] The congregation was founded in 1788 and its first chapel was built in 1793.[6] At its centenary in 1893 a new church building was added[4] and the original chapel became the church hall.[6]

Goring United Football Club plays in the Reading Football League.[8] Goring-on-Thames Cricket Club was founded in 1876.[9] Two of its teams play in the Berkshire Cricket League.[10] Goring has also a lawn tennis club with teams that play in two local leagues.[11]

Oxfordshire Village of the Year 2009

On 10 July 2009 Goring was named Oxfordshire's Village of the Year, ahead of 11 other villages and taking the title from neighbouring Woodcote.[14] The £1000 prize will be put towards the village's hydro-electric project[15] to generate electricity from the river Thames.

The competition looks at the depth of the infrastructure and activity within the village and Goring's plans to raise £1m to fund the hydro-electric project was instrumental to its success.

Goring-on-Thames was the Overall Regional Winner as well as winner in the Sustainability and Communications categories of the Calor Village of the Year regional heat for South England.[16]