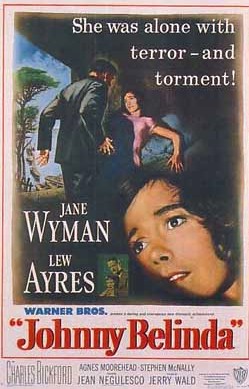 "Johnny Belinda" is a 1948 based on the play of the same name by . The movie was adapted to the screen by and , and directed by .

The story is based on a real life incident that happened near Harris's summer residence in Fortune Bridge, Bay Fortune, . The title character is based on the real life of Lydia Dingwell (1852-1931), of Dingwells Mills, . This film also expresses the consequences of spreading lies and rumors.

It was filmed in northern around Mendocino.

It is the story of a girl, Belinda McDonald, who is befriended by the new doctor, Dr. Robert Richardson, who comes to the area of on the east coast of , at the end of the nineteenth century. The doctor realizes that, although she cannot hear or speak, Belinda is very intelligent. She lives on a with her father, Black McDonald, and her aunt, Aggie McDonald, and rarely goes into town. The family sells farm goods to the nearby town, mainly . Her father and aunt resent Belinda because her mother died giving birth to her. Dr. Richardson teaches Belinda and what things are. Over time, his affection for her grows.

The doctor’s , Stella McCormick, tries to get the doctor to court her. But the doctor does not see Stella in that way at all. After she figures out that he is becoming attracted to Belinda, she starts to resent both the doctor and Belinda.

One of the family's customers, Locky McCormick, goes to the farm when Belinda is alone and s her. She becomes . When the people in town find out that she is pregnant, they suspect Dr. Richardson because he has spent a lot of time with her. As time goes by, the pressure of the rumors finally cause the doctor to look for a new practice. He decides to marry Belinda and take her and the baby with him. He goes on ahead to find both a new place to practice and a new home for them.

While he is away finding them a new home, McCormick, now married to the doctor's former secretary, Stella, decides that he wants the child that is his. He goes to visit the baby; when Black McDonald sees him, he orders McCormick to leave. McCormick confesses to Black that the baby is his and that he will come back to get the child. Black follows McCormick and threatens to expose him to the town. They fight and McCormick throws McDonald off the cliff into the sea.

Now Belinda and her aunt Aggie try to run the farm, but soon start struggling to pay the bills and keep the farm up. The town, at the urging of McCormick, has a meeting and declares Belinda "unfit" to care for the child. When McCormick and his wife come to take the baby, Belinda first makes Stella McCormick realize that she is smarter than the townspeople have given her credit for, and that she will not give up her baby without a fight. Stella confronts Locky, who confesses that the child is his. He then tries to retrieve the baby, but Belinda tries to block his path. He shoves her down and heads up the stairs. She then grabs a shotgun, and shoots and kills him. Belinda is arrested and goes on trial for murder. At the trial, Dr. Richardson testifies that McCormick raped Belinda, and that she was protecting her property and family. The court dismisses this as the doctor’s love for her, but then finally Stella, holding old deep romantic feelings for the doctor, corroborates the doctor's story, saying that her husband had confessed the truth to her on the day he was killed. Belinda is set free for protecting her baby and home.