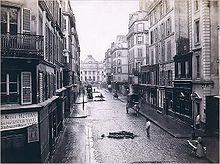 Charles Marville was the pseudonym of Charles François Bossu (1813 – c. 1879), a French photographer who mainly photographed architecture and landscapes. He used both paper and glass negatives. He is most well known for taking pictures of ancient Parisian quarters before they were destroyed and rebuilt under "Haussmannization", Baron Haussmann's new plan for modernization of Paris. He was originally trained to paint, engrave, and illustrate. He also traveled to Italy, Germany, and Algeria. By the late 1850s Paris, France asked Charles Marville to document the ancient sections of the city before they would be modified by modernization. In 1862, he was named official photographer of Paris.

The first exhibition in the United States and the very first scholarly catalogue on the renowned 19th-century French photographer Charles Marville will present recently discovered, groundbreaking scholarship informing his art, including his identity, background, and family life. On view at the National Gallery of Art, Washington, from October 1, 2012 through January 6, 2013, Charles Marville, 1813–1879 will include some 100 photographs that represent the artist's entire career, from his city scenes and landscape and architectural studies of Europe in the early 1850s to his compelling photographs of Paris and its environs in the late 1870s. The exhibition is organized by the National Gallery of Art, Washington.

"Although his photographs of Paris on the brink of modernity are widely hailed as among the most accomplished ever made of that city, Marville himself has long remained an enigma to art historians," said Earl A. Powell III, director, National Gallery of Art. "We are thrilled to present this new research about Marville and are deeply grateful to lenders, both public and private, for making this landmark show possible."

Recent Discoveries Marville has remained a mystery for so long partly because documents that would shed light on his biography were thought to have disappeared in a fire that consumed Paris' city hall in 1870. The whereabouts of others were simply unknown. However, new research has uncovered a wealth of documents that have been critical in reconstructing Marville's personal and professional biography.

Exhibition curator Sarah Kennel and independent researcher Daniel Catan have made astounding discoveries in Parisian archives that have provided the basis for a completely new history of Marville. The most important revelation is his given name: Charles-François Bossu. Born into an established Parisian family in 1813 (and not 1816, as previously thought), the young Bossu adopted the pseudonym Marville just as he was embarking on a career as an illustrator and painter in the early 1830s. Although he continued to be known as Marville until his death in Paris on June 1, 1879, (two facts also just uncovered), he never formally changed his name and therefore many of the legal documents pertaining to his life have gone unnoticed for decades.

Kennel and Catan have not only established Marville's biography, including his parentage and his relationship with a lifelong companion (named in his will), but also uncovered many significant details that illuminate the evolution and circumstances of his career.

The Exhibition and Artist's Background Charles Marville—whose career, before this exhibition, had not been examined in detail—was widely patronized and acclaimed during his lifetime and continues to be recognized as one of the most accomplished and prolific photographers in the history of the medium.

Charles Marville, 1813–1879 is divided into six sections, beginning with a compelling series of intimate self-portraits and portraits of family, friends, and colleagues, many made in his studio on the rue St. Dominique in the early 1850s. It was then that Marville abandoned his 17-year tenure as an illustrator of journals and books in order to take up photography. These portraits, many of which have not been identified until now, provide a fascinating window into Marville's personal life and professional ties, and serve as an introduction to the exhibition.

Starting in 1850, Marville traveled throughout France, Italy, and Germany, using the paper negative process with great skill to create beautiful landscapes and striking architectural photographs. Many of these works were included in albums produced by the pioneering publisher Louis-Desiré Blanquart-Evrard. The quantity and quality of the photographs used by the publisher serve as both a testament to Marville's skill and as an indication that his training as an illustrator prepared him exceptionally well for this new pictorial enterprise of artistic documentation.

Marville was a savvy practitioner whose range of skills was greatly transformed by the adoption of the collodion negative process in the mid 1850s. Around 1855, Marville undertook a series of delicate cloud studies, made from the rooftop of his Parisian studio using the new process. More rapid and sensitive than the paper negative process, the collodion negative enabled the photographer to capture delicate, luminous cloud formations on the city's horizon—an achievement that was noted by several critics at the 1862 Universal Exhibition in London.

At the same time that he was exploring new photographic technologies, Marville expanded his practice by honing in on two lucrative areas: reproductions of artworks and architectural photographs. He excelled at both and assumed the title and related privileges of photographer to the Louvre while he also documented building and renovation projects in Paris and the provinces for prominent French architects, including Eugène Viollet-le-Duc and Felix Duban.

In 1858, Marville was commissioned by the city of Paris to photograph the newly refurbished Bois de Boulogne, a royal park on the edge of Paris that had been transformed under the emperor Napoleon III into a site of bourgeois leisure and pleasure. Arguably his first important body of work that was conceived of and executed as a systematic series, the Bois de Boulogne series would influence his best-known work, the Old Paris photographs.

Commissioned by Paris' agency on historic works (under the aegis of urban planner Georges-Eugène Baron Haussmann), Marville made approximately 425 photographs in the mid-1860s of the narrow streets and crumbling buildings of the premodern city at the very moment they were threatened by demolition. Known as the Old Paris series, the photographs are captivating for their formality and their historical poignancy. In many cases they serve as the only visual record of sites that have long since vanished.

The final section of the exhibition offers an overview of the emergence of modern Paris through Marville's photographs. Even before completing the Old Paris series, Marville was commissioned by the city to record the Paris that was coming into being, from massive construction projects, renovated churches, and broad boulevards to a host of modern conveniences, such as the elegant new gas lamps and the poetically named vespasiennes (public urinals) that cemented Paris' reputation in the 1860s as the most modern city in the world. Sharp-edged, beautifully detailed, and brilliantly composed, Marville's photographs of the new city do not simply document change but—in their very form—shape the visual rhetoric of modern Paris. (From Artdaily.org)