Beatrix (Beatrix Wilhelmina Armgard; born 31 January 1938) is the Queen regnant of the Kingdom of the Netherlands comprising the Netherlands, Curaçao, Sint Maarten, and Aruba. She is the first daughter of Queen Juliana of the Netherlands and Prince Bernhard of Lippe-Biesterfeld. She studied law at Leiden University. In 1966, she married Claus von Amsberg, with whom she had three children: Prince Willem-Alexander (born 1967), Prince Friso (born 1968), and Prince Constantijn (born 1969). When her mother Juliana abdicated on 30 April 1980, Beatrix succeeded her as Queen of the Netherlands. On 6 October 2002 Prince Claus of the Netherlands died. 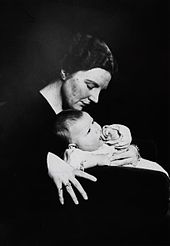 Beatrix as an infant with her mother Juliana in 1938

Princess Beatrix was born Princess Beatrix Wilhelmina Armgard of the Netherlands, Princess of Orange-Nassau, Princess of Lippe-Biesterfeld on 31 January 1938 at the Soestdijk Palace in Baarn, Netherlands. She was the eldest daughter of Crown Princess Juliana of the Netherlands and Prince Bernhard of Lippe-Biesterfeld.[1] Beatrix's five godparents are King Leopold III of the Belgians, Princess Alice, Countess of Athlone, Princess Elisabeth of Waldeck and Pyrmont, Duke Adolf Friedrich of Mecklenburg, and Countess Allene de Kotzebue.[2] When Beatrix was one year old, in 1939, her first sister Princess Irene was born.[1] 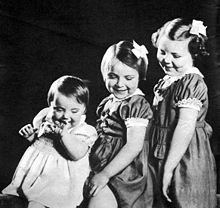 When World War II broke out in the Netherlands in May 1940, the Dutch Royal Family fled to London, United Kingdom. One month later, Beatrix went to Ottawa, Ontario, Canada with her mother Juliana and her sister Irene, while her father Bernhard and maternal grandmother Queen Wilhelmina remained in London.[1] The family lived at the Stornoway residence.[3] In thanks for the protection of her and her daughters, (then) Princess Juliana established the delivery of tulips to the Canadian government every spring, which are the centrepiece of the Canadian Tulip Festival. Her second sister Princess Margriet was born in 1943.[1] During their exile in Canada, Beatrix attended nursery and the primary school[4] Rockcliffe Park Public School.[5]

The family returned to the Netherlands on 2 August 1945. Beatrix went to the progressive primary school De Werkplaats in Bilthoven. Her third sister Princess Christina was born in 1947.[1] On 6 September 1948, her mother Juliana succeeded her grandmother Wilhelmina as Queen of the Netherlands, and Beatrix became the heiress presumptive to the throne of the Netherlands at the age of ten.[citation needed] 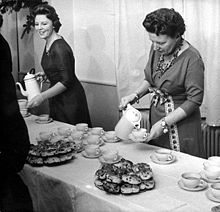 Princess Beatrix and Queen Juliana in 1960

In April 1950, Princess Beatrix entered the Incrementum, a part of Baarnsch Lyceum, where, in 1956, she passed her school-graduation examinations in the subjects of arts and classics.[6]

On 31 January 1956, Princess Beatrix celebrated her 18th birthday. From that date, under the Constitution of the Netherlands, she was entitled to assume the Royal Prerogative. At that time, her mother installed her in the Council of State.[citation needed]

The same year, at Leiden University her university studies began. In her first years at the university, she studied sociology, jurisprudence, economics, parliamentary history and constitutional law.[6] In the course of her studies she also attended lectures on the cultures of Suriname and the Netherlands Antilles, the Charter for the Kingdom of the Netherlands, international affairs, international law, history and European law.[citation needed]

The Princess also visited various European and international organisations in Geneva, Strasbourg, Paris, and Brussels. She was also an active member of the VVSL (Female Union for Students in Leiden), now called L.S.V.Minerva, after it had merged with the Leidsch Studenten Corps (which before then was male-only). In the summer of 1959, she passed her preliminary examination in law, and she obtained her law degree in July 1961.[6]

Her appearance on the political scene was almost immediately marked by controversy. In 1965, Princess Beatrix became engaged to the German aristocrat Claus von Amsberg, a diplomat working for the German Foreign Office. Their marriage caused a massive protest during the wedding day in Amsterdam on 10 March 1966. Prince Claus had served in the Hitler Youth and the Wehrmacht and was, therefore, associated by a part of the Dutch population with German Nazism. Protests included such memorable slogans as "Claus 'raus!" (Claus out!) and "Mijn fiets terug" (Give me back my bike), a reference to the memory of occupying German soldiers confiscating Dutch bicycles. A smoke bomb was thrown at the wedding carriage by a group of Provos causing a violent street battle with the police. As time went on, however, Prince Claus became one of the most popular members of the Dutch monarchy and his 2002 death was widely mourned.

An even more violent riot occurred on 30 April 1980, during the investiture (sovereigns of the Netherlands are not crowned as such) of Queen Beatrix. Some people, including socialist squatters, used the occasion to protest against poor housing conditions in the Netherlands and against the monarchy in general, using the also memorable slogan "Geen woning; geen Kroning" (No house; no coronation). Clashes with the police and security forces turned brutal and violent. The latter event is reflected in contemporary Dutch literature in the books of A.F.Th. van der Heijden.

Queen of the Netherlands

On 30 April 1980, Beatrix became Queen of the Netherlands when her mother abdicated. In domestic matters, she has little political say; however, in international relations, the Queen has much more latitude. In 1994, the minister of Foreign Affairs conveyed in Parliament that a Dutch embassy in Jordan had been opened at her request.

On 6 October 2002, the Queen's husband, Prince Claus died after a long illness. A year and a half later, her mother died after a long battle with senile dementia, while her father succumbed to cancer in December 2004.

Beatrix is rarely quoted directly in the press, since the government information service (Rijksvoorlichtingsdienst) makes it a condition of interviews that she may not be quoted. This policy was introduced shortly after her inauguration, reportedly to protect her from political complications that may arise from "off-the-cuff" remarks. It does not apply to her son Prince Willem-Alexander.

On 8 February 2005, Beatrix received a rare honorary doctorate from Leiden University, an honour the Queen does not usually accept. In her acceptance speech she reflected on the monarchy and her own 25 years as queen.[9] The speech was broadcast live.[10] 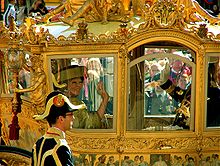 On 29 April and 30 April 2005, she celebrated the 25th anniversary of her reign. She was interviewed on Dutch television, was offered a concert on Dam Square in Amsterdam, and a celebration took place in The Hague, the country's seat of government.

On 30 April 2009 the Queen and the royal family were targeted in a car attack by a man called Karst Tates. Tates crashed his car into a parade in Apeldoorn, narrowly missing a bus carrying the Queen. Five people were killed instantly; and two victims and the assailant Tates died later. Other victims of the crash were in a critical life threatening situation. One week after the attack another victim had succumbed to sustained injuries. The royal party were unharmed, but the Queen and members of her family saw the crash at close range and were visibly shaken. Within hours, Queen Beatrix made a rare televised address to express her shock and condolences. The man apparently told police he was deliberately targeting the royal family.[11] It is thought to be the first physical attack on Dutch royalty in modern times.

The royal palaces are the property of the Dutch state and given for the use of the reigning monarch;[12] While the House of Orange-Nassau possesses a large number of personal belongings, items such as paintings, historical artifacts and jewellery are usually associated with the performance of royal duties and/or the decoration of royal residences. As such, these items have a cultural significance beyond that of simple artworks and jewellery, and have therefore been placed in the hands of trusts: the House of Orange-Nassau Archives Trust and the House of Orange-Nassau Historic Collections Trust. Part of the collection is on permanent loan to Het Loo Palace Museum in Apeldoorn and the Rijksmuseum in Amsterdam. Queen Juliana had sold the remaining royal palaces and had put the cultural assets (paintings, antiques, books, etc.) into non-personal trusts.

The Crown Jewels, comprising the crown, orb and sceptre, Sword of State, royal banner, and ermine mantle have been placed in the Crown Property Trust. The trust also holds the items used on ceremonial occasions, such as the carriages, table silver, and dinner services. Placing these goods in the hands of a trust ensures that they will remain at the disposal of the monarch in perpetuity.[13] The Royal Archives house the personal archives of the royal family.[14] This includes books, photographs, and artworks, as well as the books of the House of Orange-Nassau and the music library. The library was begun in 1813, following the return of the Orange-Nassaus to the Netherlands. King William I allowed the Stadtholder's library to remain part of the Royal Library in The Hague. The library houses a collection of some 70,000 books, journals and brochures. The music library has 6,000 scores, going back to the mid 18th century.

The Royal House Finances Act (1972)[15] as amended in 2008 sets allowances for the King (or Queen Regnant), the Heir to the Throne, and the former sovereign who has abdicated. Provision is also made for their spouses (and in the case of death, for the surviving spouse). The allowances have two components: income (A-component) and personnel and materials (B-component). Annual increases or decreases are provided for: the A component is linked to changes in the annual salary of the Vice-President of the Council of State; the B-component is linked to changes in civil service pay and the cost of living.

Costs relating to the security of members of the Royal House, State Visits, and the maintenance and upkeep of the Royal Palaces (which are considered to be national monuments) continue to be funded by the budgets of the appropriate Government Ministries and are not included in the budget for the Royal House.[17]

According to the State Budget for 2010, the budgetary allocation for the Royal House in 2010 is €39.643 million.[18] There are the following categories of expenditure:

In 2009, Forbes estimated her wealth at US$300 million but gave no details to substantiate this figure.[19]

Royal Monogram of Queen Beatrix
Main article: List of titles and honours of Beatrix of the Netherlands

Queen Beatrix has held titles throughout her life, as a granddaughter or daughter of a monarch, and eventually as the Sovereign. Queen Beatrix's official title is Her Majesty Beatrix, by the Grace of God, Queen of the Netherlands, Princess of Orange-Nassau, etc. etc. etc. The triple 'etc.' refers to the title Princess of Lippe-Biesterfeld and many dormant titles still formally borne by the Queen. The Queen signs official documents with only "Beatrix". In common parlance she is The Queen or Her Majesty. But when in conversation with the Queen, the practice is to initially address her as "Your Majesty" or in Dutch as "Uwe Majesteit"[20] and thereafter as "Madam" or in Dutch as "Mevrouw" which is the official etiquette though she prefers to be called "your majesty" at all time.

Beatrix has received honours and awards from countries around the world, both during her life as princess as well as the monarch. In capacity as the Sovereign she is Grand Master of the Military Order of William (Militaire Willemsorde) and the other Dutch orders of merit. She is the 975th Member and Lady of the Most Noble Order of the Garter, the 1,187th Dame of the Order of the Golden Fleece in Spain and has received numerous other medals and decorations.

Main article: Coat of Arms of the Netherlands

Prime Ministers during the Queen's reign