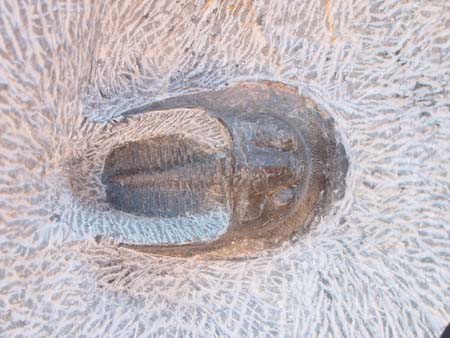 Harpetida is one of the nine orders of the extinct class Trilobita. They lived from the Upper to the Late period.

The Harpetida are characterized among trilobites by bearing a semicircular brim around the (head) which is often perforated by small pores. This brim is thought to serve as a filter-feeding apparatus. The brim stretches backward on either side of the cephalon (head) and typically has a pronounced suture along the outside.

The eyespots are typically reduced to small tubercles, though they have strong ridges stretching to the glabella (central region of the cephalon). They also typically have 12 or more thoracic segments. The pygidia are usually small.

The Harpetida were formerly included in the family , but were recently given their own order (Ebach & McNamara 2002). The subclass Librostoma was created in 1990 by to cover the orders formally included with the Ptychopariida. The name Harpidae was once used as the name for the trilobite family containing the type genus "Harpes". However, this is in conflict with the use of the same name for a family of extant s and that taxon had precedence.

* [http://www.trilobites.info/ordharpetida.htm Order Harpetida] - from A Guide to the Orders of Trilobites by Sam Gon III