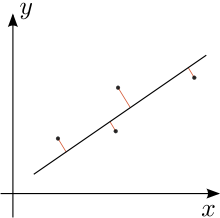 The bivariate (Deming regression) case of Total Least Squares. The red lines show the error in both x and y. This is different from the traditional least squares method which measures error parallel to the y axis. The case shown, with deviations measured perpendicularly, arises when x and y have equal variances.

Total least squares, also known as errors in variables, rigorous least squares, or (in a special case) orthogonal regression, is a least squares data modeling technique in which observational errors on both dependent and independent variables are taken into account. It is a generalization of Deming regression, and can be applied to both linear and non-linear models.

In the least squares method of data modeling, the objective function, S,

is minimized, where r is the vector of residuals and W is a weighting matrix. In linear least squares the model contains equations which are linear in the parameters appearing in the parameter vector

, so the residuals are given by

There are m observations in y and n parameters in β with m>n. X is a m×n matrix whose elements are either constants or functions of the independent variables, x. The weight matrix, W, is, ideally, the inverse of the variance-covariance matrix,

, of the observations, y. The independent variables are assumed to be error-free. The parameter estimates are found by setting the gradient equations to zero, which results in the normal equations [note 1]

Allowing observation errors in all variables

Now, suppose that both x and y are observed subject to error, with variance-covariance matrices

respectively. In this case the objective function can be written as

are the residuals in x and y respectively. Clearly these residuals cannot be independent of each other, but they must be constrained by some kind of relationship. Writing the model function as

, the constraints are expressed by m condition equations.[1]

Thus, the problem is to minimize the objective function subject to the m constraints. It is solved by the use of Lagrange multipliers. After some algebraic manipulations,[2] the result is obtained.

Where M is the variance-covariance matrix relative to both independent and dependent variables.

In practice these equations are easy to use. When the data errors are uncorrelated, all matrices M and W are diagonal. Then, take the example of straight line fitting.

It is easy to show that, in this case

showing how the variance at the ith point is determined by the variances of both independent and dependent variables and by the model being used to fit the data. The expression may be generalized by noting that the parameter β is the slope of the line.

An expression of this type is used in fitting pH titration data where a small error on x translates to a large error on y when the slope is large.

First of all it is necessary to note that the TLS problem does not have a solution in general, which was already shown in[3] The following considers the simple case where a unique solution exists without making any particular assumptions.

The computation of the TLS using singular value decomposition is described in standard texts.[4] We can solve the equation

That is, we seek to find X that minimizes error matrices E and F for A and B respectively. That is,

This can be rewritten as

where Ik is the

identity matrix. The goal is then to find

that reduces the rank of

by k. Define [U][Σ][V] * to be the singular value decomposition of the augmented matrix

where V is partitioned into blocks corresponding to the shape of A and B.

The rank is reduced by setting some of the singular values to zero. That is, we want

We can then remove blocks from the U and Σ matrices, simplifying to

This provides E and F so that

Now if VBB is nonsingular, which is not always the case (note that the behavior of TLS when VBB is singular is not well understood yet), we can then right multiply both sides by

to bring the bottom block of the right matrix to the negative identity.

A naive GNU Octave implementation of this is:

The above described way of solving the problem, provided by nonsingularity of matrix VBB, can be slightly extended by so called classical TLS algorithm.[6]

The standard implemenation of classical TLS algorithm is available through Netlib, see also.[7][8] All modern implementations based, for example, on solving a sequence of ordinary least squares problems, approximate the matrix X introduced by Van Huffel and Vandewalle. It is worth noting, that this X is, however, not the TLS solution in many cases.[9][10]

A serious difficulty arises if the variables are not measured in the same units. First consider measuring distance between a data point and the curve - what are the measurement units for this distance? If we consider measuring distance based on Pythagoras' Theorem then it is clear that we shall be adding quantities measured in different units, and so this leads to meaningless results. Secondly, if we rescale one of the variables e.g., measure in grams rather than kilograms, then we shall end up with different results (a different curve). To avoid this problem of incommensurability it is sometimes suggested that we convert to dimensionless variables—this may be called normalization or standardization. However there are various ways of doing this, and these lead to fitted models which are not equivalent to each other. One approach is to normalize by known ( or estimated ) measurement precision thereby minimizing the Mahalanobis distance from the points to the line, providing a maximum-likelihood solution.[citation needed]

In short, total least squares does not have the property of units-invariance (it is not scale invariant). For a meaningful model we require this property to hold. A way forward is to realise that residuals (distances) measured in different units can be combined if multiplication is used instead of addition. Consider fitting a line: for each data point the product of the vertical and horizontal residuals equals twice the area of the triangle formed by the residual lines and the fitted line. We choose the line which minimizes the sum of these areas. Nobel laureate Paul Samuelson proved that it is the only line which possesses a set of certain desirable properties which includes scale invariance and invariance under interchange of variables (Samuelson, 1942).[12] This line has been rediscovered in different disciplines and is variously known as the reduced major axis, the geometric mean functional relationship (Draper and Smith, 1998),[13] least products regression, diagonal regression, line of organic correlation, and the least areas line. Tofallis (2002) [14] has extended this approach to deal with multiple variables.