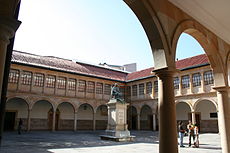 The University of Oviedo (Spanish: Universidad de Oviedo, Asturian: Universidá d'Uviéu) is a public university in Asturias (Spain). It's the only university in the region. It has three campus and research centres, located in Oviedo, Gijón and Mieres.

The University of Oviedo was established under the terms and conditions of the will of Archbishop Fernando de Valdés Salas (1483–1568), who was the General Inquisitor under Philip II of Spain, and funded by his estate. In 1574 Pope Gregory XIII granted the Papal Bull to create the university and in 1604 Philip III issued its charter. It first opened for the teaching of classes on September 21, 1608.

The ancient university had three faculties: the Faculty of Arts, which every student had to graduate from in order to continue his training in one of the other; and the Faculties of Theology and Law, sometimes known as the higher faculties.

After the French invasion of Spain the Historical Building of the University was occupied by invading troops and lectures were suspended until the War ended in 1812.

During the 19th century, a group of liberal professors tried to bring the University closer to the working class with the Extensión Universitaria (a popular education programme sponsored by the institution). However, this goal was not fully achieved, and on October 13, 1934, during the Socialist-led miners revolt in Asturias, strikers set fire to the University (including its Library and the Art Gallery) because it was seen as a bourgeois symbol. It was rebuilt after the Spanish Civil War (1936–1939).

The number of faculties has multiplied in modern university, both through subdivisions of the traditional four faculties, and through the absorption of academic disciplines which have developed within originally vocational schools, in areas such as engineering or nursing.

Nowadays, the university has 31 faculties and professional schools, offering degrees and diplomas in over 150 fields of study.

The school has a large number of places in different classrooms, total counted 6 classrooms in the building, with spaces ranging from the 171 seats in the classroom with greater capacity, up to 75 seats in the lower-capacity classroom. In addition to these classrooms, there is a room hold up to 112 places, which are usually done lectures and presentations both subjects, as final projects. Special mention also the different laboratories that school has a total of 15 laboratories. Included in this equipment of various kinds, both PC and MAC.

Rector: Vicente Gotor Santamaría (since May 2008)