The City of San Fernando with a population of 55,419 according to the 2000 census,[1] is the larger of Trinidad and Tobago's two cities and the second largest municipality after Chaguanas. It occupies 18 km² and is located in the southwestern part of the island of Trinidad. It is bounded to the north by the Guaracara River, the south by the Oropouche River, the east by the Sir Solomon Hochoy Highway, and the west by the Gulf of Paria. The former Borough of San Fernando was elevated to the status of a city on November 18, 1988. The motto of San Fernando is: "Sanitas Fortis" - In a Healthy Environment We Will Find Strength. Many local Trinidadians refer to the city with the shortened name "Sando." San Fernando is called Trinidad's "industrial capital" because of its proximity to the Pointe-a-Pierre oil refinery and many other petrochemical, LNG, iron and steel and aluminium smelters in places such as Point Lisas, Point Fortin, and La Brea. La Brea is also home to the world famous pitch lake, the chief tourist attraction in the San Fernando area, and has offshore oil and gas platform fabrication facilities, as well as a deep water harbour.

The Amerindians called the area Anaparima, which has been translated as either Single Hill or Without Water. A single hill, San Fernando Hill rises from the centre of the city. A town named San Fernando de Naparima was established by Spanish Governor Don José Maria Chacón in 1784, in honour of the heir to Spanish crown. With time, the de Naparima was dropped. 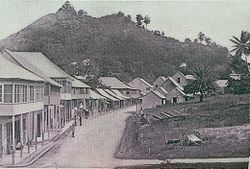 Following the 1783 Cedula of Population, many sugar plantations were established in the Naparima Plains surrounding San Fernando. The town grew as this part of the country came to dominate sugar production. This growth continued throughout the nineteenth century as consolidation in the sugar industry led to the construction of what was then the largest sugar refinery in the world, the Usine, Ste. Madeline factory a few miles east of the town. The development of cacao cultivation and the petroleum industry helped San Fernando grow since the town served as the gateway to these areas.

The growth of the town placed severe strains on the supply of water, especially during the dry season. Complaints by the burgesses of the town resulted in numerous reports by geologists and hydrologists throughout the later nineteenth and early twentieth century, but the problem was not solved until the Navet Dam was constructed in the 1930s.

The nearby oil refinery at Pointe-à-Pierre played an important role in San Fernando's development between World War II and the 1980s. The refinery was constructed by Trinidad Leaseholds Limited during World War II, and constituted one of the largest contributions to the war effort by a private company. The 'oil boom' of the 1970s and 80s led to the growth of the suburbs of San Fernando, especially Marabella (to the north) and Gasparillo (to the east) of the Pointe-à-Pierre refinery. In 1991 the boundaries of the city were extended, bringing the refinery (the largest in the Caribbean) immediately adjacent to the City's northern boundary.

It is unfortunate that due to extremely quick and often reckless development, San Fernando has lost much, if not all of its history; most of its old and interesting buildings have been demolished, and perhaps the only section of the city that reminds one of its past is in the vicinity of the San Fernando Wharf and Harris Promenade. 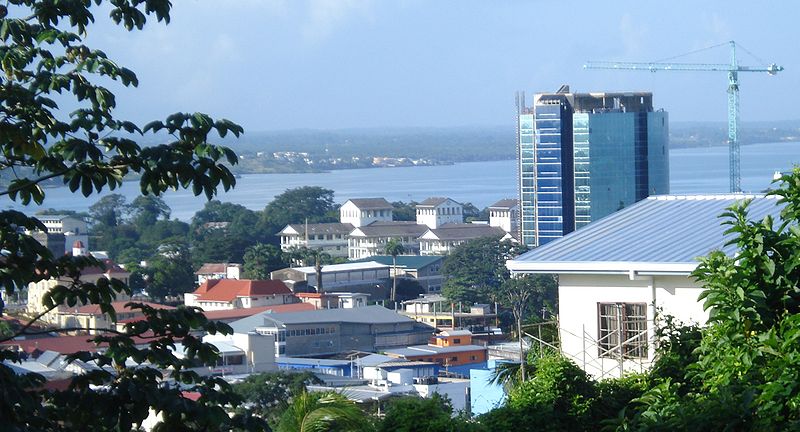 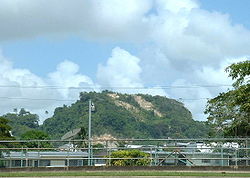 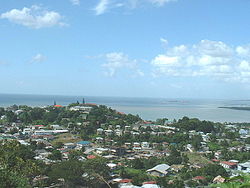 San Fernando is a coastal town, located in western Victoria County. The city is bounded by the Guaracara River to the north, the Solomon Hochoy Highway to the east, the Southern Main Road to the southeast, and the Oropouche River to the south. The city proper is located on the flanks of two hills - San Fernando Hill (more correctly, Naparima Hill) and Alexander Hill. Several mansions on the pinnacle of Alexander Hill house some of the more prominent San Fernando families. The Cipero, Vistabella, Marabella and the Godineau Rivers all enter the sea within the city limits.

San Fernando can be divided into the main town, which is located on the flanks of San Fernando Hill and the adjacent Alexander Hill, and the newer suburbs to the north, west and south. 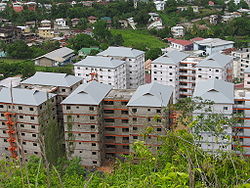 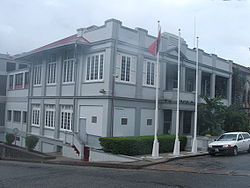 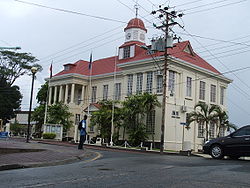 Local government administration started in 1845, when the Town Council was established and the Municipality of San Fernando came into being. Circa 1853, San Fernando was elevated to a Borough; the first Mayor was Dr. Robert Johnstone. From the simple start of a fishing village, San Fernando blossomed financially, and became "the Industrial Capital" of Trinidad and Tobago.

During its first year as a city, San Fernando was twinned with the town of La Trinité, Martinique. Ties with the French were re-established.

The City of San Fernando is divided into nine electoral districts, each represented by a Councillor. Three appointed Aldermen sit on the Council, which is chaired by the Mayor, currently Marlene Coudray.

The Electoral Districts are: 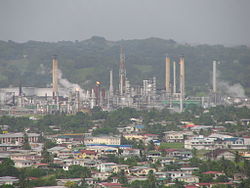 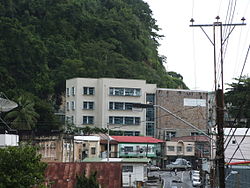 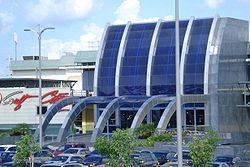 In terms of scenery, the major attraction is San Fernando Hill. The park at the top of the hill gives a view of much of western Trinidad. Venezuela, on the South American mainland, is visible on clear days.

Harris Promenade, named after Lord Harris (Governor of Trinidad 1845–54), houses City Hall, the Magistrates Court, Supreme Court, Police Station, Anglican, Roman Catholic and Methodist churches and two schools, St. Joseph's Convent, San Fernando San Fernando Boys' R.C and St. Gabriel's Girls R.C. School. There is also a bandstand, a statue of Mahatma Gandhi and the famous "last train" engine - the last train that was run in Trinidad. Usually referred to as simply "The Promenade", this area plays an important role in the life of the city. It runs parallel to the main shopping district (High Street), but lacks the busy throngs of people. It also serves as an important judging point for the J'ouvert portion of Trinidad and Tobago Carnival. The eastern end of The Promenade is known as "Library Corner" after the Carnegie Free Library (a gift from Andrew Carnegie) which was opened in 1919. Seven roads meet at Library Corner (including Harris Promenade, High Street, Pointe-à-Pierre Road, La Pique Road, Coffee Street and Mucarapo Street). Although "Library Corner" was once the transportation hub of San Fernando, this is no longer the case as taxi stands have been moved away from the centre of town in an attempt to relieve congestion. The San Fernando General Hospital is located at the western end of Harris Promenade.

Naparima Bowl is the performing arts centre in San Fernando until the National Academy of the Performing Arts, South is completed. 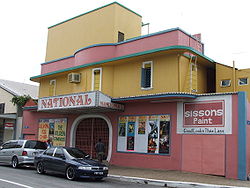 The Trinidad Guardian, Trinidad Express and the Newsday newspapers have regional offices in San Fernando.

Skinner Park was given to the people of San Fernando for recreational purposes such as football, cricket and other athletic events and training. It is also an important part of Carnival, where historically bands are judged and has been the site of the Semi-Finals of the Calypso Monarch celebrations. In a historical move, the National Steelband Panorama Finals were held here on 17 February 2007. This was the first time that the event was held somewhere other than the Queen's Park Savannah in Port of Spain, as that location was unavailable due to planned construction of a Carnival Complex on its grounds. The role of "The Park" as a sporting venue has largely been supplanted by newer Manny Ramjohn Stadium in Marabella, on the northern end of town and by Guaracara Park in Pointe-à-Pierre.

The San Fernando General Hospital serves as a major Health care service for the County of Victoria and the rest of southern Trinidad. Located west of the San Fernando Police station, east of the kings wraft, south of the shopping mall Gulf City and north of Marabella. The hospital is the third largest by size in the country of Trinidad and Tobago. With sixteen wards in the hospital and a newly built state-of-the-art emergency room and Helicopter landing area,the Hospital has four wards that female patients occupy. With state-of-the-art health equipment the hospital is one of the best in the Caribbean.

Previous railways are all defunct, but due to serious road traffic congestion a new Rapid Rail system was proposed for 2008. However, it has yet to be implemented. There is also a new ferry ('Water Taxi') service operating between Port Of Spain & San Fernando with routes being expanded to Chaguanas and Chaguaramas

Electric generation is mostly handled by Powergen, while electrical distribution is handled by the Trinidad and Tobago Electricity Commission (T&TEC). Powergen has natural gas-fired generation plants at Point Lisas, Penal and Wrightson Road in Port of Spain. Additional power can be supplied from power generation facilities controlled by Trinity Power at Dow Village.

Water and sewerage are under the purview of the Water and Sewerage Authority of Trinidad and Tobago (WASA).