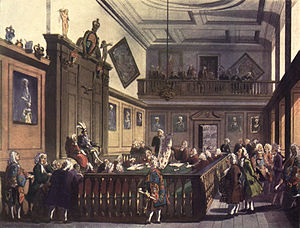 A session of the Court of Chivalry being held in the College of Arms, depicted in 1809.

Her Majesty's High Court of Chivalry of England and Wales is a civil court in England. It has had jurisdiction in cases of the misuse of heraldic arms since the fourteenth century.

The sole judge is now the hereditary Earl Marshal of England, the Duke of Norfolk, though he normally delegates his responsibility to a professional lawyer as his Surrogate. Before 1521, the Lord High Constable of England also presided, but that office was abolished as a permanent institution (it is "revived" only for a Coronation).

The court was last convened in 1954 for Manchester Corporation v Manchester Palace of Varieties Ltd [1955] P 133; [1955] 1 All ER 387. The Palace theatre displayed the arms of Manchester City Council both inside and on its seal and this usage implied that it was linked with the City's Council. The City Council had requested that the theatre cease the usage and had met with refusal. The court ruled in favour of Manchester City Council. This was the first time that the Court of Chivalry had sat for approximately two centuries, since 1732. The opening part of the judgement involved an analysis leading to the determination that the Court of Chivalry still existed.

Historically, the court was also known as Curia Militaris, the Court of the Constable and the Marshal, and the Earl Marshal's Court.[1]

In Scotland, these types of cases are heard in the Court of the Lord Lyon, which is a standing civil and criminal court, with its own Procurator Fiscal (Public Prosecutor) under the Scottish legal system.

Appeals from the High Court of Chivalry

Since 1832, appeals from the High Court of Chivalry are to be heard by the Judicial Committee of the Privy Council.[2] Before 1 February 1833, in common with the admiralty and ecclesiastical courts, appeal from the Court was to the Crown in Chancery, with appeals being heard by Commissioners appointed by letters patent under the Great Seal in each case.[3] Sittings by these Commissioners became known as the "High Court of Delegates" by the time of the 1832 Act.[4]

Lieutenant, Assessor and Surrogate to the Earl Marshal, High Court of Chivalry

Cryer of the High Court of Chivalry