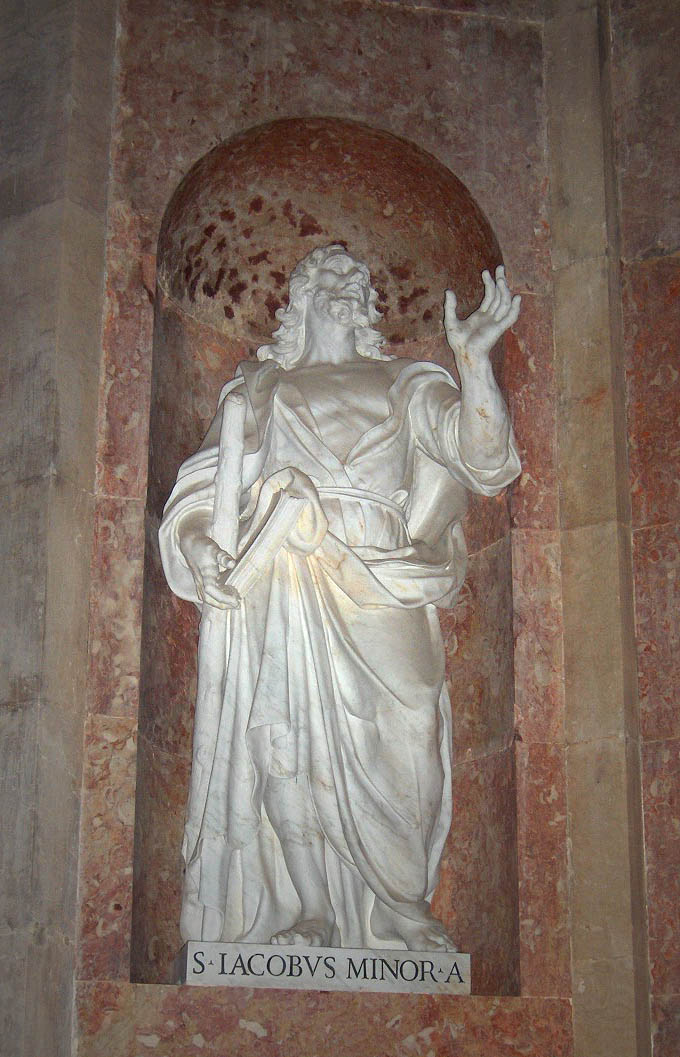 James, son of Alphaeus was one of the of of . He is generally identified with James the Less, and is more commonly known by that name in church tradition. [He is also labelled "the minor", "the little", "the lesser", or "the younger", according to translation.]

Possible identity of James son of Alphaeus and James the Less

Since there was already a more prominent James () among the twelve apostles, equating James son of Alphaeus with James the Less made sense. (James son of Zebedee was sometimes called "James the Great"). However, it also made it imperative to identify , the husband of Mary, with Alphaeus, the father of the Apostle James. [ is only mentioned in bibleref|John|19:25; see the article. Some avoided this problem by identifying Clopas as Mary's father and Alphaeus as Mary's husband.] (For the argument on this, see .) This identification was accepted by early church leaders and, therefore, tradition knows him more commonly as Saint James the Less.

Modern Biblical scholars are divided on whether this identification is correct. finds it unlikely. [, "A Marginal Jew volume 3", p.201. "There are no grounds for identifying James of Alphaeus -- as church tradition has done -- with James the Less"] Amongst evangelicals, the "New Bible Dictionary" supports the traditional identification, [New Bible Dictionary, 2nd Edition (IVP 1982), "James" entry (by P.H.Davids)] while ["The Expositor's Bible Commentary CDROM, commentary on Matthew (by ), commentary on Matthew 10:2-4] and ["Luke", by (Baker 1994), commentary on Luke 6:15] both regard the identification as possible, but not certain.

Possible identity with James the Just

(a brother or relative of Jesus) served for thirty years as head of the Church at Jerusalem and was killed in 62 AD. [Josephus, "Antiquities", 2.9.1] The identification of James son of Alphaeus with the brother of Jesus was supported by and therefore widely accepted in the , [ [http://www.newadvent.org/cathen/08280a.htm Catholic Encyclopedia: Saint James the Less] ] while and churches tend to distinguish between "James son of Alphaeus" and "James the brother of the Lord".

Another is also the name of the father of (also known as Levi) in bibleref|Mark|2:14 which has led some to conclude that James and Matthew might have been brothers. However, there is no Biblical account of the two being called brothers, even in the same context where John and James or Peter and Andrew are described as being brothers which suggests rather that the father of Matthew and the father of James simply shared the same name.

A tradition holds that St James, though strongly clinging to Jewish law, was sentenced to death for having violated the . This however, is highly unlikely as the Jewish authorities did not practice crucifixion, and unless a possible rebellion was at hand, the Roman authority would not involve themselves in Jewish religious affairs. He is reported to have been martyred by at in , where he was preaching the Gospel. A carpenter's saw is the symbol associated with him in because it is also noted that his body was later sawed to pieces [ [http://latter-rain.com/ltrain/jamesle.htm James the Less] on the Latter Rain page, retrieved , 2007. ]