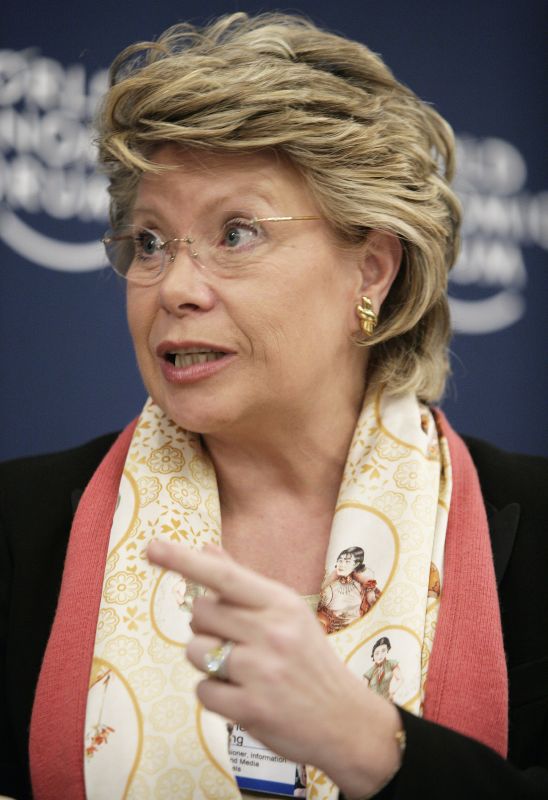 Viviane Reding (born in ) is a politician, currently serving as er for Information Society and Media. Before starting a professional career as a for the leading newspaper in Luxembourg, the "", she obtained a doctorate in at the Sorbonne. From 1986 to 1998, she was President of the Luxembourg Union of Journalists.

She is married and has three children.

She then became leader of Luxembourg’s delegation in the from 1989 to 1999 and she was a Member of the group's office.

From 1999 to 2004, she was appointed Commissioner for Education, Culture, Youth, Media and Sport and in2004 her responsibility changed to Information Society and Media. She is currently looking into the regualtion on prices of roaming within the EU.

In 2008, the EU Parliament voted to pass the "Telecom Package" which would render the entire markets of the region into one market, making it easier to sell internet and phone services in EU, with the goal of making the telecom prices cheaper for customers in EU. Among the many amendments to the proposal, amendment 138 was voted in favor of with 574 votes for, and 73 against. This particular amendment would require any termination of internet subscription to be heard in front of a judge. Viviane Reding said afterward that she hoped she could force the amendment of by the Commission, thus to some observers overruling the democratic process of the 647 cast votes. [http://arstechnica.com/news.ars/post/20080928-eu-parliament-judges-must-be-involved-in-three-strikes-rules.html EU Parliament: Only judges can order 'Net disconnections]