College of the Ozarks

College of the Ozarks

College of the Ozarks is a private, Christian liberal-arts college, with its campus at Point Lookout near Branson and Hollister, Missouri, United States. It is 40 miles (64 km) south of Springfield on a 1,000-acre (400 ha) campus, overlooking Lake Taneycomo. The college has an enrollment of 1,500, a student-to-faculty ratio of approximately 16:1, over 30 academic majors, and degrees in Bachelor of Arts or Bachelor of Science.

The College charges no tuition for full-time students, due to its student work program and donations. The program requires students to work 15 hours a week at an on-campus work station and two 40-hour work weeks during breaks. A summer work program is available to cover room and board costs.[2] The college refers to itself as "Hard Work U.",[3] and places emphasis in character education. Its mission since its establishment in 1906 is "to provide the advantages of a Christian education for youth of both sexes, especially those found worthy, but who are without sufficient means to procure such training."

The school was first proposed in 1901 as a high school by James Forsythe, pastor of the Forsyth, Missouri Presbyterian Church. Forsythe was from the St. Louis, Missouri area.

Forsythe was said to have been inspired to make the proposal after encountering a boy on a squirrel hunt who told him that his parents couldn't afford to send him to the closest high school 40 miles (64 km) away in Springfield, Missouri.[4]

The School of the Ozarks opened on September 12, 1907, in a 75-by-50-foot (22.86-by-15.24-meter) building atop Mount Huggins (named for brothers Louis and William Huggins from St. Joseph, Missouri who were among the founders of Nabisco[5] and had donated money for the school). In its first term it had enrollment of 180 with 36 boarders.[6]

From the start, the school adopted its practice of having its students work instead of paying tuition.

On January 12, 1915, the original building burned. School was temporarily held in Forsyth with five students graduating in 1915.[4]

The school then relocated farther up the White River at Point Lookout, Missouri on a 16-acre (6.47 ha) campus. The central building of the campus was the Maine Hunting and Fishing Club building which had been transported to the site by sportsmen from the 1904 St. Louis World's Fair where it been the State of Maine exhibit. It was renamed the Dobyns Building in honor of W. R. Dobyns, president of the trustees at the time. The building burned on February 1, 1930.[7][8]

In the 1920s what would become the Ralph Foster Museum depicting Ozark heritage had its start in the basement of the boys' dormitory: Abernathy Hall.

In 1934 the Fruitcake and Jelly Kitchen opened to offer work for students. It is now one of 90 work stations. More than 100 fruitcakes are now baked daily.[9]

In the 1950s under Robert M. Good and M. Graham Clark the school dramatically changed.

The campus expanded to 1,400 acres (567 ha), the school's Gothic chapel was built on the location of the original Dobyns Building and a hospital was added.

In 1956, with high schools becoming increasingly available in the area, the school became a junior college.

The Museum of the Ozarks took over the entire Abernathy Building and was renamed the Good Museum for president Good. It was later renamed for country music pioneer Ralph D. Foster, who donated money and exhibits for it. The museum expanded in 1969, 1977 and 1991.[10] Among the exhibits is an original George Barris 1921 modified Oldsmobile Beverly Hillbillies truck donated by series creator Paul Henning who was inspired to do the show after a Boy Scout camping trip in the Ozarks. The museum also contains a large firearm display including a rifle belonging to Pancho Villa.[11] 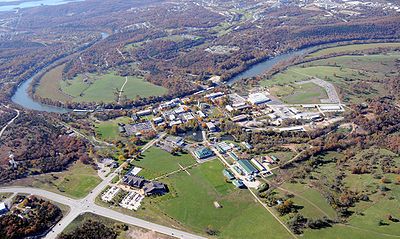 Aerial photo of College of the Ozarks with Lake Taneycomo, Branson, and Table Rock Lake beyond

In 1973 the Wall Street Journal described College of the Ozarks as "Hard Work U." The name has stuck as school motto and the school has trademarked it.[13]

In 1994 the AAUP American Association of University Professors censured and condemned "The governing board and administration of College of the Ozarks" for actions which "violate the principles of academic freedom and tenure". The investigation described the atmosphere of the campus as "a strange blend of Orwell and Jonestown".[14]

In the 2003-2004 semesters a professor at C of O highlighted that one of the college's dean's, Larry Cockrum, had received his P.H.D. from Crescent City Christian College (a fraudulent college run out of a coach's basement).[15] The Professor which brought this information to light was then suspended for the 2004 semester, and his contract was not to be renewed for the fall semester. C of O's president Jerry C. Davis defended the dean with the fraudulent degree, while terminating the muckraker. The Dean, Larry Cockrum, later resigned.[16]

In an Associated Press story, featured on the online edition of the Saint Louis Post-Dispatch on Wednesday, February 2, 2011 (with some details from the Springfield News Leader) it was announced that former President George W. Bush would be the scheduled speaker at an event on Thursday, April 7, 2011. He will speak on the topic "Leadership and Character." Past speakers at the event have included former U.S. Secretary of State and Chairman of the Joint Chiefs of Staff General Colin Powell, and former 2008 Republican Party Vice Presidential nominee and Governor of Alaska Sarah Palin.

The College of the Ozarks Bobcats and Lady Cats compete on the National Association of Intercollegiate Athletics (NAIA) level in the Midlands Collegiate Athletic Conference. Men compete in baseball and basketball. Women compete in basketball and volleyball. The 2005-2006 men's basketball team won the NAIA Division II national championship, while the Lady Cats were the runner up. The men's team was second in the basketball tournament in 2000 and 2009.[17] Since 2000 Keeter Gymnasium has been host to the NAIA Division II Basketball Championship games.