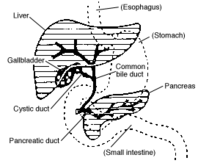 Prominent symptoms of cholangiocarcinoma include abnormal liver function tests, abdominal pain, jaundice, weight loss, and sometimes generalized itching, fever, or changes in stool or urine color. The disease is diagnosed through a combination of blood tests, imaging, endoscopy, and sometimes surgical exploration. Known risk factors for cholangiocarcinoma include primary sclerosing cholangitis (an inflammatory disease of the bile ducts), congenital liver malformations, infection with the parasitic liver flukes Opisthorchis viverrini or Clonorchis sinensis, and exposure to Thorotrast (thorium dioxide), a chemical formerly used in medical imaging. However, most patients with cholangiocarcinoma have no specific risk factors.

Cholangiocarcinoma is considered to be an incurable and rapidly lethal disease unless all of its tumors can be fully resected (cut out surgically). There is no potentially curative treatment except surgery, but most patients have advanced because of this inoperable disease after diagnosis. Patients with cholangiocarcinoma are generally managed, though never cured, with chemotherapy or radiation therapy as well as palliative care measures, and these are also used as adjuvant therapies post-surgically in cases where resection has been successful. Some areas of ongoing medical research in cholangiocarcinoma include the use of newer targeted therapies (such as erlotinib) or photodynamic therapy for treatment, and the concentration of byproducts of cancer stromal cell formation in the blood for diagnosis.

Although there are at least three staging systems for cholangiocarcinoma (e.g. Bismuth, Blumgart, American Joint Committee on Cancer) none have been shown to be useful in predicting survival.[3] The most important staging issue is whether the tumor can be surgically removed, or whether it is too advanced or invasive for surgical treatment. Often, this determination can only be made at the time of surgery.[4]

General guidelines for operability include:[5][6] 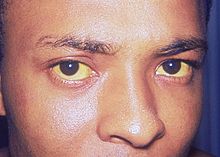 Yellowing of the skin and eyes (jaundice)

The most common physical indications of cholangiocarcinoma are abnormal liver function tests, jaundice (yellowing of the eyes and skin), which occurs only, when bile ducts are blocked by the tumor, abdominal pain (30%–50%), generalized itching (66%), weight loss (30%–50%), fever (up to 20%), or changes in stool or urine color.[7][8] To some extent, the symptoms depend upon the location of the tumor: Patients with cholangiocarcinoma in the extrahepatic bile ducts (outside the liver) are more likely to have jaundice, while those with tumors of the bile ducts within the liver often have pain without jaundice.[9]

Blood tests of liver function in patients with cholangiocarcinoma often reveal a so-called "obstructive picture," with elevated bilirubin, alkaline phosphatase, and gamma glutamyl transferase levels, and relatively normal transaminase levels. Such laboratory findings suggest obstruction of the bile ducts, rather than inflammation or infection of the liver, as the primary cause of the jaundice.[4] CA19-9 is elevated in most cases.

Although most patients present without any known risk factors evident, a number of risk factors for the development of cholangiocarcinoma have been described; in the Western world, the most common of these is primary sclerosing cholangitis (PSC), an inflammatory disease of the bile ducts which is in turn closely associated with ulcerative colitis (UC).[10] Epidemiologic studies have suggested that the lifetime risk of developing cholangiocarcinoma for a person with PSC is 10%–15%,[11] although autopsy series have found rates as high as 30% in this population.[12] The mechanism by which PSC increases the risk of cholangiocarcinoma is not well understood.

Certain parasitic liver diseases may be risk factors as well. Colonization with the liver flukes Opisthorchis viverrini (found in Thailand, Laos, and Malaysia) or Clonorchis sinensis (found in Japan, Korea, and Vietnam) has been associated with the development of cholangiocarcinoma.[13][14][15] Patients with chronic liver disease, whether in the form of viral hepatitis (e.g. hepatitis B or C),[16][17][18] alcoholic liver disease, or cirrhosis from other causes, are at increased risk of cholangiocarcinoma.[19][20] HIV infection was also identified in one study as a potential risk factor for cholangiocarcinoma, although it was unclear whether HIV itself or correlated factors (e.g. hepatitis C infection) were responsible for the association.[19]

Although cholangiocarcinoma is known to be an adenocarcinoma of the epithelial cells lining the biliary tract, the actual cell of origin is unknown, although recent evidence has suggested that it may arise from a pluripotent hepatic stem cell.[31][32][33] Cholangiocarcinoma is thought to develop through a series of stages — from early hyperplasia and metaplasia, through dysplasia, to the development of frank carcinoma — in a process similar to that seen in the development of colon cancer.[34] Chronic inflammation and obstruction of the bile ducts, and the resulting impaired bile flow, are thought to play a role in this progression.[34][35][36]

Histologically, cholangiocarcinomas may vary from undifferentiated to well-differentiated. They are often surrounded by a brisk fibrotic or desmoplastic tissue response; in the presence of extensive fibrosis, it can be difficult to distinguish well-differentiated cholangiocarcinoma from normal reactive epithelium. There is no entirely specific immunohistochemical stain that can distinguish malignant from benign biliary ductal tissue, although staining for cytokeratins, carcinoembryonic antigen, and mucins may aid in diagnosis.[37] Most tumors (>90%) are adenocarcinomas.[38]

Cholangiocarcinoma is definitively diagnosed from tissue, i.e. it is proven by biopsy or examination of the tissue excised at surgery. It may be suspected in a patient with obstructive jaundice. Considering it as the working diagnosis may be challenging in patients with primary sclerosing cholangitis (PSC); such patients are at high risk of developing cholangiocarcinoma, but the symptoms may be difficult to distinguish from those of PSC. Furthermore, in patients with PSC, such diagnostic clues as a visible mass on imaging or biliary ductal dilatation may not be evident.

There are no specific blood tests that can diagnose cholangiocarcinoma by themselves. Serum levels of carcinoembryonic antigen (CEA) and CA19-9 are often elevated, but are not sensitive or specific enough to be used as a general screening tool. However, they may be useful in conjunction with imaging methods in supporting a suspected diagnosis of cholangiocarcinoma.[39]

Ultrasound of the liver and biliary tree is often used as the initial imaging modality in patients with suspected obstructive jaundice.[40][41] Ultrasound can identify obstruction and ductal dilatation and, in some cases, may be sufficient to diagnose cholangiocarcinoma.[42] Computed tomography (CT) scanning may also play an important role in the diagnosis of cholangiocarcinoma.[43][44][45]

Imaging of the biliary tree 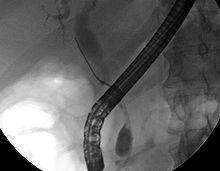 While abdominal imaging can be useful in the diagnosis of cholangiocarcinoma, direct imaging of the bile ducts is often necessary. Endoscopic retrograde cholangiopancreatography (ERCP), an endoscopic procedure performed by a gastroenterologist or specially trained surgeon, has been widely used for this purpose. Although ERCP is an invasive procedure with attendant risks, its advantages include the ability to obtain biopsies and to place stents or perform other interventions to relieve biliary obstruction.[4] Endoscopic ultrasound can also be performed at the time of ERCP and may increase the accuracy of the biopsy and yield information on lymph node invasion and operability.[46] As an alternative to ERCP, percutaneous transhepatic cholangiography (PTC) may be utilized. Magnetic resonance cholangiopancreatography (MRCP) is a non-invasive alternative to ERCP.[47][48][49] Some authors have suggested that MRCP should supplant ERCP in the diagnosis of biliary cancers, as it may more accurately define the tumor and avoids the risks of ERCP.[50][51][52] 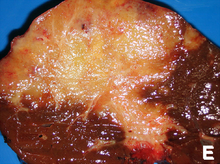 Photograph of cholangiocarcinoma in human liver.

Surgical exploration may be necessary to obtain a suitable biopsy and to accurately stage a patient with cholangiocarcinoma. Laparoscopy can be used for staging purposes and may avoid the need for a more invasive surgical procedure, such as laparotomy, in some patients.[53][54] Surgery is also the only curative option for cholangiocarcinoma, although it is limited to patients with early-stage disease.

Histologically, cholangiocarcinomas are classically well to moderately differentiated. Immunohistochemistry is useful in the diagnosis and can be used to differentiate a cholangiocarcinoma primary tumor from metastasis of most other gastrointestinal tumors.[55] Cytological scrapings are often nondiagnostic.[56]

Cholangiocarcinoma is considered to be an incurable and rapidly lethal disease unless all the tumors can be fully resected (that is, cut out surgically). Since the operability of the tumor can only be assessed during surgery in most cases,[57] a majority of patients undergo exploratory surgery unless there is already a clear indication that the tumor is inoperable.[4]

Adjuvant therapy followed by liver transplantation may have a role in treatment of certain unresectable cases.[58]

If the tumor can be removed surgically, patients may receive adjuvant chemotherapy or radiation therapy after the operation to improve the chances of cure. If the tissue margins are negative (i.e. the tumor has been totally excised), adjuvant therapy is of uncertain benefit. Both positive[59][60] and negative[9][61][62] results have been reported with adjuvant radiation therapy in this setting, and no prospective randomized controlled trials have been conducted as of March 2007. Adjuvant chemotherapy appears to be ineffective in patients with completely resected tumors.[63] The role of combined chemoradiotherapy in this setting is unclear. However, if the tumor tissue margins are positive, indicating that the tumor was not completely removed via surgery, then adjuvant therapy with radiation and possibly chemotherapy is generally recommended based on the available data.[64]

The majority of cases of cholangiocarcinoma present as inoperable (unresectable) disease[65] in which case patients are generally treated with palliative chemotherapy, with or without radiotherapy. Chemotherapy has been shown in a randomized controlled trial to improve quality of life and extend survival in patients with inoperable cholangiocarcinoma.[66] There is no single chemotherapy regimen which is universally used, and enrollment in clinical trials is often recommended when possible.[64] Chemotherapy agents used to treat cholangiocarcinoma include 5-fluorouracil with leucovorin,[67] gemcitabine as a single agent,[68] or gemcitabine plus cisplatin,[69] irinotecan,[70] or capecitabine.[71] A small pilot study suggested possible benefit from the tyrosine kinase inhibitor erlotinib in patients with advanced cholangiocarcinoma.[72]

Photodynamic therapy, an experimental approach in which patients are injected with a light-sensitizing agent and light is then applied endoscopically directly to the tumor, has shown promising results compared to supportive care in two small randomized controlled trials. However, its ultimate role in the management of cholangiocarcinoma is unclear at present.[73][74] Photodynamic Therapy has been shown to improve survival and quality of life [75]

Surgical resection offers the only potential chance of cure in cholangiocarcinoma. For non-resectable cases, the 5-year survival rate is 0% where the disease is inoperable because distal lymph nodes show metastases,[76] and less than 5% in general.[77] Overall median duration of survival is less than 6 months[78] in inoperable, untreated, otherwise healthy patients with tumors involving the liver by way of the intrahepatic bile ducts and hepatic portal vein.

For surgical cases, the odds of cure vary depending on the tumor location and whether the tumor can be completely, or only partially, removed. Distal cholangiocarcinomas (those arising from the common bile duct) are generally treated surgically with a Whipple procedure; long-term survival rates range from 15%–25%, although one series reported a five-year survival of 54% for patients with no involvement of the lymph nodes.[79] Intrahepatic cholangiocarcinomas (those arising from the bile ducts within the liver) are usually treated with partial hepatectomy. Various series have reported survival estimates after surgery ranging from 22%–66%; the outcome may depend on involvement of lymph nodes and completeness of the surgery.[80] Perihilar cholangiocarcinomas (those occurring near where the bile ducts exit the liver) are least likely to be operable. When surgery is possible, they are generally treated with an aggressive approach often including removal of the gallbladder and potentially part of the liver. In patients with operable perihilar tumors, reported 5-year survival rates range from 20%–50%.[81]

The prognosis may be worse for patients with primary sclerosing cholangitis who develop cholangiocarcinoma, likely because the cancer is not detected until it is advanced.[12][82] Some evidence suggests that outcomes may be improving with more aggressive surgical approaches and adjuvant therapy.[83]

Multiple studies have documented a steady increase in the incidence of intrahepatic cholangiocarcinoma over the past several decades; increases have been seen in North America, Europe, Asia, and Australia.[89] The reasons for the increasing occurrence of cholangiocarcinoma are unclear; improved diagnostic methods may be partially responsible, but the prevalence of potential risk factors for cholangiocarcinoma, such as HIV infection, has also been increasing during this time frame.[19]