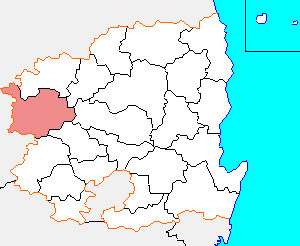 Sangju is a city in Province, . Although Sangju is rather rural, it is very old and was once a key city. Along with , it gives rise to half of the name of the provinces. Sangju's nickname is "Sam Baek" ("Three White Things"), representing three agricultural products in which it abounds: , cocoons, and dried s.

All of Sangju lies in the valley of the . Various tributaries flow into the Nakdong in Sangju, including the Yeong (which rises in Mungyeong). The land slopes down from the in the east to the river basin. The highest elevation in Sangju is found at the top of , 1,058 m above . Like most of South Korea, the terrain is generally hilly, with only a few flat areas along the rivers. Because of this rugged terrain, 67% of the land in Sangju is classified as "vacant," unused for agricultural or other purposes.Fact|date=February 2007

Namsan mountain is located in the city.

The climate of Sangju is inland. The average annual temperature is between 12°C and 13°C, fluctuating from an August average of 26°C to a chilly January mean of -3°C. It should be noted that the temperature in the mountainous northwest is generally substantially colder. The mean annual rainfall is 1,050 mm.

Sangju has played an important role in much of Korean history. It first emerges after the conquest of the area, in which minor states such as (in ) and (in ) were subjugated. The dates at which these conquests occurred are open to dispute, but it is apparent that the area was under firm Silla control by 505, and probably for some time before then.

Under Silla, the fortress of Sangju was one of the nine "ju", or provincial administrative units, into which the portions of the kingdom near were divided. It played a critical role in regulating traffic along the east-west transit route which connected the Han River valley in the west (which Silla acquired in 553) with Gyeongju area. It would have been the first major city that Buddhist missionaries from would have reached when travelling down from Pass in the 6th century.

During the tumultuous decline of in the late 9th century, a number of rebellions occurred in Sangju, as they did throughout the country. Notable among them are the rebellions of , who seized the fortress of Sangju and declared himself a general, and the Silla noble , who re-established the kingdom of Sabeol-guk in the Sabeol-myeon area until he was overthrown by the leader . Ajagae surrendered to Wanggeon in 918.

In 1895, as part of a general reorganization of local government, Sangju was designated Sangju-gun (Sangju County). In 1914, its boundaries were extended to cover Hamchang County, present-day Hamchang-eup. On , separate administrative divisions were created for the city center (which was called Sangju City) and the outskirts (which continued to be called Sangju County). On , the city and county were reunified to create the present-day entity of Sangju City.

Under Japanese occupation, the occupation government made various efforts to modernize local agriculture and resource extraction. The railroad through Sangju was completed in 1924, and around the same time the agricultural-training institution which would become Sangju National University was established.

The legislative and executive branches of Sangju City are headed by officials elected by popular vote. This has been the case across South Korea since 1991, when local representative government was resumed after a thirty-year suspension. Under current South Korean law, elections are held once every four years. The most recent elections were held in June 2002.

The mayor of Sangju is Kim Geun-su (김근수), of the Grand National, or Hannara, Party.

The of Sangju is the chief legislative organ of the district. Like the mayor, the members of the city council are elected every four years. The chairman of the Sangju city council is (김기환). The council which began serving in 2002 is the fourth council to represent the present-day entity of Sangju City; the first was formed from the merger of the pre-existing councils of Sangju City and Sangju County. There are 23 members. One member is elected from each eup, myeon, and dong, except for Jinheung-dong and Dongseong-dong, which share a single representative.

The regional court of Sangju oversees local courts in Mungyeong City and , in addition to Sangju. It reports to the provincial court in .

The area has been famed for (silk production) since Silla times. Currently 243,000 m² of land are engaged in silk production, bringing in about 434 million won annually. In addition, numerous other s are farmed in the area. The most important agricultural product is , in the production of which Sangju is 7th in the country, with 169.13 km² in production yielding 162.9 billion won. Other important products include s, s, s, and s.

Sangju today is an important regional center of industry and commerce as well, exerting a significant economic effect on neighboring areas. This is facilitated by its strong transit connections (see "Transportation, below).

Sangju is divided into one eup, seventeen myeon, and six dongs. These 24 primary divisions are made up of 361 ri.

The lone eup is Hamchang, on the city's northern border with Mungyeong.

The railroad runs through Sangju city, connecting to the main in . It is thus possible to take passenger trains from Sangju to major southeastern cities such as Daegu and Busan. The Gyeongbuk Line carries both passenger and freight traffic, and provides an important link for people and businesses in the of Sangju. Aside from Sangju Station itself, stations are located in Sabeol-myeon (Baegwon Station), Gonggeom-myeon (Yangjeom Station), and Hamchang-eup (Hamchang Station) north of the city, and Cheongni-myeon (Cheongni Station) and Gongseong-myeon (Oksan Station) to the south.

In addition, national highways connect Sangju with many neighboring cities and towns. For example, National Road 3 has served as the traditional artery connecting Sangju with Mungyeong and , and National Road 25 continues to play an important role tying Sangju to its neighbor on the western side of the Sobaek mountains, .

There are 43 elementary schools in Sangju, including eleven branch schools. There are 17 public middle schools in the city, including two branch schools. Of these, one each is reserved exclusively for male and female students. In addition, there are five private middle schools, of which two are female-only, two male-only, and one coeducational. The city also boasts six private and six public high schools: four of the private and two of the public institutions are gender-segregated. Half of the high schools offer technical training, and half maintain a general academic focus.

Sangju is home to , a government-administered institution with a focus on agricultural technology. Many young people of college age leave the area to attend schools in the or other major cities.