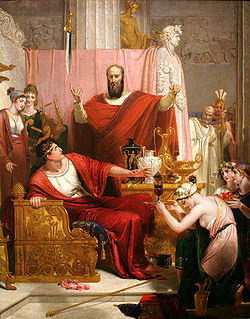 In Richard Westall's Sword of Damocles, 1812, the boys of Cicero's anecdote have been changed to maidens for a neoclassical patron, Thomas Hope.

/ˈdæməkliːz/; Greek: Δαμοκλῆς, Damoklēs; literally: "Fame of the People") is a figure featured in a single moral anecdote commonly referred to as "the Sword of Damocles,"[1][2] which was a late addition to classical Greek culture. The figure belongs properly to legend rather than Greek myth.[3] The anecdote apparently figured in the lost history of Sicily by Timaeus of Tauromenium (c. 356–260 BC). The Roman orator Cicero may have read it in Diodorus Siculus. He made use of it in his Tusculan Disputations, V. 61–2,[4] by which means it passed into the European cultural mainstream.

The sword of Damocles

The Damocles of the anecdote was an obsequious courtier in the court of Dionysius II of Syracuse, a fourth century BC tyrant of Syracuse, Italy. Pandering to his king, Damocles exclaimed that, as a great man of power and authority surrounded by magnificence, Dionysius was truly extremely fortunate. Dionysius then offered to switch places with Damocles, so that Damocles could taste that very fortune first hand. Damocles quickly and eagerly accepted the King's proposal. Damocles sat down in the king's throne surrounded by every luxury, but Dionysius arranged that a huge sword should hang above the throne, held at the pommel only by a single hair of a horse's tail. Damocles finally begged the tyrant that he be allowed to depart, because he no longer wanted to be so fortunate.[2][5]

Dionysius had successfully conveyed a sense of the constant fear in which the great man lives. Cicero uses this story as the last in a series of contrasting examples for reaching the conclusion he had been moving towards in this fifth Disputation, in which the theme is that virtue is sufficient for living a happy life.[6] Cicero asks:

Does not Dionysius seem to have made it sufficiently clear that there can be nothing happy for the person over whom some fear always looms?[7]

In culture, art, and literature

The sword of Damocles is frequently used in allusion to this tale, epitomizing the imminent and ever-present peril faced by those in positions of power. More generally, it is used to denote the sense of foreboding engendered by a precarious situation,[8] especially one in which the onset of tragedy is restrained only by a delicate trigger or chance. Shakespeare's Henry IV expands on this theme: "Uneasy lies the head that wears a crown";[9] compare the Hellenistic and Roman imagery connected with the insecurity offered by Tyche and Fortuna.

The Roman 1st century B.C. poet Horace also alluded to the sword of Damocles in Poem 29 of the Third Book of Odes, in which he extolled the virtues of living a simple, rustic life, favoring such an existence over the myriad threats and anxieties that accompany holding a position of power. In this appeal to his friend and patron, the aristocratic Maecenas, Horace describes the "Siculae dapes" or "Sicilian feasts" as providing no savory pleasure to the man, "above whose impious head hangs a drawn sword (destrictus ensis)."

The phrase has also come to be used in describing any situation with a sense of impending doom, especially when the peril is (or should be, to the astute observer) visible and close at hand—regardless of whether the victim is in a position of power. The American president John F. Kennedy compared the omnipresent threat of nuclear annihilation to a sword of Damocles hanging over the people of the world.[10]

Woodcut images of the sword of Damocles as an emblem appear in sixteenth and seventeenth-century European books of devices, with moralizing couplets or quatrains, with the import METUS EST PLENUS TYRANNIS, lit. "Fear is plentiful for tyrants", i.e., "A tyrant's fear is complete fear" — as it is the tyrant's place to sit daily under the sword.[11] In Wenceslas Hollar's Emblemata Nova (London, no date), a small vignette shows Damocles under a canopy of state, at the festive table, with Dionysius seated nearby; the etching, with its clear political moral, was later used by Thomas Hobbes to illustrate his Philosophicall Rudiments concerning Government and Society (London 1651).[12]