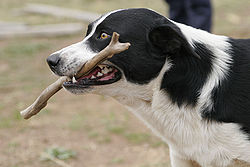 Many dogs can be trained easily to retrieve objects like this stick.

Dog intelligence is the ability of a dog to learn, think, and solve problems. Dog trainers, owners, and researchers have as much difficulty agreeing on a method for testing canine intelligence as they do for human intelligence. One specific difficulty is confusing a breed's genetic characteristics and a dog's obedience training with intelligence.

Certain breeds, like Border Collies, Poodles, German Shepherds, Shetland Sheepdogs, Rottweilers, Doberman Pinschers, Labrador Retrievers, Papillons, Australian Cattle Dogs and Golden Retrievers, are claimed by some to be "smarter" breeds of dogs because of their obedience. However, the ability and willingness to learn and obey commands is not the only possible measurement of intelligence. Other breeds, such as sled dogs and sight hounds, demonstrate intelligence in other ways[clarification needed].

Dogs are pack animals. They understand social structure and obligations, and are capable of interacting with other members of the pack. Adult canines train their young by "correcting" them when they behave in an unacceptable manner (such as biting too hard or eating out of turn) and reward them for acceptable behavior, by playing with them, feeding them, or cleaning them.

They are also den animals. This means that they can easily learn behavior related to keeping the den clean (such as housebreaking) and relaxing in an enclosed area (such as a crate during travel or for training).

Some breeds have been selectively bred for hundreds or thousands of years for the quality of learning quickly. That quality has been downplayed for other breeds in favor of other characteristics like the ability to track or hunt game, or to fight other animals. The capacity to learn basic obedience and complicated behavior, however, is inherent in all dogs. Owners must simply be more patient with some breeds than with others.

Nonetheless, inherited behavior is not necessarily an indicator of intelligence. For example, a sheep herding breed, like a Border Collie, would be expected to learn how to herd sheep very quickly and might even perform the job with little training. The same breed, however, would be a challenge to train how to point and retrieve game. A Pointer often points to game instinctively and naturally retrieves game without damaging it, but training it to herd sheep would be difficult if not impossible.

The meaning of "intelligence" in general, not only in reference to dogs, is hard to define. Some tests measure problem-solving abilities and others test the ability to learn in comparison to others of the same age. Defining it for dogs is just as difficult. It is likely that dogs do not have the ability to premeditate an action to solve a problem. Some dogs may, however, have more drive to keep trying various things until they accidentally reach a solution and still others might have more ability to make the association between the "accident" and the result.[citation needed]

For example, the ability to learn quickly could be a sign of intelligence. It could be interpreted as a sign of blind subservience and a desire to please. In contrast, some dogs who do not learn very quickly may have other talents. An example is breeds that are not particularly interested in pleasing their owners, such as Siberian Huskies. Huskies are often fascinated with the myriad possibilities for escaping from yards and catching small animals, figuring out on their own numerous and often ingenious ways of doing both.[1]

Assistance dogs are also required to be obedient at all times. This means they must learn a tremendous number of commands, understand how to act in a large variety of situations, and recognize threats to their human companions, some of which they might never before have encountered.

Many owners of livestock guardian breeds believe that breeds such as Great Pyrenees or the Kuvasz are not easily trained because their independent nature prevents them from seeing the point of such commands as "sit" or "down". The Molosser breeds are said to be particularly sensitive to physical or vocal aggression and, as such, are generally thought to respond to positive reinforcement-based methods of training. Hounds, (such as Beagles, Bloodhounds, and Basset Hounds), rank in the bottom tier of "The Intelligence of Dogs" list, but probably suffer from a certain approach to intelligence assessment.[citation needed] These dogs are bred to have a tenacious tracking mentality, taking advantage of their acute sense of smell, and less ability in "problem solving," which is the central task of Working and Herding dogs. In addition, many dog "authorities" are unaware of the Scenthound's extraordinary ability to perceive and evaluate things other than odors. They can detect pheromones, among other things, and may have the ability to evaluate a human's or another dog's personality or disposition from as far away as 300 feet. This can be described as "conditional intelligence" where the animal is quick to learn some things, while appearing reluctant to learn others.[citation needed]

Various studies have attempted to rigorously classify intelligence of dogs. A recent example is animal psychologist Juliane Kaminski's paper in Science that demonstrated that Rico, a Border Collie, could learn over 200 words.[2] Rico could remember the names of several items for up to four weeks after its last exposure (Kaminski eliminated the Clever Hans effect using strict protocols). Rico was also able to interpret phrases such as "fetch the sock" in terms of its component words (rather than considering its utterance to be a single word). Rico could also give the sock to a specified person. In 2008, Betsy, also a Border Collie, was featured on the cover of National Geographic Magazine. Betsy's intelligence rivaled that of Rico's in that she knew over 340 words and was able to correlate an object with a photographic image of the object, despite having seen neither before.[3]

In his 1996 book Good Natured, ethologist Frans de Waal discusses an experiment on guilt and reprimands conducted on a female Siberian husky. The dog had the habit of shredding newspapers, and when her owner returned home to find the shredded papers and scold her she would act guilty. However, when the owner himself shredded the papers without the dog's knowledge, the dog "acted just as 'guilty' as when she herself had created the mess." De Waal concludes that the "guilt" displayed by dogs is not true guilt but rather the anticipation of the behavior of an angry superior in a given situation.[4]

A recent study in the journal PNAS concluded that dogs can feel complex emotions, like jealousy.[5]

Psychology research has shown that human faces are asymmetrical with the gaze instinctively moving to the right side of a face upon encountering other humans to obtain information about their emotions and state. Research at the University of Lincoln (2008) shows that dogs share this instinct when meeting a human being, and only when meeting a human being (i.e., not other animals or other dogs). As such they are the only non-primate species known to do so.[6][7]

School psychologist Kathy Coon developed the first intelligence test for dogs in 1976 , with the work continuously revised through 2003. Assessments were developed to test short term memory, agility, ability to adapt, problem solving, unique detour problems, and to see how the dog reacts to conditions which he or she finds unacceptable. The performance of individual dogs was compared to over 100 dogs on which the test was standardized. Additional breed norms were developed in her book, The Dog Intelligence Test.[8]

Stanley Coren ranked dog breeds by intelligence in his book The Intelligence of Dogs based on surveys done of dog trainers, the article for which contains a summary of the rankings obtained.