(born October 31, 1922) was the King of Cambodia from 1941 to 1955 and again from 1993 until his semi-retirement and voluntary abdication on 7 October 2004 in favor of his son, the current King Norodom Sihamoni. Since his abdication, he has been known as The King-Father of Cambodia (Khmer: Preahmâhaviraksat), a position in which he retains many of his former responsibilities as constitutional monarch.

The son of King Norodom Suramarit and Queen Sisowath Kossamak, Sihanouk has held so many positions since 1941 that the Guinness Book of World Records identifies him as the politician who has served the world's greatest variety of political offices.[1] These included two terms as King, two as Sovereign Prince, one as president, two as prime minister, and one as Cambodia's non-titled head of state, as well as numerous positions as leader of various governments-in-exile.

Most of these positions were only honorific, including the last position as constitutional King of Cambodia. Sihanouk's actual period of effective rule over Cambodia was from 9 November 1953, when France granted independence to Cambodia, until 18 March 1970, when Lon Nol and the National Assembly deposed Sihanouk.

The literal translation of the title :

Despite the great ritualism surrounding the Cambodian monarchy, Sihanouk has always maintained close relations with the Cambodian people, and when addressing him, or talking about him, they most often call him

Sihanouk received his primary education in a Phnom Penh primary school. He pursued his secondary education in Saigon (now Ho Chi Minh City), Vietnam at "Lycée Chasseloup Laubat" until his coronation and then later attended Cavalry military school in Saumur, France. When his maternal grandfather, King Sisowath Monivong, died on April 23, 1941, the Crown Council selected Prince Sihanouk as King of Cambodia. At that time, colonial Cambodia was part of French Indochina. His coronation took place on September 1941. In March 1945, the Empire of Japan deposed the French colonial administration and took control of French Indochina. Under pressure from the Japanese, Sihanouk proclaimed Cambodia's independence. Unlike the Vietnamese Emperor Bảo Đại, Sihanouk was careful not to compromise himself too much in collaboration with Japan. The Japanese imposed Son Ngoc Thanh as foreign minister then, in August, as prime minister of Cambodia.[2] After Japan's surrender, the French gradually retook control of French Indochina: Son Ngoc Thanh was arrested in October 1945, while Sihanouk, considered by the French a valuable ally in the chaotic Indochinese situation, retained his throne.

After World War II and into the early 1950s, King Sihanouk's aspirations became much more nationalistic and he began demanding independence from the French colonists and their complete departure from Indochina. This echoed the sentiments of the other fledgling nations of French Indochina: the State of Vietnam, the Democratic Republic of Vietnam, and the Kingdom of Laos. He went into exile in Thailand in May 1953 because of threats on his life by the French and only returned when independence was granted on 9 November 1953. Whilst independent, Cambodia retained an alliance with the French Union, until the end of the First Indochina War and the subsequent official end of French Indochina. On 2 March 1955, Sihanouk abdicated in favor of his father, established the Sangkum and took the post of Prime Minister a few months later, after having obtained an overwhelming victory in the parliamentary elections on September 1955.

On August 31, 1959, Ngo Dinh Nhu, the younger brother and chief adviser of South Vietnamese president Ngo Dinh Diem, failed in an attempt to assassinate Sihanouk. He ordered his agents to send parcel bombs to the Cambodian leader. Two suitcases were delivered to the Sihanouk's palace, one addressed to the head of state, and the other to Prince Vakrivan, his head of protocol. The deliveries were labelled as originating from an American engineer who had previously worked in Cambodia and purported to contain gifts from Hong Kong. Sihanouk's package contained a bomb, but the other did not; however, Vakrivan opened both on behalf of the monarch and was killed instantly, as was a servant. The explosion happened adjacent to a room in the palace where Sihanouk's parents were present.[3][4]

Following his father's death in 1960, Sihanouk won general election as head of state, but received the title of Prince rather than King. In 1963, he made a change in the constitution that made him head of state for life. While he was not officially King, he had created a constitutional office for himself that was exactly equal to that of the former Kingship.

When the Vietnam War raged, Sihanouk promoted policies that he claimed to preserve Cambodia's neutrality and most importantly security. While he in many cases sided with his neighbors, pressures upon his government from all sides in the conflict were immense, and his overriding concern was to prevent Cambodia from being drawn into a wider regional war. In so doing he made difficult choices of alliances in pursuit of the least dangerous course of action, within a political environment where genuine neutrality was likely impossible at the time. In the spring of 1965, he made a pact with the People's Republic of China and North Vietnam to allow the presence of permanent North Vietnamese bases in eastern Cambodia and to allow military supplies from China to reach Vietnam by Cambodian ports. Cambodia and Cambodian individuals were compensated by Chinese purchases of the Cambodian rice crop by China at inflated prices. He also at this time made many speeches calling the triumph of Communism in Southeast Asia inevitable and suggesting Maoist ideas were worthy of emulation. In 1966 and 1967, Sihanouk unleashed a wave of political repression that drove many on the left out of mainstream politics. His policy of friendship with China collapsed due to the extreme attitudes in China at the peak of the Cultural Revolution. The combination of political repression and problems with China made his balancing act impossible to sustain. He had alienated the left, allowed the North Vietnamese to establish bases within Cambodia and staked everything on China's good will. On 11 March 1967, a revolt in Battambang Province led to the Cambodian Civil War.

On March 18, 1970, while Sihanouk was out of the country travelling, Prime Minister Lon Nol convened the National Assembly which voted to depose Sihanouk as head of state and gave Lon Nol Emergency powers. Prince Sisowath Sirik Matak, Sihanouk's cousin who had been passed over by the French government in 1941, retained his post as Deputy Prime Minister. The new Khmer Republic was immediately recognized by the United States.

After he was deposed, Sihanouk fled to Beijing, formed the National United Front of Kampuchea (Front Uni National du Kampuchéa - FUNK) and began to support the Khmer Rouge in their struggle to overthrow the Lon Nol government in Phnom Penh. He initiated the Gouvernement Royal d'Union Nationale du Kampuchéa (Royal Government of the National Union of Kampuchea), which included Khmer Rouge leaders. After Sihanouk showed his support for the Khmer Rouge by visiting them in the field, their ranks swelled from 6,000 to 50,000 fighters. Many of the new recruits for the Khmer Rouge were apolitical peasants who fought in support of the King, not for communism, of which they had little understanding. King Sihanouk would later argue (1979) that the monarchy being abolished, he was only fighting for his country's independence, "even if [his] country had to be Communist."[5] During Lon Nol's regime, Sihanouk mostly lived in exile in North Korea, where a 60-room palatial residence which even had an indoor movie theater, was built for him. He would later return to his Pyongyang palace after the 1979 Vietnamese invasion.[6]

When the Khmer Republic fell to the Khmer Rouge in April 1975, Prince Sihanouk became the symbolic head of state of the new régime while Pol Pot remained in power. Sihanouk, who had imagined living like a retired country gentleman and perhaps being 'a public relations man for [his] country and have [...] jazz parties and do some filming'[7] was to spend the next few years virtually as a hostage of the Khmer Rouge. The next year, on April 4, 1976, the Khmer Rouge forced Sihanouk out of office again and into political retirement. During the Vietnamese invasion, he was sent to New York to speak against Vietnam before The United Nations. After his speech, he sought refuge in China and in North Korea.

In the late 1980s and early 1990s, Sihanouk's opposition forces drew limited military and financial support from the United States, which sought to assist his movement as part of the Reagan Doctrine effort to counter Soviet and Vietnamese involvement in Cambodia. One of the Reagan Doctrine's principal architects, the Heritage Foundation's Michael Johns, visited with Sihanouk's forces in Cambodia in 1987, and returned to Washington urging expanded U.S. support for the KPLNF and Sihanouk's resistance forces as a third alternative to both the Vietnamese-installed and supported Cambodian government and the Khmer Rouge, which also was resisting the government.[11]

Peace negotiations between the CGDK and the PRK commenced shortly thereafter and continued until 1991 when all sides agreed to a comprehensive settlement which they signed in Paris. Prince Sihanouk returned once more to Cambodia on 14 November 1991 after thirteen years in exile. 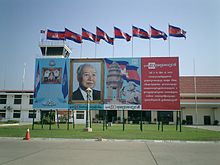 In 1993, Sihanouk once again became King of Cambodia. During the restoration, however, he suffered from ill health and traveled repeatedly to Beijing for medical treatment.

Sihanouk's leisure interests include music (he has composed songs in Khmer, French, and English) and film. He has become a prodigious filmmaker over the years, directing many movies and orchestrating musical compositions. He became one of the first heads of state in the region to have a personal website, which has proven a cult hit. It draws more than a thousand visitors a day, which constitutes a substantial portion of his nation's Internet users. Royal statements are posted there daily.

Sihanouk went into self-imposed exile in January 2004, taking up residence in Pyongyang, North Korea[12] and later in Beijing, People's Republic of China. Citing reasons of ill health, he announced his abdication of The Throne on October 7, 2004. Sihanouk was diagnosed with B-Cell Lymphoma in his prostate in 1993; the disease recurred in his stomach in 2005, and a new cancer was found in December 2008. Sihanouk also suffers from diabetes and hypertension.[13]

The constitution of Cambodia has no provision for an abdication. Chea Sim, the President of the Senate, assumed the title of acting Head of State (a title he has held many times before), until the Throne Council met on October 14 and appointed H.R.H. Prince Norodom Sihamoni, one of Sihanouk's sons, as the new King.

Sihanouk reportedly has had several wives and concubines, producing at least fourteen children in a period of eleven years. According to Time (June 30, 1956), however, his only legal wives have been Princess Samdech Norleak (married 1955) and Paule Monique Izzi (married 1955), who is a step-granddaughter of HRH Prince Norodom Duongchak of Cambodia and the younger daughter of Pomme Peang and her second husband, Jean-François Izzi, a banker. A profile of Sihanouk in The New York Times (June 4, 1993, page A8) stated that the King met Monique Izzi in 1951, when he awarded her a prize in a beauty pageant.

According to Royal Ark's genealogy of the Cambodian Royal Family, however, Sihanouk has been married seven times, his consorts being:[14]