Route 59, at 0.15-mile (0.24 km) long, is the shortest state highway in New Jersey, United States. The route consists entirely of a short block of Lincoln Avenue from New Jersey Route 28 (known locally as North Avenue) in Cranford to Union County Route 610 (known locally as South Avenue). The route crosses under the Raritan Valley Line of New Jersey Transit about halfway down the block, which runs along the community border. Route 59 was originally a proposed alignment of Route 22, which was supposed to head from an intersection with current day New Jersey Route 159 in Morris County at the Pine Brook Bridge before heading through several counties, terminating at an intersection with New Jersey Route 27 in Rahway. Most of the route was not constructed, and a portion in Garwood and Cranford was re-designated Route 59 in the 1953 New Jersey state highway renumbering on January 1, 1953. 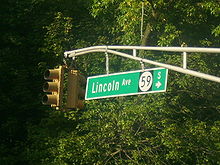 Route 59 begins at a four-way intersection with Union County Route 610 (South Avenue) in the community of the Garwood. Route 59 heads northwestward, passing a couple of local businesses in both directions. The route crosses under the New Jersey Transit-owned Raritan Valley Line and into the community of Cranford. The route continues to the northwest, passing several local businesses before ending at a T-intersection with New Jersey Route 28 (North Avenue). The right-of-way ends at this intersection heading northbound.[2]

The entire route is in Union County.