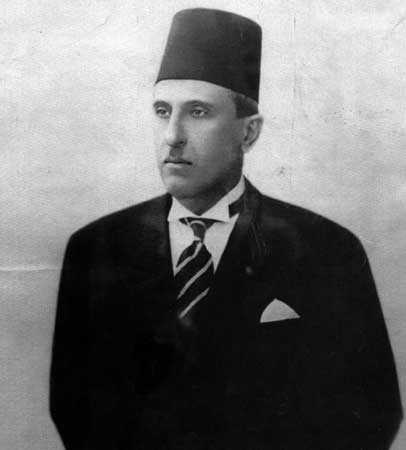 Quwatli entered Syrian politics in the 1930s as a member of the National Bloc, a coalition of Arab parties that led the opposition to French rule. As a young man, he had been involved in al-Fatat, an underground opposition group in Ottoman Syria, and been arrested for his activities in 1916. In jail, because of harsh torture, he feared that he would tell the names of his comrades in al-Fatat. To avoid the he slit open his wrist in a suicide attempt but was saved at the last minute by his friend and colleague Dr Ahmad Qadri. He was released when ended to become a civil servant in post-Ottoman era of King Faisal I. When the French Mandate was proclaimed in July 1920, the French sentenced Quwatli to death. He fled to , then , and co-established the Syrian-Palestinian Congress in exile, with a group of other exiled nationalists from Syria, Lebanon, and Palestine. He returned in 1924, and participated in the Syrian Revolt of 1925-27, although he quickly fell out with the Revolt's main protagonist, the leader because of the latter's pro- policies. Quwatli was exiled once again in 1927, only to return under a general amnesty in 1932. An associate and protégé of , the republic's first president, Quwatli gradually rose in the ranks of the National Bloc.

After Atassi resigned the presidency in 1939 over objections to continued French intervention in Syria, several years of (WWII-related) instability and direct French and British military ruled followed. The National Bloc remained the dominant expression of Syrian nationalism, and, when elections were again held in 1943, the bloc helped elect Quwatli president. His major preoccupation was to conclude a treaty with France, which had exercised control over Syria for more than two decades. This was accomplished with British help, and by 1946 all foreign troops had evacuated. In 1947 Quwatli enacted an amendment that removed a one-term limit from the constitution, and he was reelected in 1948.

Because of the Israeli victory over Arab forces in 1948, as well as dissatisfaction with Quwatli's rule, he was overthrown by a military coup in March 1949. After a short imprisonment, he went into exile in Egypt, waiting for an opportunity to regain his position, while a series of coups paralyzed Syrian political life. Free elections under the auspices of the venerable Hashim al-Atassi finally took place in 1955, and Quwatli, at the head of the National Party (the successor to the National Bloc), was elected president. By then his post was largely ceremonial, however, and he had little influence on Syria's domestic politics thereafter. Towards the close of the decade, pan-Arab nationalism had swept Syria, and Quwatli presided over the union with Egypt, which formed the , headed by Egyptian president . By 1959 he had quarreled with Nasser, and was forced into exile once again. This marked the end of his political career. At his death in 1967, after the Syrian authorities initially almost refused to allow his body burial at home, he was interred in Damascus in a lavish state funeral which adequately reflected the ambitious posturing that marked the course of his life.

Quwatli's legacy was a mixed one, that of genuine nationalism and personal ambition. Critics point out that his tolerance for the corruption of some of his associates helped keep him in power. In marked contrast to his mentor, Hashim al-Atassi, he was perpetually seeking power, while Atassi accepted it reluctantly, and was quick to relinquish it whenever the presidency came under the duress of foreign intervention or domestic military rule. Quwatli had no such qualms. Nevertheless, he was a successful politician, and is credited with presiding over the withdrawal of foreign troops, which put the finishing touches on full Syrian Independence.