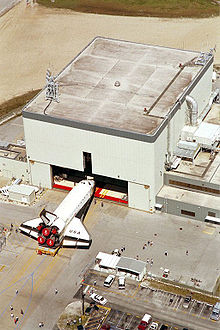 Space Shuttle Columbia at the entrance of an Orbiter Processing Facility

An Orbiter Processing Facility (OPF) was one of three hangars where U.S. space shuttle orbiters underwent maintenance between flights. All three such facilities, OPF-1, OPF-2 and OPF-3, were located at NASA's Kennedy Space Center in Florida at Launch Complex 39.

They were located west of the Vehicle Assembly Building, where the orbiter was mated with its External Tank and Solid Rocket Boosters before transport to the launch pad. OPF-1 and OPF-2 are connected with a low bay between them, while OPF-3 is across the street.

OPF-3 was previously called the Orbiter Maintenance & Refurbishment Facility (OMRF), but was upgraded to a fully functioning OPF.

Discovery inside OPF-3 following the completion of mission STS-114

When a shuttle mission was completed, the orbiter was towed from the Shuttle Landing Facility to its assigned OPF where it spent several months (typically less than 100 days) being prepared for the next mission. Any remaining payloads from the previous mission were removed and the vehicle was fully inspected, tested, and refurbished.[1]

Prior to rollout to the Vehicle Assembly Building, several weeks before scheduled launch, the orbiter was prepared for the next mission by installing mission flight kits, payloads, consumable fluids and gases where possible. Remaining payloads, fuels and fluids were installed on the pad closer to launch day. The last step before rollover to the VAB was weighing the orbiter to determine its center of gravity.[1]

OPF-1 is assigned to Discovery, OPF-2 to Atlantis. Endeavour is currently stored in the VAB. OPF-3 is under lease to Boeing for the manufacture and testing of their CST-100 spacecraft.[3]

This article incorporates public domain material from websites or documents of the National Aeronautics and Space Administration.