At various times during the 1950s, the 9Fs worked passenger trains with great success, indicating the versatility of the design, sometimes considered to represent the ultimate in British steam development. Several variants were constructed for experimentation purpose in an effort to reduce costs and maintenance, although these met with varying degrees of success.

The total number built was 251, production being shared between Swindon (53) and Crewe Works (198). The last of the class, 92220 Evening Star, was the final steam locomotive to be built by British Railways, in 1960. Withdrawals began in 1964, with the final locomotives removed from service in 1968. Several examples have survived into the preservation era in varying states of repair, including Evening Star.

The British Transport Commission had proposed that the existing steam locomotive fleet be replaced by both diesel and electric traction. However the board of British Railways, which wanted the railways to be completely electrified, ignored the BTC and ordered a new fleet of 'standard' steam locomotive designs as an interim motive power solution ahead of electrification.[3] Freight was well catered for in terms of locomotive availability after nationalisation in 1948, with a number of heavy freight locomotives built to aid the war effort forming part of British Railways' inheritance. This consisted of 666 LMS 8F class 2-8-0 and numerous Robert Riddles designed WD Austerity 2-8-0s and WD Austerity 2-10-0s.

It was the Eastern Region's Motive Power officer, L. P. Parker, who made the case for a new design of powerful freight locomotive, able to shift heavy loads at fast speeds in round trips between distant destinations within the eight-hour shift of the footplate crew.[4] Riddles took up the challenge, initially designing a 2-8-2 locomotive, but settled upon the 2-10-0 wheel arrangement for the increased traction and lower axle load that five coupled axles can provide. The resultant design became one of the most successful locomotive classes ever constructed in Britain.[4]

The 9F was designed at both Derby and Brighton Works in 1951 to operate freight trains of up to 900 tons (914 tonnes) at 35 mph (56 km/h) with maximum fuel efficiency.[3] The original proposal was for a boiler from the BR Standard Class 7 Britannia 4-6-2, adapting it to a 2-8-2 wheel arrangement,[5] but Riddles eventually settled upon a 2-10-0 type because it had been successfully utilised on some of his previous Austerity locomotives; distributing the adhesive weight over five axles gave a maximum axle load of only 15 tons, 10 cwt.[3] However, in order to clear the rear coupled wheels the grate had to be set higher, thus reducing firebox volume. There were many problems associated with locomotives of such a long wheelbase, but these were solved by the design team through a series of compromises. The driving wheels were 5 feet 0 inches (1.52 m) in diameter, and the centre driving wheels were without flanges, whilst those on the second and fourth coupled wheels were reduced in depth. This enabled the locomotive to round curves of a radius as small as 400 feet (120 m).[4] As on all other BR standard steam locomotives the leading wheels were 3 feet 0 inches (0.91 m) in diameter.[6]

Introduced in January 1954,[7] the class comprised 251 locomotives, of which 53 were constructed at Swindon Works, and 198 at Crewe Works. The locomotives were numbered 92000-92250.[4] The last member of the class was constructed at Swindon in 1960, the 999th "BR Standard" to be constructed, and the last steam locomotive to be built by British Railways. To mark the occasion, a competition was run within the Western Region of British Railways to choose an apt name, and the locomotive was given the name and number of 92220 Evening Star.[4] Many of the class lasted only a few years in service before withdrawal when steam traction ended on the mainline in Britain. Withdrawals of the class from everyday service began in May 1964, and had been completed by June 1968.

The 9F was used as a proving ground for a variety of technical innovations intended to provide improvements in efficiency, power or cost. 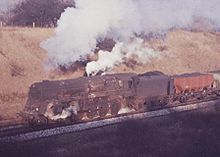 Ten locomotives (numbers 92020-92029) were built in 1955 with the Franco-Crosti boiler.[8][9] which incorporated a combustion gas feed water preheater that recuperated low-grade residual heat[10] In the 9F version, this took the form of a single cylindrical water drum running along the underside of the main boiler barrel. The standard chimney on top of the smokebox was only used during lighting up. In normal working the gases went through firetubes inside the preheater drum that led to a second smokebox situated beneath the boiler from which there emerged a chimney on the right-hand side, just forward of the firebox. In the event, the experiment did not deliver the hoped-for benefits, and efficiency was not increased sufficiently to justify the cost and complexity.[11][12] Moreover conditions were unpleasant on the footplate in a cross-wind, this in spite of the later provision of a small deflector plate forward of the chimney. These problems led to the subsequent removal of the preheater drum, although the locomotives did retain the original main smokebox with its distinctive look.

Locomotive numbers 92165-92167 were built with a mechanical stoker, which was a helical screw that conveyed coal from the tender to the firebox.[4] The stoker made higher steaming rates possible, and it was hoped that mechanical stoking might enable the burning of low-grade coal. It was relatively inefficient, and the locomotives used in this trial were rebuilt to the normal configuration.[4] Simply supplying more low grade coal than a fireman could do by hand did not provide efficient burning.

Number 92250 was equipped with a Giesl ejector in which the exhaust steam was divided between seven nozzles arranged in a row on the locomotive's longitudinal axis and directed into a narrow fan-shaped ejector that more intimately mixed it with the smokebox gases than is the case of an ordinary chimney.[4] This offered the same level of draught for a reduced level of exhaust back-pressure or, alternatively, increased draught with no performance loss elsewhere. Again, great claims were made as to the potential benefits, and 92250 retained the variant chimney until withdrawal, though no benefit was noticeable.[4]

The only modification which did deliver any noticeable benefit was the fitting of 92178 with a double blastpipe and chimney during its construction. Following delivery in September 1957, it was subjected to extensive testing, both in the Rugby test plant and on service trains. After the completion of the tests in February 1958, it was decided to fit all 9Fs built subsequently with double blastpipes and chimneys; these were numbers 92183 onwards, also 92165–7. The modification was also installed on 92000/1/2/5 and 92006.[13] This allowed the engines to steam slightly more freely and thus generate higher power ranges.[4]

The 9F turned out to be the best of the Standard classes, and one of the finest steam locomotive designs ever designed in Britain in terms of its capacity to haul heavy loads over long distances.[4] It was highly effective at its designed purpose, hauling heavy, fast freight trains, and was used all over the British railway network. This was exemplified when in September 1982, preserved engine 92203 Black Prince[14] set the record for the heaviest train ever hauled by a steam locomotive in Britain, when it started a 2,178-ton train at a Foster Yeoman quarry in Somerset, UK.[15]

The 9F also proved its worth as a passenger locomotive, adept at fast running despite its small driving wheels, and for a time was a frequent sight on the Somerset and Dorset Railway,[4] where its power and high proportion of adhesive weight were well suited to coping with the 1 in 50 ruling gradient on the Bath extension. On one occasion, a 9F was set to haul an express passenger train, in place of the normal LNER "Pacific", from Grantham to King's Cross. An enthusiast aboard the train timed the run and noted that twice the speed exceeded 90 mph. The driver was afterwards told that he was only supposed to keep time, "not break the bloody sound barrier!" He replied that the engine had no speedometer, and that it ran so smoothly at high speeds that he just let it run as fast as felt safe. Nor was this the only instance of 9Fs reaching high speeds. However, concerns that the high rotational speeds involved in fast running could cause excessive wear and tear to the plain-bearing running gear prompted the British Railways management to stop the utilisation of 9Fs on express passenger trains [16]

The class were painted British Railways Freight Black without lining. The British Railways crest was located on the tender side. Given the British Railways power classification 9F, the locomotives were numbered in the 92xxx series, between 92000 and 92250.[1] Because of its status as the last locomotive constructed at Swindon 92220 Evening Star was turned out in British Railways Brunswick Green livery, which was usually reserved for express passenger locomotives.[1] Several locomotives allocated to the Western Region, including no. 92220, bore a blue spot on the cab side below the number, to denote the axle loading under the former GWR's system of weight classification.[17] 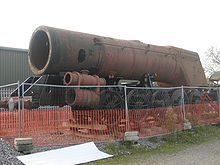 92207 under restoration at Shillingstone, having had £100,000 spent on it already between 1986 and 2007
Main article: List of preserved BR Standard Class 9F locomotives

Nine 9F locomotives survived withdrawal from mainline service, with Evening Star as part of the National Collection, and eight others preserved either through direct purchase from BR, or through Woodham Brothers Scrapyard in Barry, South Wales. Several have since been restored to full working order.

An example of this type of locomotive can be seen on the Thomas and Friends TV Series, in the form of the character Murdoch, introduced in 2003.

The erstwhile Kitmaster company produced an unpowered polystyrene injection moulded model kit for 00 gauge. In late 1962, the Kitmaster brand was sold by its parent company (Rosebud Dolls) to Airfix, who transferred the moulding tools to their own factory; they re-introduced some of the former Kitmaster range, including the BR Standard 9F class locomotive. In time, the moulding tools passed on to Dapol who have also produced the model kit.[18] During the 1960s a cast white metal chassis kit in the Simplas range to motorise the model was made available by Wilro Models of Clarence Road, Hackney, London.

In late 1971, Tri-ang Hornby introduced a 00 gauge Ready to Run model of this locomotive; it continued to be produced after the rebranding as Hornby Railways.[19]

Currently both Hornby and Bachmann produce models of this class, with the cheaper less detailed Hornby version being part of the budget "Railroad" range. Hornby also announced in their Christmas 2010 press release that a model of the Thomas and Friends character Murdoch is planned for release in 2011.

The last design by model engineer Curly Lawrence ("LBSC") was for a live steam 3½ inch gauge model BR 9F Locomotive. The design was unfinished before his death on 4 November 1967. The design was subsequently completed by Martin Evans.