Communication with submarines is difficult because radio waves do not travel well through thick electrical conductors like salt water.

The obvious solution is to surface and raise an antenna above the water, then use ordinary radio transmissions. Early submarines had to frequently surface anyway for the oxygen needed by their diesel engines. During the Cold War, however, nuclear-powered submarines were developed that could stay submerged for months. In order to allow for communication with submerged submarines, several techniques are used.

Sound travels far in water, and underwater loudspeakers and hydrophones can cover quite a gap. Apparently, both the American (SOSUS) and the Russian Navy have placed sonic communication equipment in the seabed of areas frequently traveled by their submarines and connected it by underwater communications cables to their land stations. If a submarine hides near such a device, it can stay in contact with its headquarters. An underwater telephone sometimes called Gertrude is also used to communicate with submersibles. 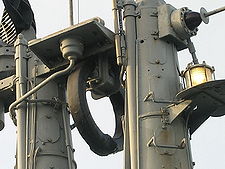 The VLF antenna of a World War II submarine

VLF radio waves (3–30 kHz) can penetrate seawater to a depth of approximately 20 meters. Hence a submarine at shallow depth can use these frequencies. A vessel more deeply submerged might use a buoy on a long cable equipped with an antenna. The buoy rises to a few meters below the surface, and may be small enough to remain undetected by enemy sonar / radar.[citation needed]

Due to the low frequency, a VLF broadcast antenna needs to be quite big. In fact, broadcasting sites are usually a few square kilometers (or miles). This of course prevents such antennas being installed on submarines. Submarines only carry a VLF reception aerial, and do not respond on such low frequencies. So a ground-to-submarine VLF broadcast is always a one way broadcast, originating on the ground and received aboard the boat. If two-way communication is needed, the boat must surface and communicate on other, higher, frequencies (such as UHF or VHF).

This band allows for a roughly 300 bit/s transmission - or about 35 8-bit ASCII characters per second (or the equivalent of a sentence every two seconds) - a total of 450 words per minute. Simply shifting to 7-bit ASCII results in a baud rate (characters per second) increase of 14%. An additional shift to a 6-bit or a 5-bit code (such as the baudot code) would result in speeds of more than 600 and 700 words per minute. 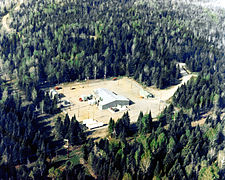 Electromagnetic waves in the ELF frequency range (3–30 Hz) (see also SLF) can travel through the oceans and reach submarines anywhere. Building an ELF transmitter is a formidable challenge, as they have to work at incredibly long wavelengths: The US Navy's system (called Seafarer) operated at 76 hertz,[1] the Soviet/Russian system (called ZEVS) at 82 hertz.[2] The latter corresponds to a wavelength of 3658.5 kilometers. That is more than a quarter of the Earth's diameter. Obviously, the usual half-wavelength dipole antenna cannot be constructed, as it would spread across a large country.

Instead, one has to find an area with very low ground conductivity (a requirement opposite to usual radio transmitter sites), bury two huge electrodes in the ground at different sites, and then feed lines to them from a station in the middle, in the form of wires on poles. Although other separations are possible, 60 kilometers is the distance used by the ZEVS transmitter located near Murmansk. As the ground conductivity is poor, the current between the electrodes will penetrate deep into the Earth, essentially using a large part of the globe as an antenna. The antenna length in Republic, Michigan was approximately 52 kilometers (32 mi). The antenna is very inefficient. To drive it, a dedicated power plant seems to be required, although the power emitted as radiation is only a few watts. Its transmission can be received virtually anywhere. A station in Antarctica at 78°S 167°W noticed when the Soviet Navy put their ZEVS antenna into operation.[2]

Due to the technical difficulty of building an ELF transmitter, only the USA and the Russian Navy owned such systems. Until it was dismantled in late September 2004, the American Seafarer, later called "Project ELF" system (76 Hz) consisted of two antennas, located at Clam Lake, Wisconsin (since 1977) and at Republic, Michigan in the Upper Peninsula (since 1980). Before 1977, the Sanguine system was used, placed in the Laurentian Shield in Wisconsin. The Russian antenna (ZEVS, 82 Hz) is installed at the Kola Peninsula near Murmansk. It was noticed in the West in the early 1990s. The British Royal Navy once considered building their own transmitter at Glengarry Forest, Scotland, but the project was canceled.

The coding used for US military ELF transmissions employed a 64-symbol Reed-Solomon error correction code, meaning that the alphabet had 64 symbols, each represented by a very long pseudo-random sequence. The entire transmission was then encrypted. The advantages of such a technique are that by correlating multiple transmissions, a message could be completed even with very low signal-to-noise ratios, and because only a very few pseudo-random sequences represented actual message characters, there was a very high probability that if a message was successfully received, it was a valid message (anti-spoofing).

The communication link is one-way. No submarine could have its own ELF transmitter on board, due to the sheer size of such a device. Attempts to design a transmitter which can be immersed in the sea or flown on an aircraft were soon abandoned.

Due to the limited bandwidth, information can only be transmitted very slowly, on the order of a few characters per minute (see Shannon's coding theorem). Thus it is reasonable to assume that the actual messages were mostly generic instructions or requests to establish a different form of two-way communication with the relevant authority.

A surfaced submarine can use ordinary radio communications. Submarines may use naval HF, VHF and UHF voice and teleprinter circuits. Where available, dedicated military communications satellite systems are preferred for long distance communications, as HF may betray the location of the submarine. The US Navy's system is called Submarine Satellite Information Exchange Sub-System (SSIXS), a component of the Navy Ultra High Frequency Satellite Communications System (UHF SATCOM).