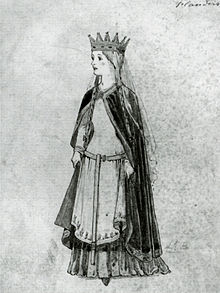 Matilda of Flanders (French: Mathilde de Flandre; Dutch: Mathilda van Vlaanderen) (c. 1031 – 2 November 1083) was the wife of William the Conqueror and, as such, Queen consort of the Kingdom of England. She bore William nine/ten children, including two kings, William II and Henry I.

Matilda, or Maud, was the daughter of Baldwin V, Count of Flanders and Adèle of France, herself daughter of Robert II of France. According to legend, when Duke William II of Normandy (later known as William the Conqueror) sent his representative to ask for Matilda's hand in marriage, she told the representative that she was far too high-born, to consider marrying a bastard. After hearing this response, William rode from Normandy to Bruges, found Matilda on her way to church, and dragged her off her horse by her long braids, threw her down in the street in front of her flabbergasted attendants, and rode off. Another version of the story states that William rode to Matilda's father's house in Lille, threw her to the ground in her room (again, by the braids), and hit her (or violently battered her) before leaving. Naturally, Baldwin took offense at this but, before they drew swords, Matilda settled the matter[1] by agreeing to marry him, and even a papal ban on the grounds of consanguinity did not dissuade her. They were married in 1053.

There were rumors that Matilda had been in love with the English ambassador to Flanders, a Saxon named Brihtric, who declined her advances. Whatever the truth of the matter, years later when she was acting as Regent for William in England, she used her authority to confiscate Brihtric's lands and throw him into prison, where he died.

When William was preparing to invade England, Matilda outfitted a ship, the Mora, out of her own money and gave it to him. This indicated that she must have owned rich lands in Normandy to be able to do so. Even after William conquered England and became its king, it took her more than a year to visit her new kingdom.[2] Even after she had been crowned queen, she would spend most of her time in Normandy and sponsor ecclestial houses there.

Matilda was crowned queen in 1068 in Westminster, in a ceremony presided over by the archbishop of York. During the ceremony she was said to be sharing in power with her husband and the people were said to be fortunate to be ruled by the ability and wisdom of the queen.[3]

For many years it was thought that she had some involvement in the creation of the Bayeux Tapestry (commonly called La Tapisserie de la Reine Mathilde in French), but historians no longer believe that; it seems to have been commissioned by William's half-brother Odo, Bishop of Bayeux, and made by English artists in Kent.[citation needed]

Matilda bore William eleven children, and he was believed to have been faithful to her, at least up until the time their son Robert rebelled against his father and Matilda sided with Robert against William.

She stood as godmother for Matilda of Scotland, who would become Queen of England after marrying Matilda's son Henry I. During the christening, the baby pulled Queen Matilda's headress down on top of herself, which was seen as an omen that the younger Matilda would be queen some day as well.[4]

After she died, in 1083 at the age of 51, William became tyrannical, and people blamed it on his having lost her.

Contrary to the belief that she was buried at St. Stephen's, also called l'Abbaye-aux-Hommes in Caen, Normandy, where William was eventually buried, she is intombed at l'Abbaye aux Dames, which is the Sainte-Trinité church, also in Caen. Of particular interest is the 11th century slab, a sleek black stone decorated with her epitaph, marking her grave at the rear of the church. It is of special note since the grave marker for William was replaced as recently as the beginning of the 19th century.

Reputed to be 4'2" (127 cm) tall, Matilda was England's smallest queen, according to the Guinness Book of Records. However, in 1819 and 1959 Matilda's incomplete skeleton was examined in France, and her bones were measured to determine her height. The 1819 estimate was under five feet, while the 1959 estimate was 5' (152 cm) tall. A reputed height of 4' 2" (127 cm) appeared at some point after 1959 in the non-scientific literature, misrepresenting the 1959 measurement.[5]

Some doubt exists over how many daughters there were. This list includes some entries which are obscure.

Gundred (c. 1063–1085), wife of William de Warenne (c. 1055–1088), was formerly thought of as being yet another of Matilda's daughters, with speculation that she was William I's full daughter, a stepdaughter, or even a foundling or adopted daughter. However, this connection to William I has now been firmly debunked.

Matilda was a seventh generation direct descendent of Alfred the Great. Her marriage to William strengthened his claim to the throne. All sovereigns of England, Great Britain and the United Kingdom have been descended from her, as is the present Queen Elizabeth II.

Her love for her husband is referenced in the Award-winning play, Angels in America.

On screen, Matilda has been portrayed by Jane Wenham in the two-part BBC TV play Conquest (1966), part of the series Theatre 625, by Anna Calder-Marshall in the TV drama Blood Royal: William the Conqueror (1990), and by Martha Howe Douglas on the popular comedy sketch show Horrible Histories