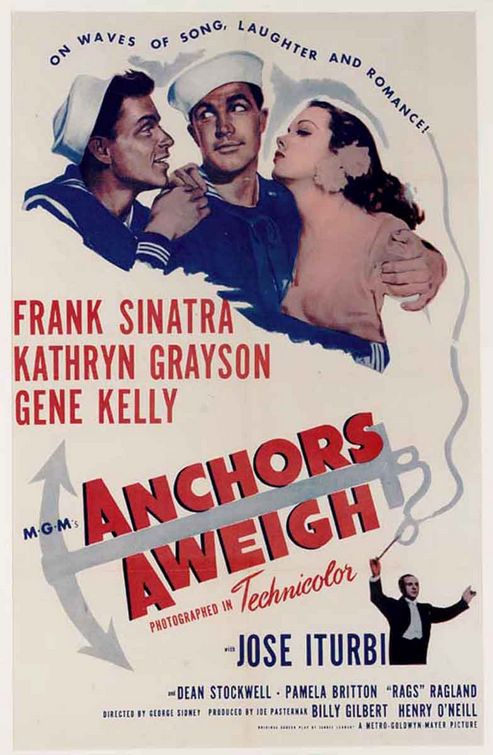 "Anchors Aweigh" is a 1945 film, directed by in which two sailors go on a four-day shore leave in Hollywood, accompanied by music and song, meet an aspiring young singer and try to help her get an audition at MGM. It stars , , , and .

The movie was written by and and directed by .

It won the Academy Award for Best Music, Scoring of a Musical Picture. In 2001, purchased this Oscar statuette at a auction and returned it to the . "Anchors Aweigh" was also nominated for Best Actor in a Leading Role (Gene Kelly), Best Cinematography, Color (, ), Best Music, Song (for (music) and (lyrics) for "I Fall in Love Too Easily") and Best Picture.

The movie is famous for a musical number where Gene Kelly dances with (voiced by ). Kelly is live action while Jerry is animated. appears briefly in the sequence as a butler. Originally, the producers wanted to use for this segment. agreed, but cut the deal. According to ' book on Roy Disney, the studio was in debt after and they were focusing on trying to get their own films out on time. According to Roy, they had no business making cartoons for other people. [Bob Thomas. "Building a Company: Roy O. Disney and the Creation of an Entertainment Empire."]

The film offers rare glimpses of the MGM studio, including the Thalberg Building, the backlot, the commissary, and one of the soundstages, as well as an on-screen performance by the studio orchestra. There is also a memorable scene at the , where Sinatra sings "I Fall in Love Too Easily", after Iturbi and a group of young pianists have performed a spectacular arrangement of 's "". In the audition scene with Iturbi, Grayson sings a special arrangement for soprano and orchestra of the waltz from 's "". Many of the memorable scenes in this film were later featured in the "" tributes to MGM.

* was inspired by the scene of Kelly dancing with Jerry to create the video for her song "", where she dances with an animated cat.
* In the "" episode "", the character dances with Kelly in an attempt to rent an helicopter. To do so, the animators edited Jerry Mouse and replaced him with Stewie, although Jerry's reflection is clearly seen below Stewie.