The first verse and refrain, as often sung today, run thus::"Yankee Doodle went to town,":"A-Riding on a pony;":"He stuck a feather in his cap,":"And called it macaroni."

The begins and ends all broadcasts with the of "Yankee Doodle".

The song's origins were in a pre-Revolutionary War song originally by British military officers to mock the disheveled, disorganized colonial "s" with whom they served in the . The word "" first appeared in the early seventeenth century to mean a fool or simpleton, and is thought to derive from the Low German "dudel" or "dödel", meaning "fool" or "simpleton". It is believed that the tune comes from the "". The mention of 'Macaroni' is a reference to an over the top sense of fashion and the men who took part in it, whom were often referred to as the "". One version of the Yankee Doodle lyrics is attributed to Doctor Richard Shuckburgh, a surgeon, who wrote the song after witnessing the unprofessional appearance of Colonel Thomas Fitch, Jr., the son of Connecticut Governor Thomas Fitch, who arrived in Albany in 1755 with the Connecticut militia.

The Boston "Journal of the Times" wrote about a British band declaring "that "Yankee Doodle" song was the Capital Piece of their band music."

The earliest known version of the lyrics comes from or 1758, as the date of origin is disputed ("Yankee Doodle Turns 250—Maybe", Associated Press, 4 July 2008)::"Brother Ephraim sold his Cow :"And bought him a Commission; :"And then he went to Canada :"To fight for the Nation;

:"But when Ephraim he came home :"He proved an arrant Coward, :"He wouldn't fight the Frenchmen there :"For fear of being devour'd."(Note that the sheet music which accompanies these lyrics reads, "The Words to be Sung through the Nose, & in the West Country drawl & dialect.")

The Ephraim referenced here was , a popularly known Colonel in the militia who was killed in the . He left his land and property to the founding of a school in Western Massachusetts, now known as .

The tune also appeared in 1762, in one of America's first comic operas, "", with bawdy lyrics about the search for Blackbeard's buried treasure by a team from Philadelphia. [Bobrick, 148]

It has been reported that the British often marched to a version believed to be about a man named , of . Ditson was tarred and feathered for attempting to buy a musket in Boston in March 1775, although he later fought at Concord:

:"Yankee Doodle came to town,:"For to buy a firelock,:"We will tar and feather him,:"And so we will .

For this reason, the town of Billerica claims to be the "home" of Yankee Doodle [ [http://www.bcmm.org/yankee_doodle.htm The Billerica Colonial Minute Men] ; "The Thomas Ditson story"; retrieved on July 10, 2008] , and claims that at this point the Americans embraced the song and made it their own, turning it back on those who had used it to mock them. After the , a Boston newspaper reported: "Upon their return to Boston [pursued by the Minutemen] , one [Briton] asked his brother officer how he liked the tune now, — 'Dang them,' returned he, 'they made us dance it till we were tired' — since which Yankee Doodle sounds less sweet to their ears."

The British responded with another set of lyrics following the ::"The seventeen of June, at Break of Day, :"The Rebels they supriz'd us, :"With their strong Works, which they'd thrown up, :"To burn the Town and drive us."

Also on February 6, 1788. Massachusetts ratified the Constitution by a vote of 186 to 168. To the ringing of bells and the booming of cannons, the delegates trooped out of Brattle Street Church. Before many days had passed, the citizens sang their convention song to the tune of "Yankee Doodle." Here are the lyrics to their song...

:"Fath'r and I went down to camp,:"Along with Cap'n Goodin', :"And there we saw the men and boys :"As thick as hasty puddin'.

:"And there we saw a thousand men :"As rich as Squire David, :"And what they wasted every day, :"I wish it could be saved.

:"The 'lasses they eat it every day, :"Would keep a house a winter; :"They have so much, that I'll be bound,:"They eat it when they've mind ter.

:"And there I see a swamping gun :"Large as a log of maple, :"Upon a deuced little cart,:"A load for father's cattle.

:"And every time they shoot it off, :"It takes a horn of powder, :"and makes a noise like father's gun, :"Only a nation louder.

:"I went as nigh to one myself:"As 'Siah's inderpinning;:"And father went as nigh again,:"I thought the deuce was in him.

:"Cousin Simon grew so bold,:"I thought he would have cocked it;:"It scared me so I shrinked it off:"And hung by father's pocket.

:"And Cap'n Davis had a gun, :"He kind of clapt his hand on't:"And stuck a crooked stabbing iron:"Upon the little end on't

:"And there I see a pumpkin shell:"As big as mother's bason,:"And every time they touched it off:"They scampered like the nation.

:"I see a little barrel too, :"The heads were made of leather;:"They knocked on it with little clubs:"And called the folks together.

:"And there was Cap'n Washington,:"And gentle folks about him;:"They say he's grown so 'tarnal proud:"He will not ride without em'.

:"He got him on his meeting clothes,:"Upon a slapping stallion;:"He sat the world along in rows,:"In hundreds and in millions.

:"The flaming ribbons in his hat,:"They looked so tearing fine, ah,:"I wanted dreadfully to get:"To give to my Jemima.

:"I see another snarl of men:"A digging graves they told me,:"So 'tarnal long, so 'tarnal deep,:"They 'tended they should hold me.

:"It scared me so, I hooked it off, :"Nor stopped, as I remember,:"Nor turned about till I got home,:"Locked up in mother's chamber.

During the , Southerners added some new lines of their own:

:Yankee Doodle had a mind :To whip the Southern rebels, :Because they did not choose to live :On codfish from his tables.

Also popular in the South was a further customized version called "":

During the Civil War, the Democratic party of 1864 adopted this version of the song as its anthem.

:Yankee Doodle is no more,:Sunk his name and station;:Nigger Doodle takes his place,:And favors amalgamation.

:CHORUS: Nigger Doodle's all the go,:Ebony shins and bandy,:"Loyal" people all must bow:To Nigger Doodle Dandy.

:The white breed is under par:It lacks the rich a-romy,:Give us something black as tar,:Give us "Old Dahomey."

:Blubber lips are killing sweet,:And kinky heads are splendid;:And oh, it makes such bully feet:To have the heels extended.

Many other variations and parodies have since arisen, including the one taught to schoolchildren today:

:Yankee Doodle went to town:A-riding on a pony:He stuck a feather in his hat:And called it macaroni

:Yankee Doodle went to town:A-riding on a pony:He stuck a feather in his hat:And called it macaroni

Some believe that these were alternative lyrics used by the British army during the revolutionary war. A "macaroni", in mid-18th-century , was a fashionable person; the joke being that the Yankees believed that a feather in the hat was sufficient to make them the height of fashion. Whether or not these were alternative lyrics sung in the British army, they were enthusiastically taken up by the Yanks themselves.

In the 1930s jazz vocalist sung her own parodical version of the song, which began:

:Yankee Doodle never went to town:I've just discovered the story was phony:Let me give you all the real low-down:He didn’t even own a pony

:Yankee Doodle went to London riding on a :Turned the corner just in time to see a lady's !

:Yankee Doodle went to town riding on a baby:He accidentally turned around and saw a naked lady 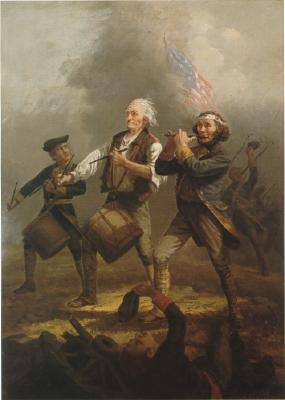 title=The Spirit of '76 (aka Yankee Doodle)
artist=Archibald MacNeal Willard
year=circa 1875
type=oil
height=61
width=45
museum=United States Department of State
* The Spirit of '76 (previously known as Yankee Doodle) is the most famous painting by
* A variation of the song appears in the 1904 musical "" by George M. Cohan.
* The song featured in a famous sequence in the 1942 film, "".
* The theme songs of the 1960s TV cartoon series "" and the children's TV show "" are sung to the tune of "Yankee Doodle". The kids on "Roger Ramjet" are named Yank, Doodle, Dan, and Dee.
* One sketch in a 1970s episode of "" features Kermit the Frog reporting on Don Music's attempt to "write" "Yankee Doodle", with both finding special trouble with the line "and called it macaroni".
* A 1990's commercial for the popular "" toy was released and was sung to the tune of "Yankee Doodle".
* In the musical "", the "Shivaree" concerning Ben Rumson's impending arranged marriage inspired a variation.
* In , a Disneyland attraction made for the , "Yankee Doodle" (with new lyrics) acts as a transition song between each scene with these lyrics, sung by a named Sam, voiced by .
* At the conclusion of the , in which American tennis star had defeated his long-time rival , TV commentator took note of the July 4th holiday and also McEnroe's red-white-and-blue attire, and quipped "Stick a feather in his cap and call him 'McEnroe-ni'!" [http://espn.go.com/classic/biography/s/McEnroe_John.html]
* In the 9th episode of season 2 of on " [http://www.handini.com Handini] " is shown playing the song on "The Hands".
* On episode with the song "Yankee Doodle," Alvin sings the last line as "and called it ."
* Ned Land, a character from the book , is said to have whistled the song.
* , a violinist-composer, wrote 'Souvenir D'Amerique "Yankee Doodle"', Variations Burlesques for Violin and Piano.
* Sung on "" on the episode "The Play's The Thing" in which Michelle tries out for the part of Yankee Doodle in her first grade play

Versions in other languages

The Bengali Version of Yankee Doodle was composed for the Film "Badshah" in the year 1964.The song was sang By Ranu Mukherjee, daughter of famous Bengali singer Hemanta Mukherjee.