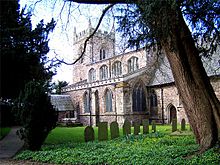 Cossington is a village within the Soar Valley in Leicestershire. It lies between Sileby, Rothley, Ratcliffe-on-the-Wreake and Syston.

Although there is no railway service to Cossington, the Ivanhoe Line runs along the Midland Main Line between Leicester and Loughborough. An hourly service is provided in both directions as part of East Midlands Trains Local service from Lincoln to leicester via Nottingham. Many years ago there was a 'Cossington Gate railway station' which has long since gone, the only evidence remaining on old maps, The nearest stations now being at Syston and Sileby.

Cossington was once home to Lady Isobel Barnett, a radio and television personality from the mid 20th century, where she committed suicide amidst shoplifting charges. A short new road, Barnett Close, has been named in her memory.

The village is home to three small businesses; two garden centres (Derry's Nursery and Goscote Nursery) and a public house, The Royal Oak. It has been open for business for about 10 years, following a fire of unknown cause, in which the only fatalities were a pair of chipmunks. This was particularly bad luck as there was a fire a few months earlier but this did not cause any extensive damage.

In the early 1990s, there were plans to expand the village, which were strongly opposed by the residents at the time, who formed the protest group Cossington In Distress. The residents were successful in protesting the cessation of the work and the village remains a peaceful community.

Every alternate Easter the residents of Cossington open their gardens to the public for two days for the 'Secret Gardens of Cossington' in which the village's better gardeners show off their talents, with all the proceeds of ticket sales going to charity. The event has been a massive success every time it has run.

Nearby is Ratcliffe College.