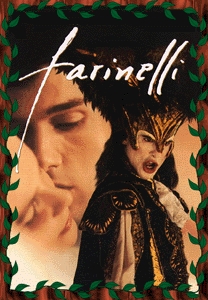 "Farinelli" is a film about the life and career of Italian singer , considered one of the greatest singers of all time. It stars as Farinelli and was directed by Belgian director .

Although Dionisi provided the speaking voice, Farinelli's singing voice was provided by a , and a , , who were recorded separately then digitally merged to recreate the sound of a .

Although based on real life events, some dramatic license is taken. For example, Farinelli's brother is given much importance and Porpora is de-emphasized, while the movie offers a different explanation for how came to take the stage name Farinelli. , played by , is made out to be somewhat of a villain, but this is based on the competition between the theater at which Handel's music was played and the theater at which Farinelli sang.

The film was directed by Belgian . Its musical director was the French harpsichordist and conductor .The musical recording was made at the concert hall "L'Arsenal" in Metz, with the orchestra .

It is rated R by the for depictions of adult themes and sexuality. It is available on Region 1 DVDs with a spoken track in French and Italian with a little English, and subtitles available in English and Spanish.

It was released in and won the for Best Foreign Film in . It was also nominated for an in the same category, but did not win.