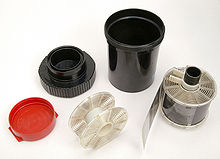 A film reel holds roll films in a spiral shape. The film is held evenly spaced so that the chemicals in the developing tank reach all of the film.

Developing tanks and film reels for roll films come in two varieties: plastic and stainless steel. With stainless steel reels, the film is clipped to the center and then gently pinched while the reel is turned so that the film falls into the reel's grooves. With a plastic reel, the film is loaded from the outside and then wound onto the reel by rotating the reel with a back-and-forth motion.

The user begins by opening the film canister (in the case of 35mm film) or separating the film from a paper backing (in the case of medium format film, e.g. 120/220 format). The film is then loaded onto a film reel in a completely dark environment; this can be a light-tight room or a changing bag. Care must be taken during this step, as improperly loading the film may result in parts of the film not getting developed. Once the film is on the reel it is put into the developing tank, and then a lid is placed on the developing tank. Because the lid prevents light from reaching the film, the rest of the film developing process may be carried out in daylight. In addition to protecting the film from light, the lid contains an opening for rapidly pouring liquids into and out of the developing tank. Finally, a separate cap seals the canister, which prevents the contents of the tank from spilling when agitated by inverting the tank.