Daniel Handler (born February 28, 1970) is an American author, screenwriter and accordionist. He is best known for his work under the pen name Lemony Snicket.

Handler was born in San Francisco, California, the son of Sandra Handler Day (née Walpole), an opera singer and retired City College of San Francisco Dean, and Lou Handler, an accountant.[1] His father was a Jewish refugee from Germany, and his mother is distantly related to British writer Hugh Walpole.[2][3] He has a younger sister, Rebecca Handler. He attended Commodore Sloat Elementary, Herbert Hoover Middle School and Lowell High School. Handler graduated from Wesleyan University in 1992. He is an alumnus of the San Francisco Boys Chorus.

Handler is married to Lisa Brown, a graphic artist whom he met in college. They have a son, Otto, born in 2003. They live in an old Victorian house in San Francisco.

Handler is politically active and helped form LitPAC. In the June 10, 2007 edition of The New York Times Magazine, Handler reveals ambivalence toward his wealth, and the expectations it creates. He states he is often asked for money for charitable causes and often gives. He has supported the Occupy Wall Street movement.[4] In an interview conducted by the 667 Dark Avenue fan site, Daniel Handler gave his personal philosophy as "Never refuse a breath mint".[5]

Although Handler has a partially Jewish background and considers C. S. Lewis to be an influence, he describes himself as a secular humanist.[6] In addition, he says, "I'm not a believer in predetermined fates, being rewarded for one's efforts. I'm not a believer in karma. The reason why I try to be a good person is because I think it's the right thing to do. If I commit fewer bad acts there will be fewer bad acts, maybe other people will join in committing fewer bad acts, and in time there will be fewer and fewer of them".[7]

Three of his novels have been published under his name. His first, The Basic Eight, was rejected by many publishers for its subject matter and tone (a dark view of a teenage girl's life). Handler claims that the novel was rejected thirty-seven times before finally being published. The book's tone served as an impetus of sorts for the Lemony Snicket works, A Series of Unfortunate Events.

Watch Your Mouth, his second novel, was actually completed before The Basic Eight was published. It follows a more operatic theme, complete with stage directions and various acts. Described by HarperCollins, the book's reprint publisher, as an "incest opera", it mixed Jewish mythology with modern sexuality. Watch Your Mouth's second half replaces the opera troupe with the form of a 12-step recovery, linguistically undergone by the protagonist.

His most recent effort under his own name is Adverbs, a series of short stories that he says are "about love". It was published in April 2006.

Handler has stated that his next adult novel is about pirates - or, more specifically, a modern-age pirate who "wants to be an old-fashioned kind of pirate".[8] 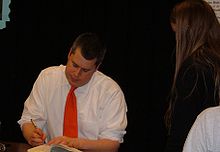 Handler began writing A Series of Unfortunate Events under the Snicket pseudonym in 1999. The books concern three orphaned children who experience progressively terrible events following the alleged death of their parents and burning of their home (done by a man named Count Olaf and his troupe of associates), and Snicket acts as the narrator and biographer of the fictional orphans. He has also narrated the audiobooks for three consecutive books in the series, before deciding to quit because he found it too difficult, handing back the narrating job to the original narrator, Tim Curry.

Handler has also appeared at author appearances as "Lemony Snicket's handler", as well as appearing as Snicket himself in various other books and media, including the commentary track for the film version of his books, Lemony Snicket's A Series of Unfortunate Events. He also wrote an introduction to Lemony Snicket: The Unauthorized Autobiography under his own name.

The Lemony Snicket books have been international best-sellers, and the 13th and final installment of the series came out Friday, October 13, 2006. On the day the thirteenth book came out, Handler appeared on the Today show as Lemony Snicket's representative.

Handler was in two bands following college, The Edith Head Trio and Tzamboni, but it wasn't until 69 Love Songs, a three-album set by The Magnetic Fields, that his music attracted attention. Handler played accordion on a number of tracks in 69 Love Songs. In the box set of the project, Handler provides a lengthy interview with band leader Stephin Merritt about the project, as well as conversations about each song. Handler also appears in the 2009 documentary Strange Powers, by Kerthy Fix and Gail O'Hara, about Merritt and the Magnetic Fields.

He has gone on to play accordion in several other Merritt projects, including music by The Magnetic Fields, The 6ths and The Gothic Archies, the last of which provided songs for the audiobooks in the A Series of Unfortunate Events children's book series. On October 10, 2006, an album by the Gothic Archies was released with all thirteen songs from the thirteen audiobooks in A Series of Unfortunate Events, along with two bonus songs.

In the audio commentary on the film adaptation Lemony Snicket's A Series of Unfortunate Events, Handler plays a song about how depressing it is to have leeches in a film.

Daniel Handler wrote the lyrics to the song "Radio", performed by One Ring Zero, and the lyrics to "The Gibbons Girl" by Chris Ewen's The Hidden Variable.

Handler was involved in the screenwriting process for the film Lemony Snicket's A Series of Unfortunate Events, but was ultimately removed from the project. He had completed eight separate drafts of the film before giving up following a change in those who were producing the film. Robert Gordon (screenwriter of Galaxy Quest) was hired to replace Handler and eventually received credit for the film's screenplay, under Handler's request.

Handler did submit a commentary track for the DVD version of Lemony Snicket's A Series of Unfortunate Events, alongside director Brad Silberling. In character as Lemony Snicket, he derides the Lemony Snicket in the film - played by Jude Law - as an impostor, as well as choosing to play accordion and sing about leeches rather than pay attention to the film. At numerous times during the track he shows great sympathy towards the Baudelaire children, and implies that he is being held captive by the director in order to do the commentary.

This is a partial list of works Handler has created or been involved with. For more information regarding his works as Lemony Snicket, see Lemony Snicket.

As editor or contributor: