D-Terminal
This article is about the video connector. For the item used in Digimon Adventure 02, see Digivice.

A D-Terminal or D-tanshi (Ｄ端子) is a type of analog video connector found on Japanese consumer electronics, typically HDTV, DVD, Blu-ray, D-VHS and HD DVD devices. It was developed by the EIAJ (Electronic Industry Association of Japan) in its standard, RC-5237, for use in digital satellite broadcast tuners. In appearance it is a small flat trapezic connector, the same connector as the AAUI connector used by Apple Computer for some time to connect to ethernet. 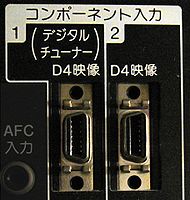 Two D-Video connectors (D4) on an HDTV. The much smaller D-Terminal should not be confused with the similarly-shaped but larger VGA connector.

A device with a D-Terminal connector supports that level and lower D-Terminal signal. For example, a D4 connector can be used with a D4, D3, D2, or D1 signal, but not with a D5 signal.

It is possible to use a simple breakout cable to connect a D-Terminal connector to a standard 3 RCA jack or BNC component connection.[1]