The Nokia 7700 is a mobile phone produced by Nokia, announced in 2003 but never released.[1] It was expected to be the first multimedia smartphone from Nokia, and the first smartphone to use the Series 90 GUI on Symbian OS. 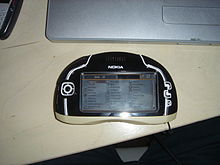 Compatible with GSM/HSCSD/GPRS/EDGE 900/1800/1900 MHz networks, the 7700 featured a wide, touch-screen colour LCD with a resolution of 640 x 320 pixels and supporting 65,000 colors. It had 64 MB of internal memory and a MultiMedia Card (MMC) slot. It also included an integrated VGA camera with a maximum resolution of 640 x 480 pixels, an integrated FM radio, Bluetooth, USB and Nokia's proprietary Pop-Port interface for connectivity purposes.

The 7700 was to include a comprehensive application suite (such as a complete PIM suite, 'full' Internet browser, e-mail client and an office suite comprising Word Processor, Spread-Sheet and a PowerPoint viewer) and supported Java MIDP 2.0 applications. It was also to be the first phone to support Visual Radio,[2] and the first Nokia phone to support DVB-H mobile television with the addition of the Nokia Streamer SU-6 accessory.

The Nokia 7700 was cancelled in mid-2004 [3]. Several theories for the cancellation were put forward at the time: Nokia was refocusing on 'normal' phones due to decreasing market share; the phone would be too late to market; and the phone was unattractive and bulky. It also featured 'sidetalking' like the N-Gage, a feature that had attracted a great deal of negative publicity.

The Nokia 7710 followed later with increased memory, a different design, no 'sidetalking' and other improvements. However, the 7700 was nevertheless used for further trials of DVB-H.[4][5]

As stated above, the Nokia 7700 was never released to the public. It was however sold in some markets for a few days. The phone at the time cost approximately 1500 Euros. An unknown number of phones were made as prototypes. However, in 2005, an auction on ebay Germany featured a used black Nokia 7700. It was sold for 2091.37 USD. The phone is considered a collectable.