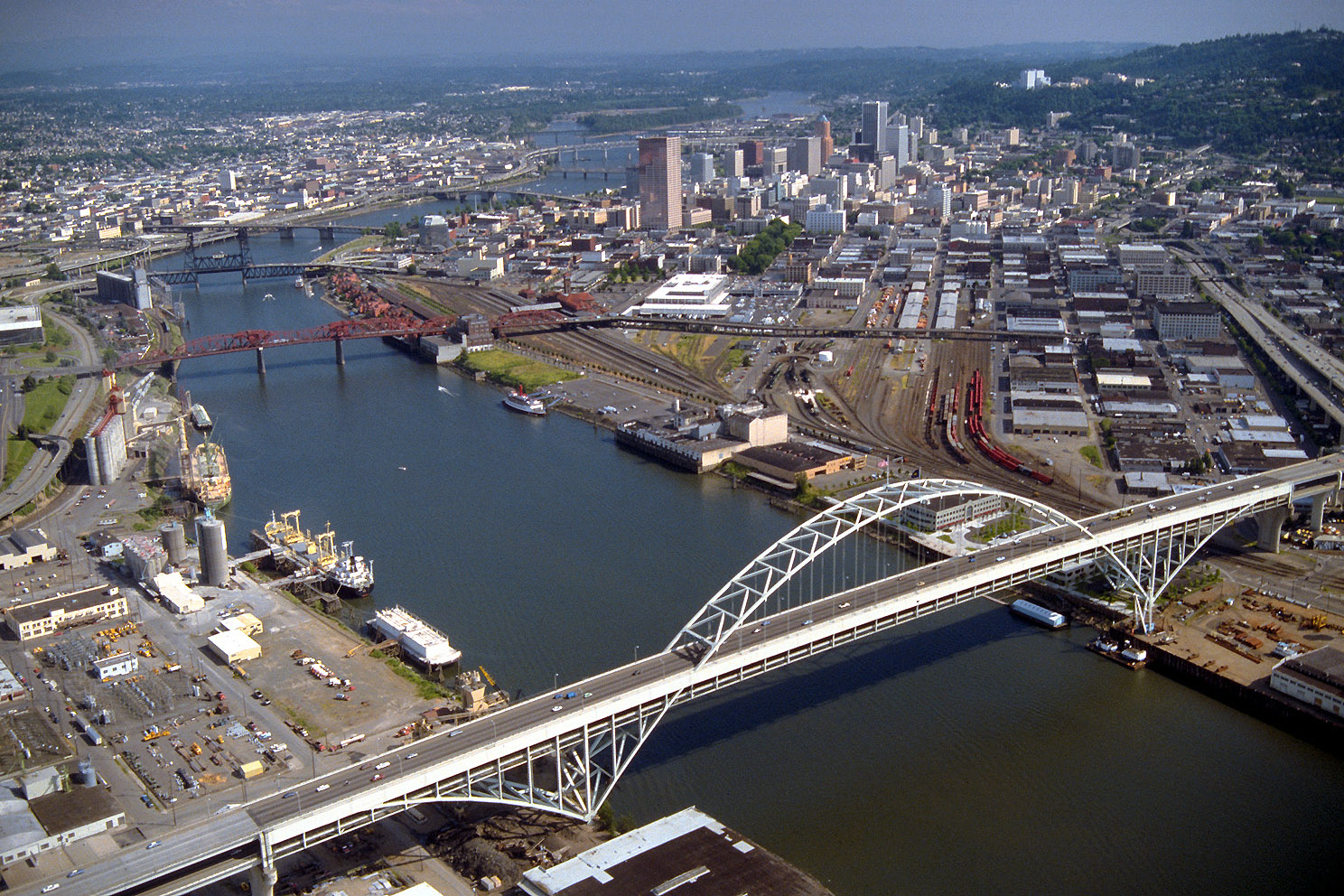 The Willamette River (pronounced Audio-IPA|WillametteRiver-English.ogg|wɨˈlæmɨt) is a of the . The name derives from a similar Clackamas Indian village name.

Part of the river's (the ) was established as a in 1987; ten years later the river was named as one of ten national .

The Willamette rises in three separate forks in the mountains south and southeast of Eugene, at the southern end of the Willamette Valley. The Middle Fork and North Fork rise on the western side of the Cascades between Three Sisters south to Diamond Peak. The Middle Fork receives the North Fork northwest of Oakridge and flows northwest through the mountains to the southern end of the Willamette Valley. The Coast Fork rises in the lower mountains south of Cottage Grove, flowing north to join the Middle Fork convert|2|mi|km southeast of Eugene.From Eugene, the combined river flows north-northwest across the plain of the southern Willamette Valley to Corvallis, then follows a zigzag course past Albany and around the isolated hills in the central valley, passing west of downtown Salem. From Salem it flows north in a ing course across the northwest plain of the valley, reaching the hills at Newberg, where it turns sharply east-northeast along the hills, passing through an opening in the hills at Oregon City, the location of the and the "de facto" . From Oregon City it flows northwest, past Lake Oswego and Milwaukie on the south edge of Portland, then passing between east and west Portland, where it is spanned by a series of urban bridges. Downstream of downtown Portland it flows northwest through the industrial port area of Portland Harbor, then splits into two channels around that both hook around to enter the Columbia from the west. The main channel enters on the north edge of Portland, and the smaller enters about convert|15|mi|km to the north-northwest at St. Helens.The river's many tributaries drain the surrounding valley as well as portions of the Cascades and the Coastal Range. Downstream from the confluence of its forks, it is joined by McKenzie on the north side of Eugene, and by the from the southwest approximately convert|10|mi|km south of Corvallis. It is joined by the Marys from the west at Corvallis, and the Calapooia from the southeast convert|5|mi|km northeast of Corvallis, and it is joined by the Santiam from the east and the Luckiamute from the west within convert|1|mi|km of each other approximately convert|5|mi|km north of Albany. It is joined by the Yamhill from the west at Dayton, by the Molalla from the southeast near Canby, by the Tualatin from the west at West Linn, and by the Clackamas from the southeast at Gladstone.

The river forms part of the boundary of the following counties: Benton, Linn, Polk, Marion, Yamhill and Clackamas. Tributaries of the Willamette River also drain some or all of Lane, Washington and Multnomah counties.

Although s navigated the upstream part of the Willamette into the first decades of the 20th century, currently there is little commercial traffic on the river above the . The allow boat traffic, primarily recreational vessels, around the falls. The river is crossed by three ferries along its route in the Willamette Valley. The three ferries are located (from south to north) at Buena Vista, Wheatland, and Canby. The only locks on the river are located at Oregon City.

The Willamette River is prone to periodic floods. The great winter flood of 1861 destroyed several towns, including Linn City, , and Scottsburg. The flood of 1894 seems to be the first flood well documented with photographs: one such famous picture depicts men thigh-deep in water in downtown Portland, pointing shotguns at decoy ducks as they float by in the flood waters. The great Flood of 1948 wiped Oregon's then second-largest city off the map. It was a WWII-era project city, built to temporarily house shipyard workers. The city stood near the confluence of the Willamette and Columbia Rivers, a spot later occupied by . Other notable floods include events in 1899, 1964, and the .

The Portland Harbor section of the Willamette River between downtown Portland and its terminus at the Columbia River is heavily polluted from years of industrial development of the river and its banks. Historical and current activities include , manufacture, processing, and transfer and storage of products. State studies in the 1990s identified a wide variety of pollutants in the river bottom, including heavy metals, s (PCBs), and . As a result of these studies, this section of the river was designated a site in 2000, [ cite news
url=http://portlandtribune.com/news/story.php?story_id=118341365933266700
title= History of a Superfund cleanup bid
author= Lee van der Voo
work=Portland Tribune
date=July 3, 2007
accessdate = 2008-02-12 ] involving the in cleanup of the river bottom. [ cite web
title = Portland Harbor Superfund Site
publisher = Oregon Department of Environmental Quality
url = http://web.archive.org/web/20061216212032/http://www.deq.state.or.us/nwr/PortlandHarbor/ph.htm
accessdate = 2006-12-16] The initial cleanup and containment of the pollutants is focused on the portion between Swan Island and . [ cite web
url = http://yosemite.epa.gov/r10/cleanup.nsf/sites/ptldharbor
title = Region 10 Cleanup: Portland Harbor
publisher =
accessdate = 2008-02-12 ]

The Superfund site is downstream from most of the river however and lies less than twelve miles from where the Willamette ends at the Columbia river. Further upstream the pressing environmental issues have been mainly variations in pH and dissolved oxygen. [ cite web
title = Processes Controlling Dissolved Oxygen and pH in the Upper Willamette River Basin
publisher = U.S. Geological Survey
date = 1994
url = http://or.water.usgs.gov/pubs_dir/Pdf/95-4205.pdf
format =
accessdate = 2008-02-12 ] In the Portland Metropolitan Area, these issues are exacerbated by sewer overflow events during periods of high rainfall. The city has embarked on expanding the sewer system in order to minimize these events through construction of the Big Pipe Project part of the river renaissance project.

Even further upstream however, the Willamette is not heavily polluted and is used by communities, such as the City of Tigard, for drinking water. The major contaminants are from agricultural runoff.

Following an agreement between the City of Portland and the State of Oregon to reduce s (CSOs) dramatically in 1991,

The project consisted primarily of two large pipes on either side of the river. The project was part of a larger effort by the Bureau of Environmental Services to reduce CSOs through a series of combined efforts, which had already netted results of a 53 percent reduction in CSO volume by 2003.

The west side pipe, which is approximately convert|14|ft|m in diameter and travels from Southwest Clay Street to the Swan Island Pumping Station, was completed in 2006.

As of June 2008, the east side pipe is under construction and is slated for completion in December 2011.

Together the pipes and other CSO projects will provide a 94 percent reduction in CSO volume by 2011, dramatically reducing one of the largest pollutants of the Willamette River.