Blind Chance (Polish: Przypadek) is a Polish film directed by Krzysztof Kieślowski. Made in 1981, the film was suppressed by the Polish authorities for several years, until its delayed release in 1987. The work branches out into three separate storylines, which are told in succession.

Witek (Bogusław Linda), sitting on an airplane, for some reason screams "No!" A bleeding person is dragged across a hospital floor. As a child, Witek learns how to write. As an adoloscent, Witek dates Czuszka. As an adult, Witek goes to medical school but 'loses' his calling after the death of his father. Witek decides to catch a train to Warsaw. There he crashes into a fellow drinking beer. Three different outcomes are shown, each depending on how Witek deals with the obstacles on his way to catching the train and whether or not he catches the train.

In the first scenario, Witek almost crashes into the fellow drinking the beer. He runs after the train and is able to grab onto the last car's handlebar just in time to pull himself aboard. On the train he meets Werner (Tadeusz Łomnicki), an old Communist. Witek decides to join the Communist Party. On a walk with Werner, Witek meets up with Czuszka (Bogusława Pawelec), his first love. The two meet up and have sex, after which a disappointed Czuszka discovers that Witek is applying to join the party. Witek unsuccessfully tries to solve a problem with an airline mechanic. Witek breaks up a sit-in at a hospital. As a reward, a party leader plans to send Witek on a special mission to France. On a walk with Czuszka, a policeman asks them for their papers. Since Witek is a Communist, he is allowed to go on his way, while Czuszka is detained. He attempts to make up with Czuszka, who is speaking at an opposition meeting, but she rejects him.

In the second scenario, Witek slams into the fellow drinking the beer with such force that the mug slips from the drinker's hand and falls to the floor, breaking and spilling. Witek doesn't stop to apologize but still fails to catch the train. Instead he runs headlong into a railway guard on the platform, knocks him to the ground, and runs off. The guard calls for backup and Witek is arrested. A judge sentences Witek to thirty days and unpaid community service. Witek joins the anti-Communist resistance and meets up with Daniel, a friend from his childhood, and his sister Wera. He is baptised and the figure of Christ on the cross becomes a significant emblem for him. Witek applies for a passport to go to France, but his request is denied because he is known to be an anti-Communist. The authorities offer him a passport on the condition that he discloses the underground's contacts in France. Witek goes home and begins foreplay with Wera, but is called away to the resistance's lair. The place has been ransacked and the one person left there doubts Witek's loyalty. 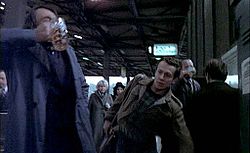 Witek about to crash with the fellow drinking beer.

In the third scenario, Witek almost crashes into the fellow drinking the beer but stops in time and goes around him, apologizing. He still tries to catch the train but fails. The railway guard shows up a few seconds later but now Witek has stopped to catch his breath. He notices Olga (Monika Gozdzik) on the platform (it's not clear if she was there in the previous two scenarios). Witek and Olga go back to his apartment where they make love on the floor. Witek decides to resume his medical studies and soon he graduates and starts practicing at the hospital as well as teaching at the medical school. Olga tells him she is three months pregnant, the two get married. At the medical school, some students pass around a petition on behalf of the dean's son, who is accused of hawking illegal literature. Witek refuses to sign the petition, noting that the dean himself hasn't signed either. Witek doesn't want to get involved in politics at all. The dean offers him a trip to Libya to give some lectures on medical topics he has prepared. Witek accepts. On the train to catch the plane, Olga tells Witek she's pregnant with their second child, hoping it is a girl. At the airport, Witek sees some of the people who were more important in the previous two scenarios. The plane taxis on the runway, Witek is comfortable in his seat. The plane takes off, but a few seconds later explodes.

As an example of Kieślowski's characters intersecting with history, Kickasola points out that Witek, who has the same birthdate (though not year) as Kieślowski (June 27, 1952), "ponders the irony of his 1956 birth date."[1] In 1981, Kieślowski announced he planned to develop the realist convention as "deeper, not wider."[2] With Blind Chance, Kieślowski "put his new philosophy partially into practice," but this film "still relies heavily on the political circumstances of Polish society to set the theme."[3] Paul Coates describes this film "as marrying a near-psychoanalytic 'Western' preoccupation with the effects of the death of the father ... to a typically 'East European' reluctance to renounce humanism by invoking such psychoanalytic scenarios as the Oedipal one."[4]

In their interviews on the DVD (both region 1 and 2), Agnieszka Holland and writer Annette Insdorf identify Sliding Doors as a film influenced by Blind Chance. In both films, the outcome hinges on whether or not the protagonist catches a train, but in Sliding Doors, only two scenarios are presented (protagonist catches the train, doesn't catch it). Run Lola Run does not involve trains, but is similar to Blind Chance in that three scenarios are presented hinging on how the protagonist negotiates a mad dash through a crowded space.

In Blind Chance the outcome of the life of the protagonist depends on how he handles the situation with the beer drinking fellow. In Run Lola Run, Lola had no choice. Her life depends on external factors. Her life changes because she is at the same place but a few seconds later. And so, she either runs under a car or she can just avoid it.

In Blind Chance, circumstances lead Witek to have a different character in each plot, echoed in Run Lola Run by the photographic montages shown of the people Lola passes along the way. First Witek is a communist, then a religious anticommunist, and finally he is apolitical.

The film was screened in the Un Certain Regard section at the 1987 Cannes Film Festival.[5]