Marple is a large village within the Metropolitan Borough of Stockport, in Greater Manchester, England. It lies on the River Goyt southeast of Stockport.

Known as Merpille by the early 13th century, probably from the words maere and pyll meaning "a pool or stream near the boundary".[1]

It is believed that the earliest residents of the area settled here several millennia ago, as a Celtic tribe[citation needed] There are clues of their existence dotted around the Ludworth area, with the Ludworth Standing Stones and the Tumuli, where they buried their dead. Much of this was confirmed around 1998 when an archaeological dig in Mellor revealed many clues about the existence of Marple's earliest residents. The area was predominantly woodland lying within the large Macclesfield Forest, and as such was omitted from the Doomsday survey. The first mention of the area was in 1122[citation needed] in a deed for the sale of land. 1220 saw the land pass to the Vernon family where it remained for several generations[citation needed] The pre-industrial revolution inhabitants of the village mostly worked on small agricultural farms in the area. With others specialising in linen weaving and hatting. After 1790, Samuel Oldknow transformed much of this lifestyle, with the construction of lime kilns and mills in the area.[2] The industrial revolution had arrived, and the population of the village began to rise with the construction of terraces to house mill workers and the formation of a village centre filled with private businesses.

In the early 1900s the town prospered from the success of cotton in nearby Stockport and Manchester, the canals in the area served as a vital link with other industrial hubs making Marple a very important area of infrastructure. The railway arrived in the mid 1800s and this saw the demise of the canal as a transport link. The railway opened the village to commuters. The village is still very much a commuter village for nearby Stockport and Manchester. It is also a popular choice for those who wish to be situated between Manchester and Sheffield due to the central location. 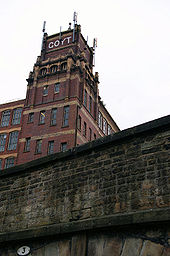 Goyt Mill was one of several cotton mills in Marple processing cotton goods.

The area covers just over 11 square miles (28 km²) of countryside, ranging from heavily wooded valleys to hill-top moorland. It rises from around 80 metres above sea level at the River Goyt to 327 metres at Cobden Edge. On a clear day it is possible to view the Beetham Tower in Manchester as well as the city centre, the Winter Hill TV transmitter and the surrounding counties of Cheshire, Derbyshire, Lancashire and West Yorkshire and the mountains of North Wales from the top of these hills. 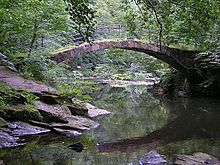 Footbridge over the River Goyt between Marple Bridge and New Mills

In 1866 Marple became a civil parish in Cheshire and in 1894 the parish formed an urban district.[3] The parish and district was expanded in 1936 by gaining Ludworth and Mellor from the Chapel-en-le-Frith rural district, an area of around 4,000 acres (20 km2).[4] In 1974 the urban district was abolished and its former area was transferred to Greater Manchester to form part of the Metropolitan Borough of Stockport.[5]

Marple is twinned with the town Motril in the province of Granada in Spain.[6] 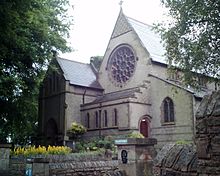 Marple is probably most famous for the series of canal locks, which sit just outside the village centre. The canal circles around the outskirts of the village, alongside both Marple Memorial Park and then along Brabyns Park until it reaches the Marple Aqueduct and onwards along the Peak Forest Canal. The canal served as a vital link for the village during the industrial revolution and is to be thanked for the sustained population in the area. Nowadays it provides an area of relaxation for walkers, anglers and boaters. The area is abundant with wildlife.

The Roman Lakes leisure complex within Marple is popular with walkers, anglers, nature lovers and horse riders. It is located in the valley bottom close to Strines. The area was named in the Victorian era as an attraction to tourists, and not due to the fact it had links with the Romans. This is also true for the picturesque Roman Bridge with spans the river. The area is a beautiful undisturbed natural landscape, with rich pastures, a flowing river and spectacular surroundings. The area closest to the river was once a mill built by Samuel Oldknow, it is now ruined and overgrown.

The Marple Aqueduct is an impressive landmark which towers high above the River Goyt as it carries the Peak Forest Canal.

The Middlewood Way is a popular 10-mile walking/cycling path starting at Marple and ending at Macclesfield, following the now defunct railway line.[7]

In 2008, Marple was used as the setting for the BBC Drama Sunshine. Many of the locations used in the programme are in and around the Marple area. Marple also featured on a BBC Documentary on Dr Beeching and the effect of axing the Railway. The programme highlighted the transport issues in Marple, and how getting the train from Marple to Stockport was impossible, and the traffic was bad making the journey one of the most difficult in the UK.

In 2010, Marple was used as the filming location for BBC3's "White Van Man" starring Will Mellor as a man who reluctantly takes over his father's painting and decorating business.

Marple Hall is located close to where Marple Hall School now stands. The remains of the once grand hall can be explored, though very little actually remains. The House was home to the Bradshaws and was their ancestral home, later passing to the Isherwoods. The house was demolished in 1959 after an offer of the house in 1954 to the council by the writer Christopher Isherwood, who had inherited the hall, though at this time it was too late, and the hall had become ransacked by vandals and looters.Much of the estate is now either residential housing or the school. The old hall foundations can still be seen on the corner of Marple Hall Drive. There is a plaque from a piece of stone which is the only remaining lintel from the house. The shutters from the windows of the house are restored and on display in Marple Library. Legend has it that the ghost of a headless woman haunts the grassed area around the ruins. The Hall overlooked the River Goyt and it is still possible to walk from the Hall down to the River, following the old pathway which once led to the Dooley Lane entrance to the estate. There are cobbles leading from Marple Hall Drive down to the Hall which are originals. Many old grand trees in the area also date from the time of the Hall.

Sadly this is not the only ruined hall in the Marple area with nearby Brabyns Hall suffering a similar fate. Wybersley Hall, now in private ownership, also stood ruined for a time. 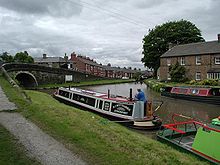 Junction of Peak Forest Canal and the Macclesfield Canal in Marple

The village is served by two railway stations: Marple Station (on the Hope Valley line) and Rose Hill Marple Station (originally on the now-defunct Macclesfield, Bollington and Marple Railway). It is also the junction of the Peak Forest Canal and the Macclesfield Canal. The two canals form part of the Cheshire Ring canal system.[8] Marple Aqueduct can be found a short walk from the village centre. The village has many bus services running through it, most of which go to Stockport via the A626 and Offerton, along with an hourly service to Glossop in Derbyshire and Stepping Hill Hospital in the other direction. It also has bus services to Hayfield and New Mills, also in Derbyshire.

The Agatha Christie character Miss Marple was named after the railway station on the Manchester to Sheffield Hope Valley line, at which Christie was once delayed.

East of Rose Hill station there is a Manchester overspill council estate which was constructed around the late 1940s-mid 1950s to rehouse people away from Victorian slums of inner-city Manchester or areas of the city destroyed by World War II bombings. 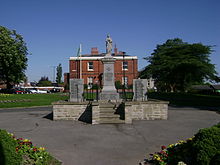 Its secondary school – Marple Hall School – sits on the site of the ancestral home of the Bradshaw-Isherwood family. There is also Cheadle and Marple Sixth Form College (formerly Ridge Danyers College) a local college offering courses to young people and adults. There are 2 primary schools in Marple, Rose Hill, which has recently merged with the schools 'The Dale' & 'Peacefield' and All Saints, which is a Church of England school. Additionally there is an independent school and nursery Brabyns Preparatory School and Bowden House Day Nursery, offering childcare for children ages 6 months to 5 years.

Marple Rugby Club play their home matches at Wood Lane. They have 3 Adult teams with their 1st XV currently playing in the South Lancs Cheshire 3 division. They have a healthy Marple Minis Rugby outfit with teams from age 7 to 17. 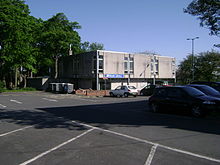 Marple Cricket Club was formed in approximately 1900 and has been based at its Bowden Lane Headquarters since 1951. The club is a member of the Cheshire Cricket League and currently plays in Division 1. The club runs four senior teams, the First and Second Teams playing on Saturdays and the Third and Fourth Teams on Sundays in Division 1 & 3 respectively of the Cheshire County League. The club also has a junior section.

The Cricket Club built a squash section in the 1970s and this still thrives today.

The squash section has three courts and four teams playing regular club squash. A junior section has recently[when?] opened under qualified coaches from the club's membership.

The club also has a non-playing membership and excellent bar facilities, with a function room available for hire to non-club members. This has been recently[when?] re-furbished and is an excellent location for a 21st or a family party. A quality range of beers, including hand pulled guest bitters is available.

Brabyns Tennis Club is situated off Brabyns Brow between the canal bridge and the railway station. It has four clay courts and three floodlit artificial grass courts, enabling year-round play. The Club has several Mens and Ladies teams in the Slazenger North East Cheshire League and Mixed teams in the East Cheshire Winter League. There is a strong Junior section and extensive coaching programme.

Marple Golf Club, founded in 1892, is located in Hawk Green, Marple. It is an 18 hole private members course. 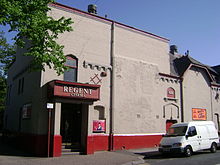 Since 1932 Marple has had its own cinema, in a building originally designed (in 1878) as a place of worship/refuge. After the building was purchased in 1932 by "The Marple Cinema Company" it became The Regent cinema.[10] It remains open to this day,[11] as one of the few independent cinemas in the UK. Marple also hosts the Carver Theatre,[12] originally built as a Boy's Club and gymnasium.[13] The Carver Theatre now annually hosts the 1st Marple Scout and Guide Gang Show every March.

The village has two brass bands, The Marple Band, and the Hawk Green (Marple) Band.

It is believed that Marple Hall holds the home of many ghosts from the 16th century, seen by students and dog walkers from time to time, a middle aged man and a lady in black. The Goyt Mill in Hawk Green is also said to be one of the most haunted places in Cheshire from murdered children to suicides, these ghosts can be seen in windows, inside and on the roof of the mill,also around the residential homes across the road.