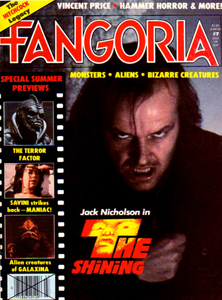 "Fangoria" is an internationally-distributed US specializing in the s of horror, slasher, splatter and s, in regular publication since .

"Fangoria" was first planned in under the name "Fantastica" as a companion to the science fiction media magazine "Starlog"; just as "Starlog" covered films for a primarily teenaged audience, "Fantastica" was intended to cover for a similar audience. The publishers were anticipating a groundswell of interest in fantasy owing to the plans at that time for bringing 's "" to the screen, plans first announced in .

The Conan film did not arrive until several years later and, when it did, no groundswell in the demand for fantasy films occurred. But before the magazine was even launched, other factors intervened to change the magazine's focus and direction.

The first issue was assembled under the editorship of "Joe Bonham," a pseudonym taken from the quadriplegic hero of Dalton Trumbo's pacifist novel "". This was a cover for "" contributor and screenwriter Ed Naha and writer Ric Meyers, best known for his encyclopedic "Great Martial Arts Movies: From Bruce Lee to Jackie Chan."

Shortly after the publishing trade press announced the coming launch of "Fantastica", the publishers of a "Starlog" competitor, "" magazine, brought suit on the basis of "unfair trade," contending that its young audience would be confused by the magazine's similar title.

The launch of the magazine was delayed by several months as the court deliberated the issue. When, in early 1979, the decision was made in favor of the plaintiff, the publishers of "Fantastica" were without a usable name, and a pressing need to get the long-delayed issue to the printers. Some quick brainstorming sessions resulted in the name Fangoria, over the objections of , who was hired as editor during the delay.

The first issue of "Fangoria" was entirely designed around the original "fantasy film" concept for the magazine, and proved to be an abysmal failure, as were several issues that followed, all continuing with the same conceptual approach.

By the time that issue number four was on the stand and number six was in preparation, the publisher confided to Martin that the magazine was losing approximately $20,000 per issue, not an amount that the small publisher could continue to sustain for long.

Two phenomena allowed Martin to reshape the magazine and bring it back from the abyss of debt. First, was the immensely positive audience response to one of the articles that appeared in the first issue of "Fangoria", an article that celebrated the craft of special makeup effects artist , and his very wet-looking special effects for the 1978 film "Dawn of the Dead".

Second was the palpable stench of defeat that was surrounding "Fangoria". With its demise all but certain, senior employees and the two owners of the publishing firm stood back from the fray and allowed the untried young editor to take the lead, reshaping the entire book according to what he believed would work.

Issue seven, with a cover story on 's adaptation of 's "The Shining", was the first issue of any national magazine to wholly concern itself with horror film as produced in the closing quarter of the 20th Century, with no trace of daintiness about its subject matter. It also was the first issue of "Fangoria" to achieve a profit.

Subsequent issues would sharpen the focus, but by issue twelve, the formula was well-set, and remains largely unchanged to this date. Martin continued as editor to , with co-editor David Everitt added in the early 1980s, and after leaving "Fangoria" worked with film director on the screenplays for "" and "". Everitt left the magazine shortly after Martin's departure, and was replaced by current editor .

In the late 1980s and early 90s, "Fangoria" tested the horror market in numerous international markets, releasing issues of the magazine modified for various foreign languages. These publishings (released in Italy, Japan, Czechoslovakia, and elsewhere) lasted only a handful of editions before being discontinued.

In 1990, Timpone brought current managing editor on-board, having been previously introduced to his horror-themed , "Scareaphenalia".

As they have been since their inception Fangoria Magazine is currently the most widely-read horror-themed publication in the world. Their center of operations, as of 2008, is based in 's .

Starting in 1985 and carrying on to today, "Fangoria" has sponsored annual horror movie conventions known as the in Los Angeles, New Jersey, and Chicago (with Austin, Texas added in 2008). [ [http://www.fangocon.com Official Website of Fangoria's Weekend of Horrors Conventions] .] These conventions are produced in association with .

In 1991, "Fangoria" began honoring horror cinema with their annual Chainsaw Awards, which were voted on by readers of their magazine. The winners were announced at an awards show in , which was produced by Fangoria's managing editor, Michael Gingold. While the Chainsaw Awards continued in the magazine, the awards show was stopped after 1996.

In 1990, "Fangoria" created , with the goal of financing one feature film a year under this banner. The first film was 1990's "Mindwarp", starring . They then created "Children of the Night" in 1991 and "Severed Ties" in 1992 before ceasing production. [ [http://www.imdb.com/company/co0060480/#productionX20company Motion Pictures produced by Fangoria Films] , Internet Movie Database, Accessed: 15 May 2008]

In 1996, Fangoria Films re-emerged as a distribution company, occasionally using their "Gore Zone" label, to release twenty low-budget horror features over the next ten years.

From 1999 to 2003, they partnered with Bedford Entertainment to attain wider releases of certain "Fangoria" titles [ [http://login.vnuemedia.com/hr/google/login_subscribe.jsp?id=EhTA1werc%2F8oJkXd3AvIhVqJMQ%2BEsnoUjFFnmSZpudrVtJLf7Nv3guKhcy0wXloTlCfF%2BKeotWJu%0AoovWlvTUDDXVs2GHsomf%2FylvwSsL8e7HuGIv3MU9%2F823YPUNCUObX4glGMDXaWDTAt%2BeaaDkL0Bw%0A0ALn51mZfjhEOkv73OYdGiEEkB434ibdqLMeb4KKyEGwjeofIk4r77yZMcG1mLObXujRjy8liyXJ%0AKUEqWkxQLXjGhkxPQYpLBZYc0XZG Fangoria Takes Bite out of Film Market] , Hollywood Reporter (Subscription required for full article), Accessed: 16 May 2008] . Movies released during this time included ', "", "Slashers", and "Dead Meat" [ [http://www.imdb.com/company/co0060480/#distributor Motion Pictures distributed by Fangoria Films] , Internet Movie Database, Accessed: 15 May 2008] . Many of these films featured the "Fangoria" logo along the top of their video/DVD covers, while "Fangorias involvement in other releases was substantially more subdued.

After their purchase by Creative Group in the early 2000s, they developed Fangoria Entertainment. This allowed both parties to attach the "Fangoria" brand identity to a number of other media outlets in 2006. Creative Group also added a new "Vampire Skull" logo to Fangoria's properties, which has been used extensively online since its inception.

* Fangoria TV, originally conceived as a network television station dedicated to horror films, was eventually modified to fit a limited online format in 2006.

* debuted on Friday, , . It is a horror-themed talk radio program which now airs on Channel 102 on Friday nights. It is hosted by , , and regularly features "Fangoria" editor .

* In association with , "Fangoria" first televised its Chainsaw Awards in 2006. The event occurred on October 15, and was aired on FUSE on October 22. The event was not renewed for 2007, although the awards continued in the magazine. [ [http://www.cinematical.com/2006/08/26/fango-announces-chainsaw-nominees/ "Fangoria" Announces Chainsaw Nominees!] , Cinematical, August 26, 2006]

"Fangoria" has appeared or been mentioned in various media outlets, usually pertaining to its significance to the horror film industry.

*One of the flatmates in BBC2's "The Young Ones" is seen reading an issue of "Fangoria" in the 1984 episode "Nasty" (an episode about them attempting to watch a VHS ).

*The film "" (1994) prominently features "Fangoria", giving the magazine a rather important role in the movie. It is through an ad in the magazine that the main character discovers the titular video game.

*In "" episode "" (1996), bus driver Otto Mann takes a photograph of with various foodstuff stuck in her hair, claiming, "Fangoria" will pay me fifty bucks for this photo!" Several months later, the magazine published the "pic" of Lisa with the gum in her hair.

*"Chucky" masturbates while looking at an issue of "Fangoria" in the film "" (2004).
**Additionally, the "Child's Play" comic series by features Chucky reading a copy of "Fangoria" in issue one; and a character named Russ Timpone, who claims to have no relation to ("even though that'd be cool"), appears in the same tale. [ [http://www.iconsoffright.com/Comic_Maniac.htm Movie Maniac Comic Books - Child's Play] Icons of Fright.com, Accessed June 11, 2008]

*In in the 2004 music video of "" by the band , "Fangoria" is listed in the introduction as one of the main characters interests.

* () wears a black Fangoria t-shirt throughout the "" episode, "Cleveland".

*In the 2007 film "", an issue of "Fangoria" is displayed in a magazine rack at a convenience store.