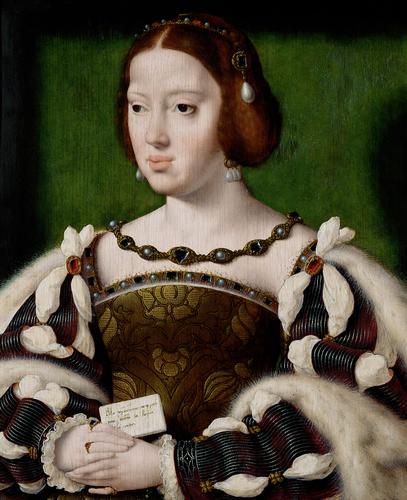 Eleanor of Austria, also called Eleonor of Castile ( &ndash; ) was born Archduchess of and from the House of , became subsequently in turn Queen Consort of (1518&ndash;1521) and of , also Duchess of (1547&ndash;1558) as . Named Leonor de Austria in Spanish, Leonor in Portuguese and "royne Éléonore" or Aliénor in French.

When she was young, her relatives tried to marry her to the King of (Henry VII or Henry VIII), the French King (Louis XII or ) or with the Polish King (Sigismund I), but they could not. Finally they married her to , after the proposed marriage with her cousin (the Crown Prince) did not occur. They married . They had two children: the Infante Carlos (who died as a child, born ) and the Infanta Maria (born , and who was later one of the richest Princesses of Europe). She became a widow on , 1521, when Manuel died of the plague.

Some time later as a widow, by the treaty called "La Paz de las Damas" ("The Ladies' Peace") she was married to on . They had no children.

As the French Queen she did not have any political power; however, she was used as a contact between France and the . She was Charles V's favorite sister. She died in 1558 on the return trip from , where she tried to make peace with her daughter Maria.