The Apostolic Throne of the Coptic Orthodox Church of Alexandria is based in the ancient Alexandria, Egypt, which is in Africa. The jurisdiction of the Church of Alexandria extended, as per Canon law of the First and Second Ecumenical Councils, to the Province of Egypt, Nubia and Pentapolis. Later on in expanded south to encompass all of what is now known as the Sudan.

Since the demise of the Latin (Roman) North African Archiepiscopate of Carthage (which covered all of North and West Africa, apart from Egypt, Pentapolis & Libya) in the 8th century, Alexandria became the sole Apostolic Throne in the entire continent of Africa (or what was known of it at that time). The historical evangelization of the Apostolic Throne of Alexandria in Africa, apart from Egypt, Pentapolis, Libya, Nubia and the Sudan, does extend to: 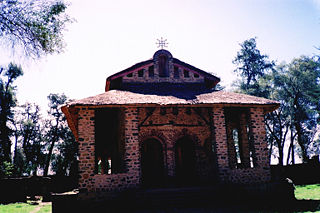 Ethiopia constituted a major archdiocese of the Church of Alexandria, which was always governed by an Egyptian Patriarchal Vicar in the rank of Archbishop since the 4th century, and named Abuna Salama by the Ethiopian Church. By 1929, the Alexandrine Throne allowed the Ethiopian clergy to participate in the governing of their own Church, and the first native Ethiopian archbishop was enthroned in 1930 (thus becoming an autonomous church).

In 1959, an agreement was reached between the Ethiopian Holy Synod and the Alexandrine Throne to have their own Patriarch-Catholicos in a transitional period. The Ethiopian Archbishop ordained as Primate of the Ethiopian Orthodox Church back in 1950, was elevated by the Coptic Orthodox Pope of Alexandria Joseph II in Cairo and enthroned in Addis Ababa by the members of the Ethiopian Holy Synod and an Alexandrine delegation. The first Prelate, Abuna Basilius I (1959-1971), Patriarch-Catholicos of Addis Ababa and all Ethiopia, was ordained and enthroned in 1959, by Pope Cyril VI of Alexandria.

The Patriarchate of Addis Ababa and of all Ethiopia is now headed by its 5th Patriarch, Abuna Paulos I (1992- ). This is after the Patriarchates of Abuna Theophilus I (1971-1979) (Deposed in a non-canonical way in 1976, sent to prison and murdered in prison in 1979), Abuna Tekle Haimanote I (1976-1988) (who was elected in a non canonical manner by pressure of the then Communist Government to replace his predecessor.) and Abuna Mercurios I (1988-1991), (who resigned under pressure, due to the accusation of collaborating with the (Dereg) Menghistu Communist Regime, and who is now living in self exile in Kenya).

Recently, the relation between the two churches improved significantly upon the signing of common declaration by the two patriarchs and the visit of Abuna Paulos to Egypt and the visit of Pope Shenouda to Ethiopia.

This country, who had both Egyptian expatriates and native adherents, is divided into two eparchies and whose prelates are:

The number of Coptic Sudanese is estimated around 200,000.

Christianity spread to the Pentapolis of North Africa from Egypt [1] ; Synesius of Cyrene (370-414), bishop of Ptolemais, received his instruction at Alexandria in both the Catechetical School and the Museion, and he entertained a great deal of reverence and affection for Hypatia, the last pagan Neoplatonists, whose classes he had attended. Synesius was raised to the episcopate by Theophilus, patriarch of Alexandria, in 410 A.D. Since the Council of Nicaea in 325 A.D., Cyrenaica had been recognized as an ecclesiastical province of the See of Alexandria, in accordance with the ruling of the Nicaean Fathers. Pope of the Coptic Orthodox Church of Alexandria to this day includes the Pentapolis in his title as an area within his jurisdiction.[2].

The Coptic congregations in these countries were under the ancient Eparchy of the Western Pentapolis, which was part of the Coptic Orthodox Church for centuries until the thirteenth century [3]

In 1971 Pope Shenouda III reinstated it as part of the Eparchy of Pachomius, Metropolitan of the Holy Metropolis of Beheira (Thmuis and Hermopolis Parva), (Buto), Mariout (Mareotis), Marsa Matruh (Paraetonium), (Apis), Patriarchal Exarch of the Ancient Metropolis of Libya: (Livis, Marmarica, Darnis and Tripolitania) and Titular Metropolitan Archbishop of the Great and Ancient Metropolis of Pentapolis: (Cyrenaica), (Appollonia), (Ptolemais), (Berenice) and (Arsinoe).

This was one among a chain of many restructuring of several eparchies by Pope Shenouda III, while some of them were incorporated into the jurisdiction of others, especially those who were within an uncovered region or which were part of a Metropolis that became extinct, or by dividing large eparchies into smaller more manageble eparchies. This was part of the restructuring of the Church as a whole.

Although The Coptic Orthodox Church had a bishop for missionary affairs in Africa in the 1950s this was not continued after the death of that bishop. [4]

There are 2 bishops dealing with Sub-Saharan Africa:

Bishop Paul was originally a deacon then a celibate priest, he was then tonsured as a hieromonk before he was consecrated as a bishop. Both bishops were physicians before becoming full time clergymen.

1: The region of "Africa", in this case, does not include Egypt, Ethiopia, Eritrea, Sudan, Libya, Tunisia, Algeria and Morocco, as these nations have several of their own Coptic Bishops who shepherd their respective dioceses. In Ethiopia and Eritrea, their Churches have a recognized autocephalous status. Therefore, this table's data is solely on Sub-Saharan African countries.