The National Rail Museum is a museum in Chanakyapuri, New Delhi which focuses on the rail heritage of India it opened on the 1 February, 1977. It is located in over 10 acres (40,000 m2) of land[1] with both indoor and outdoor exhibits. A toy train offers rides around its site on regular days. The museum houses the world's oldest operational steam locomotive the 1855 built Fairy Queen certified by the Guinness Book of Records. 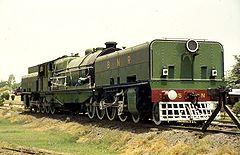 A Beyer Garratt 6594 Engine at the National Rail Museum