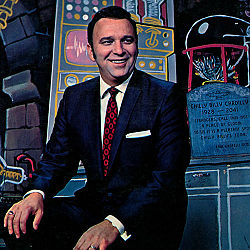 Originally from Sharon, Pennsylvania, Cardille was long a fixture on the former WIIC Channel 11, the NBC affiliate in Pittsburgh, and was the first voice heard when the station went on the air on September 1, 1957.

Cardille is probably best known as Chilly Billy, the host of Chiller Theatre, a late night Saturday program that showed horror and science fiction films. It is this program for which Cardille is best remembered, earning him his famed nickname. The program aired from 1963 until its cancellation in 1983. Joe Flaherty, a Pittsburgh native, acknowledges this show as an influence in the formation of the popular "Monster Chiller Horror Theatre" sketches on SCTV.

Cardille also hosted other programs including Studio Wrestling, and a combination game show /movie program that ran in the late afternoon. He hosted a teen dance show, the Four O'Clock Money Movie, and Movies to Laugh By for WIIC. He remains the local host for the Jerry Lewis MDA Telethon. Cardille appeared in both the 1968 original version and the 1990 remake of Night of the Living Dead, in the television movie, The Assassination File, and in the documentary American Scary. He was especially famous in Boston, where the weekly pro wrestling program was extremely popular. Cardille also called the play-by-play of western Pennsylvania high school basketball playoff games for many years on WQED-TV, the Pittsburgh PBS affiliate. Cardille also hosted morning radio shows on Pittsburgh radio stations WWSW and WIXZ.

Outside of broadcasting, Cardille owned and operated Chilly Billy Cardille Travel and Tours in Wexford for many years, which was managed by his son, Bill Jr.

Currently he can be heard on radio station WJAS AM 1320 in the mid-day slot. He resides in McCandless, in Pittsburgh's North Hills, with his wife Louise. He is also the father of actress Lori Cardille who played the lead role in Romero's Day of the Dead.