Main chain of the Alps

Main chain of the Alps 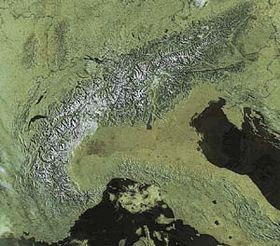 The Main chain of the Alps.

The Alpine divide is the central line of mountains that forms the water divide of the range. Main chains of mountain ranges are traditionally designated in this way, and generally include the highest peaks of a range; the Alps are something of an unusual case in that several significant groups of mountains are separated from the main chain by sizable distances. Among these groups are the Dauphine Alps, the Eastern and Western Graians, the entire Bernese Alps, the Tödi, Albula and Silvretta groups, the Ortler and Adamello ranges, and the Dolomites of South Tyrol, as well as the lower Alps of Vorarlberg, Bavaria and Salzburg.

The Alps are generally divided into Western Alps and Eastern Alps, cut along a line between Lake Constance and Lake Como, following the Rhine valley. The Western Alps are higher, but their central chain is shorter and much curved; they are located in France, Italy and Switzerland.

Starting from the Col d'Altare or di Cadibona (west of Savona), the main chain extends first south-west, then north-west to the Col de Tenda, though nowhere rising much beyond the zone of coniferous trees. Beyond the Col de Tenda the direction is first roughly west, then north-west to the Rocca dei Tre Vescovi (2,840 m), just south of the Enciastraia (2,955 m), several peaks of about 3,000 metres rising on the watershed, though the highest of all, the Punta dell'Argentera (3,297 m) stands a little way to its north. From the Rocher des Trois Eveques the water divide runs due north for a long distance, though of the two loftiest peaks of this region one, the Aiguille de Chambeyron (3,412 m), is just to the west, and the other, the Monviso (3,841 m), is just to the east of the divide. From the head of the Val Pelline the main chain runs north-west, and diminishes much in average height until it reaches the Mont Thabor (3,178 m), which forms the apex of a salient angle which the main chain here presents towards.the west. From here the divide extends eastwards, culminating in the Aiguille de Scolette (3,505 m), but makes a great curve to the north-west and back to the south-east before rising in the Rochemelon (3,509 m). From there the direction taken is north as far as the eastern summit (3,619 m) of the Levanna, the divide rising in a series of snowy peaks, though the loftiest point of the region, the Pointe de Charbonel (3,760 m), stands a little to the west. Once more the chain bends to the north-west, rising in several lofty peaks (the highest is the Aiguille de la Grande Sassière, 3,751 m), before attaining the considerable depression of the Little St Bernard Pass.

The divide then briefly turns north to the Col de la Soigne, and then north-east along the crest of the Mont Blanc chain, which culminates in the peak of Mont Blanc (4,810.45 m),[1] the loftiest in the Alps. A number of high peaks line the divide before it attains Mont Dolent (3,823 m). From there, after a short dip to the south-east, the chain takes, near the Great St. Bernard Pass, the generally eastern direction that it maintains until it reaches Monte Rosa, whence it bends northwards, making one small dip to the east as far as the Simplon Pass. It is in the portion of the watershed between the Grande St Bernard Pass and the Simplon that the main chain maintains a greater average height than in any other part. But, though it rises in a number of lofty peaks, such as the Mont Vélan (3,727 m), the Matterhorn (4,478 m), the Lyskamm (4,527 m), the Nord End of Monte Rosa (4,575 m), and the Weissmies (4,023 m), many of the highest points of the region, such as the Grand Combin (4,314 m), the Dent Blanche (4,357 m), the Weisshorn (4,505 m), the true summit or Dufourspitze (4,634 m) of Monte Rosa itself, and the Dom (4,545 m), all rise on its northern slope and not on the main chain. On the other hand the chain between the Grande St Bernard and the Simplon sinks at barely half a dozen points below a level of 3,000 metres. The Simplon Pass corresponds to what may be called a dislocation of the main chain. From there to the St. Gotthard the divide runs north-east, all the higher summits (including the Monte Leone, 3,533 metres, and the Pizzo Rotondo, 3,192 m) rising on it, a curious contrast to the long stretch just described. From the St. Gotthard to the Maloja the watershed between the basins of the Rhine and Po runs in an easterly direction as a whole, though making two great dips towards the south, first to near the Vogelberg (3,220 m) and again to near the Pizz Gallagiun (3,107 m), so that it presents a broken and irregular appearance. But all the loftiest peaks rise on it: Scopi (3,200 m), Piz Medel (3,210 m), the Rheinwaldhorn (3,402 m), the Pizzo Tambo (3,279 m) and Piz Timun (3,209 m).

From the Maloja Pass the main watershed dips to the south-east for a short distance, and then runs eastwards and nearly over the highest summit of the Bernina Range, Piz Bernina (4,049 m), to the Bernina Pass. Then to the Reschen Pass the main chain is ill-defined, though on it rises the Corno di Campo (3,305 m), beyond which it runs slightly north-east past the sources of the Adda and the Fraele Pass, sinks to form the depression of the Ofen Pass, soon heads north and rises once more in the Piz Sesvenna (3,204 m).

The break in the continuity of the Alpine chain marked by the deep valley, the Vinschgau, of the upper Adige is one of the most remarkable features in the orography of the Alps. The little Reschen Lake, which forms the chief source of the Adige is only 4 metres below the Reschenpass (1,504 m), and by it is 8 km from the Inn valley. Eastward of this pass, the main chain runs north-east to the Brenner Pass along the snowy crest of the Ötztal and Stubai Alps, the loftiest point on it being the Weißkugel (3,739 m, Ötztal), for the highest summits both of the Ötztal and of the Stubai districts, the Wildspitze (3,774 m) and the Zuckerhütl (3,505 m) stand a little to the north.

The Brenner (1,370 m) is almost the lowest of all the great Carriage-road passes across the main chain, and has always been the chief means of communication between Germany and Italy. For some way beyond it the watershed runs eastwards over the highest crest of the Zillertal Alps, which attains 3,510 metres in the Hochfeiler. But, a little farther, at the Dreiherrnspitze (3,499 m), the chain splits, and it is unclear whether the higher peaks branching off to the south or the smaller divide that continues on the same eastward path as the earlier mountains should be considered the main chain.

The main chain has more glaciers and eternal snow than the independent or external ranges. The longest of these are both 9¼ miles, the Mer de Glace at Chamonix and the Gorner Glacier at Zermatt. In the Eastern Alps the longest glacier is the Pasterze Glacier (rather over 6¼ miles), which is not near the true main watershed, though it clings to the slope of the Hohe Tauern range, east of the Dreiherrenspitze. But the next two longest glaciers in the Eastern Alps (the Hintereis, 6½ miles, and the Gepatsch, 6 miles) are both in the Ötztal Alps, and so close to the true main watershed.