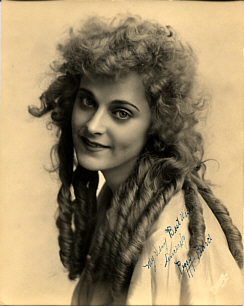 She was born Gladys Viola Wilson in the daughter of . She moved with her family to where her father would become the socialist from 1911-1913.

In 1910, Barry signed with the Belasco Theater Company to be their new ingénue. Prior to this, she had four years of stage experience, two of these with Benson's Shakespearean Company in . Among the heroines she played were Viola, Juliet, Portia, and Rosalind. Her first appearance with the Belasco company was in "The Test" by Jules Eckert Goodman.

She was in motion pictures from 1911 through 1920. Her early screen credits include "The Totem Mask", "The Voyager: A Tale of Old Canada", "McKee Rankin's '49", "John Oakhurst, Gambler", "An Indian Vestal", "Coals of Fire", "A Painter's Idyl", "The Chief's Daughter", "George Warrington's Escape", and "Evangeline". All these were completed in her first year in movies.

In February 1911, Barry married John Conway (aka actor and film director Jack Conway) of the Bison Moving Picture Company in . They had one daughter, Rosemary. The couple divorced in 1918. Barry subsequently married screenwriter Frank McGrew Willis with whom she had four more children: Virginia, Gloria, McGrew, and James.

Viola Barry Willis died in 1964 in . She was buried at the Mountain View Cemetery in .