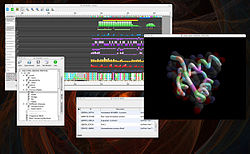 UTOPIA tools on a Mac

UTOPIA (User-friendly Tools for OPerating Informatics Applications) is a suite of free tools for visualising and analysing bioinformatics data. Based on an ontology-driven data model, it contains applications for viewing and aligning protein sequences, rendering complex molecular structures in 3D, and for finding and using resources such as web services and data objects.

Between 2003 and 2005 work on UTOPIA was funded via The e-Science North West Centre based at The University of Manchester by the Engineering and Physical Sciences Research Council, UK Department of Trade And Industry, and the European Molecular Biology Network. Since 2005 work continues under the EMBRACE European Network of Excellence.

UTOPIA's CINEMA (Colour INteractive Editor for Multiple Alignments), a tool for Sequence Alignment, is the latest incarnation of software originally developed at The University of Leeds to aid the analysis of GPCRs. SOMAP[1], a Screen Orientated Multiple Alignment Procedure was developed in the late 1980s on the VMS computer operating system, used a monochrome text-based VT100 video terminal, and featured context-sensitive help and pulldown menus some time before these were standard operating system features.

SOMAP was followed by a Unix tool called VISTAS[2] (VIsualizing STructures And Sequences) which included the ability to render 3D molecular structure and generate plots and statistical representations of sequence properties.

The first tool under the CINEMA[3] banner developed at The University of Manchester was a Java-based applet launched via web pages, which is still available but is no longer maintained. A standalone Java version, called CINEMA-MX[4], was also released but is no longer readily available.

A C++ version of CINEMA, called CINEMA5 was developed early on as part of the UTOPIA project, and was released as a stand-alone sequence alignment application. It has now been replaced by a version of the tool integrated with UTOPIA's other visualisation applications, and its name has reverted simply to CINEMA.