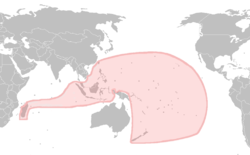 The concept of a Malay race (Malay: Bangsa Melayu) was proposed by the German scientist Johann Friedrich Blumenbach (1752–1840), and classified as the brown race.[1] Since Blumenbach, many anthropologists have rejected his theory of five races, citing the enormous complexity of classifying races. The concept of a "Malay race" differs with that of the ethnic Malays centered around Malaysian Malay Peninsula and parts of the Indonesian island of Sumatra.

The term Malay race, was commonly used in the late 19th century and early 20th century. These peoples occupy an area that is generally coextensive with the area dominated by Austronesian peoples.[2] The Malayan race are Austronesian people, though some used to claim they were a subrace of the Mongolian race.[3]

With new scientific evidence presented by HUGO (Human Genome Organization) through genetic studies of the Asian races, the facts points to a single Asian migration from the South East Asian regions (which is predominantly populated by Austronesian races) travelling northwards and slowly populating East Asia (China, Korea and Japan) instead of the other way around as usually depicted.[4]

The Etymology of Malay or Melayu goes back to the 7th century and is derived from what the Kshatriya ruling class of the Srivijaya Kingdom, who were from South West region of India (known as Malainadu) speaking Tamil a Dravidian dialect named from Ancient times from Malaya Mountains where it originated (The Malayali. This is evidenced by the Balinese Kshatriya's, who claim ancestral origin from south west Indian region Kshatriya casts(the Bunts and the Nairs). Some historian promote that the word Melayu derives from the Tamil term Malaiur translated as "land of mountains" - which is erroneous since Sanskrit nor any other Prakrit has a similar word in context. During the time of the first unification Kingdom of the region, locals may have identified with the rulers and started to refer themselves as such, so when the European colonists first arrived they must have proclaimed themselves Malayu or any such phonetically similar variant.

It is interesting to note that the Malays were once referred as "Kun-lun people" in various Chinese records. Kunlun was originally referring to a fabled mountain range that was believed to span parts of Tibet and India. It was used by the Chinese as reference to black, wavy-haired barbarians of the mountains and jungles from the remote part of geographically known world. The Viets, Champas and Khmers were called Kunlun people by the Chinese before the term being applied to the Malays or more accurately Austronesians as a whole. In 750, Jianzhen (688-765) noticed the presence of many "Brahmans, Persians and Kunluns in Canton". The Book of Tang reported that "every year, Kunlun merchants come in their ships with valuable goods to trade with the Chinese".[5]

By 1795, Blumenbach added another race called 'Malay' which he considered to be a subcategory of both the Ethiopian and Mongoloid races. The Malay race were those of a "brown color, from olive and a clear mahogany to the darkest clove or chestnut brown." Blumenbach expanded the term "Malay" to include the native inhabitants of the Marianas, the Philippines, the Malukus, Sundas, Indochina, as well as Pacific Islands such as Tahitians. He considered a Tahitian skull he had received to be the missing link; showing the transition between the "primary" race, the Caucasians, and the "degenerate" race, the Negroids.

Malay variety. Tawny-coloured; hair black, soft, curly, thick and plentiful; head moderately narrowed; forehead slightly swelling; nose full, rather wide, as it were diffuse, end thick; mouth large. upper jaw somewhat prominent with the parts of the face when seen in profile, sufficiently prominent and distinct from each other. This last variety includes the islanders of the Pacific Ocean, together with the inhabitants of the Marianne, the Philippine, the Molucca and the Sunda Islands, and of the Malayan peninsula. I wish to call it the Malay, because the majority of the men of this variety, especially those who inhabit the Indian islands close to the Malacca peninsula, as well as the Sandwich, the Society, and the Friendly Islanders, and also the Malambi of Madagascar down to the inhabitants of Easter Island, use the Malay idiom.[6]

The view of Malays held by Thomas Stamford Raffles had a significant influence on English-speakers, lasting to the present day. He is probably the most important voice who promoted the idea of a ‘Malay’ race or nation, not limited to the Malay ethnic group, but embracing the peoples of a large but unspecified part of the South East Asian archipelago. Raffles formed a vision of Malays as a language-based 'nation', in line with the views of the English Romantic movement at the time, and in 1809 sent a literary essay on the topic to the Asiatic Society. After he mounted an expedition to the former Minangkabau seat of royalty in Pagaruyung, he declared that it was the ‘the source of that power, the origin of that nation, so extensively scattered over the Eastern Archipelago’. In his later writings he moved the Malays from a nation to a race.[7]

Main articles: Malaysian Malay and Article 160 of the Constitution of Malaysia

In Malaysia, the early colonial censuses listed separate ethnic groups, such as "Malays, Boyanese, Achinese, Javanese, Bugis, Manilamen (Filipino) and Siamese". The 1891 census merged these ethnic groups into the three racial categories used in modern Malaysia – Chinese, ‘Tamils and other natives of India’, and ‘Malays and other Natives of the Archipelago’. This was based upon the European view at the time that race was a biologically based scientific category. For the 1901 census, the government advised the word "race" should replace "nationality" wherever it occurs.[7]

After a period of generations being classified in these groups, individual identity formed around the concept of bangsa Melayu (Malay race). For younger generations of people, they saw it as providing a unity and solidarity against the colonial powers, and non-Malay immigrants. The Malaysian nation was later formed with the bangsa Melayu having the central and defining position within the country.[7]

In the Philippines, many Filipinos consider the term "Malay" to refer to the indigenous population of the country as well as the indigenous population of neighboring countries like Indonesia, Malaysia, Singapore, and Brunei. This misconception is due in part to American anthropologists H. Otley Beyer who proposed that the Filipinos were actually Malays who migrated from Malaysia and Indonesia. This idea was in turn propagated by Filipino historians and is still taught in many schools. However, the prevalent consensus among contemporary anthropologists, archaeologists, and linguists actually proposes the reverse; namely that the ancestors of the Austronesian people of Malaysia, Brunei, and Indonesia had originally migrated south and west from the Philippines during the prehistoric period from an origin in Taiwan. This prevalent consensus is however being challenged by new findings from HUGO which shows that East Asian migration went from south to north. Hence the Philippines, was peopled from the south, and so did China, Japan and Korea.[8] Note, however, that the Taiwan hypothesis is mainly based on linguistic and partly archaeological evidence, and says nothing about genes or the oldest migrations to East Asia and the initial peopling of the area, only about the migration that led to the spread of the Austronesian languages. Therefore, there is no contradiction.

In the United States, the racial classification "Malay race" was introduced in the early twentieth century into the anti-miscegenation laws of a number of western US states. Anti-miscegenation laws were state laws that prohibited marriage between European Americans and African Americans and in some states also other non-whites. After an influx of Filipino immigrants, these existing laws were amended in a number of western states to prohibit marriage between Caucasians and Filipinos, who were designated as members of the Malay race, and a number of Southern states committed to racial segregation followed suit. Eventually 9 states (Arizona, California, Georgia, Maryland, Nevada, South Dakota, Utah, Virginia, and Wyoming) explicitly prohibited marriage between Caucasians and Asians.[9] In California, there was some confusion over whether pre-existing state laws prohibiting marriage between whites and "Mongolians" also prohibited marriage between whites and Filipinos. A 1933 Supreme Court of California case Roldan v. Los Angeles County concluded that such marriages were legal as Filipinos were members of the "Malay race" and were not enumerated in the list of races for whom marriage with whites was illegal. The California legislature soon after amended the laws to extend the prohibition against interracial marriage to whites and Filipinos.[10][11]

Many anti-miscegenation laws were gradually repealed after the Second World War, starting with California in 1948. In 1967, all remaining bans against interracial marriage were judged to be unconstitutional by the United States Supreme Court in Loving v. Virginia and therefore repealed.