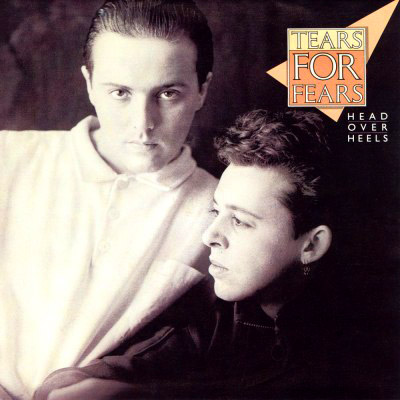 "Head over Heels" is a song by the British pop/rock band . It was the band's tenth single release in the (the fourth taken from their second LP "") and eighth UK Top 40 hit, peaking at #12 in July 1985. In the USA, it was the third single from the album and continued the band's run of hits there, peaking at #3 on the . A limited edition four-leaf clover shaped was issued for the single's release in the UK.

"Head over Heels" had been developed nearly two years prior as part of a with the song "Broken", which was previously a stand alone B-side to the 1983 "" single. As the two songs share the same piano/synth motif, "Head over Heels" eventually came to be sandwiched in between two bookend parts of "Broken" in live performances. This placement carried over to the final track listing of the "Big Chair" LP, with a studio recording of "Broken" preceding "Head Over Heels" and a live of "Broken" following it.

"Head over Heels" has seen only two official remixes since its release.

The 12" version was titled the "Preacher Mix" and is an extended remix of the entire "Broken/Head Over Heels/Broken" medley. The mix was done by producer Chris Hughes and features an unusual spoken word intro in which recites lyrics from the song "I Believe" in the style of a preacher. This mix is notable as it contains the only released studio recording of the "Broken" reprise (the version on the "Songs from the Big Chair" album is a live recording).

The 7" remix was done by and notably ends in a "cold stop" after the "time flies" lyric, instead of the segue into the reprise of "Broken" found on the album.

"When in Love with a Blind Man" is a short song that served as the b-side to the "Head over Heels" single. It features bassist on vocals.

The promotional clip for "Head over Heels", filmed in June 1985, was the fourth Tears for Fears clip directed by famed music video producer . It is centered around 's attempts to get the attention of a librarian (played by Canadian model Joan Densmore), while a variety of characters (many played by the rest of the band) take part in shenanigans in the library. The video was filmed at the Emmanuel College Library in .

"Head over Heels" was featured prominently in the 2001 film "". According to director Richard Kelly on the DVD commentary, the scene in which the song was used was written and choreographed specifically with the song in mind.

"Head over Heels" has been covered by the following artists:

*American band , on their 2005 album "".
*American experimental folk singer , on his 2007 album "But This Chicken Proved False".
*Most recently, southern California's freeform Bargain Music has covered the song. This version finds vocalist Josh alone with an acoustic guitar playing the entire song solo. It is also track #7 on their new album American Born.
*Australian band sampled pieces of the song on their 2007 single . Some of these pieces were also used in an Australian television advertisement on Channel 10 for the Australian drama in mid 2007, helping to revamp the show.
*American band on their second "Movie Song" cover album .
* Also Covered This Song On Their 2007 Summer Tour