The Melbourne International Film Festival (MIFF) is an acclaimed annual film festival held over three weeks in Melbourne, Australia. It was founded in 1951,[1] making it one of the oldest in the World.

The festival is currently accredited by the American Academy of Motion Picture Arts and Sciences,[3] Australian Film Institute[4] and British Academy of Film and Television Arts.[3] It is also the only festival in Australia to be accredited by all three.

Melbourne also holds a significant place in the history of film for being home to the World's first full-length feature film, The Story of the Kelly Gang (1906).[5][6]

The festival is conducted across various venues located in the Melbourne City Centre, which include the Australian Centre for the Moving Image, the Forum Theatre, Melbourne Town Hall, RMIT Capitol Theatre, the Victorian Arts Centre and various cinema complexes.[21]

The 37ºSouth Market is the only international film financing marketplace to take place during a film festival in Australia.[22] It is held over four days at the Australian Centre for the Moving Image, and with industry panels and guest lectures taking place at the Forum Theatre. It enables Australian and international producers with market-ready feature-length projects to meet with financiers.[22] The 37ºSouth Market is also the exclusive partner of the London Production Finance Market for Australia and New Zealand.[22]

Whilst MIFF remains mostly a non-competitive festival, since 1962 it has staged a highly regarded short film competition.[24] It also presents audience popularity awards for feature film and documentary.[24] 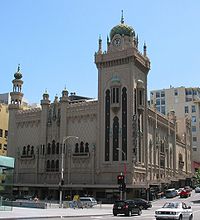 The Forum Theatre is a main venue for the short film competition, as well as festival panels and lectures

During the 58th festival in 2009, the controversial film The 10 Conditions of Love (2009), which documents the life of the exiled Uyghur leader Rebiya Kadeer, was screened despite many attempts by the Government of China (which labels her a terrorist) to have the film withdrawn from the festival.

Chinese filmmakers withdrew their films from the festival two days before it opened on 24 July.[25] Former MIFF director Richard Moore refused to pull the film from the festival program,[26] despite the festival website and its online ticketing system being hacked from an IP address of Chinese origin.[27] The festival website was hacked soon after the launch of its program for 2009, with information replaced with the Chinese flag and anti-Kadeer slogans.[28] Victoria Police was placed on alert during the screening of the film, and Pro-Uighur demonstrators also gathered outside the Melbourne Town Hall.[29]

The Dalai Lama also sent a message of support via, Member of the Parliament of Australia for Melbourne Ports, Michael Danby:

[The Dalai Lama] asked me to convey to you, in Melbourne, that [Kadeer] is another one of the national leaders who is a paradigm of non-violence... He wanted to make it very clear to people that the claims of this woman being a violent person or instigating violence, is from his point of view, and with all of his authority, wrong.

The Government of China attempted to have the film withdrawn from the festival, going to the extent of contacting, Lord Mayor of Melbourne, Robert Doyle.[29] Doyle, however, refused to intervene. Australia's Ambassador to China Geoff Raby was summoned by China's Deputy Foreign Minister Zhang Zhijun to express displeasure about Kadeer's attendance at MIFF.[31]

In 2000, MIFF's rejection of a feature film written and directed by Richard Wolstencroft led him to form the Melbourne Underground Film Festival (MUFF). In subsequent years, MUFF has attracted controversy by criticising the content of MIFF as well as its former long-time Director Richard Moore. Wolstencroft claims that MUFF champions "an alternative voice in Australian cinema".[32]

Other film festivals in Melbourne