Sputter deposition is a physical vapor deposition (PVD) method of depositing thin films by sputtering, that is ejecting, material from a "target," that is source, which then deposits onto a "substrate," such as a silicon wafer. Resputtering is re-emission of the deposited material during the deposition process by ion or atom bombardment. Sputtered atoms ejected from the target have a wide energy distribution, typically up to tens of eV (100,000 K). The sputtered ions (typically only a small fraction — order 1% — of the ejected particles are ionized) can ballistically fly from the target in straight lines and impact energetically on the substrates or vacuum chamber (causing resputtering). Alternatively, at higher gas pressures, the ions collide with the gas atoms that act as a moderator and move diffusively, reaching the substrates or vacuum chamber wall and condensing after undergoing a random walk. The entire range from high-energy ballistic impact to low-energy thermalized motion is accessible by changing the background gas pressure. The sputtering gas is often an inert gas such as argon. For efficient momentum transfer, the atomic weight of the sputtering gas should be close to the atomic weight of the target, so for sputtering light elements neon is preferable, while for heavy elements krypton or xenon are used. Reactive gases can also be used to sputter compounds. The compound can be formed on the target surface, in-flight or on the substrate depending on the process parameters. The availability of many parameters that control sputter deposition make it a complex process, but also allow experts a large degree of control over the growth and microstructure of the film.

Sputtering is used extensively in the semiconductor industry to deposit thin films of various materials in integrated circuit processing. Thin antireflection coatings on glass for optical applications are also deposited by sputtering. Because of the low substrate temperatures used, sputtering is an ideal method to deposit contact metals for thin-film transistors. Perhaps the most familiar products of sputtering are low-emissivity coatings on glass, used in double-pane window assemblies. The coating is a multilayer containing silver and metal oxides such as zinc oxide, tin oxide, or titanium dioxide. Sputtering is also used to metalize plastics such as potato chip bags. A large industry has developed around tool bit coating using sputtered nitrides, such as titanium nitride, creating the familiar gold colored hard coat. Sputtering is also used as the process to deposit the metal (e.g. aluminium) layer during the fabrication of CDs and DVDs.

Hard disk surfaces use sputtered CrOx and other sputtered materials. Sputtering is one of the main processes of manufacturing optical waveguides and is another way for making efficient photovoltaic solar cells.

Comparison with other deposition methods 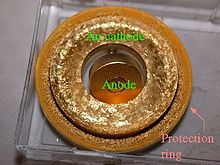 A typical ring-geometry sputter target, here gold showing the cathode made of the material to be deposited, the anode counter-electrode and an outer ring meant to prevent sputtering of the hearth that holds the target.

An important advantage of sputter deposition is that even materials with very high melting points are easily sputtered while evaporation of these materials in a resistance evaporator or Knudsen cell is problematic or impossible. Sputter deposited films have a composition close to that of the source material. The difference is due to different elements spreading differently because of their different mass (light elements are deflected more easily by the gas) but this difference is constant. Sputtered films typically have a better adhesion on the substrate than evaporated films. A target contains a large amount of material and is maintenance free making the technique suited for ultrahigh vacuum applications. Sputtering sources contain no hot parts (to avoid heating they are typically water cooled) and are compatible with reactive gases such as oxygen. Sputtering can be performed top-down while evaporation must be performed bottom-up. Advanced processes such as epitaxial growth are possible.

Some disadvantages of the sputtering process are that the process is more difficult to combine with a lift-off process for structuring the film. This is because the diffuse transport, characteristic of sputtering, makes a full shadow impossible. Thus, one cannot fully restrict where the atoms go, which can lead to contamination problems. Also, active control for layer-by-layer growth is difficult compared to pulsed laser deposition and inert sputtering gases are built into the growing film as impurities.

Sputtering sources are usually magnetrons that utilize strong electric and magnetic fields to trap electrons close to the surface of the magnetron, which is known as the target. The electrons follow helical paths around the magnetic field lines undergoing more ionizing collisions with gaseous neutrals near the target surface than would otherwise occur. (As the target material is depleted, a "racetrack" erosion profile may appear on the surface of the target, as seen in the photo at right.) The sputter gas is inert, typically argon. The extra argon ions created as a result of these collisions leads to a higher deposition rate. It also means that the plasma can be sustained at a lower pressure. The sputtered atoms are neutrally charged and so are unaffected by the magnetic trap. Charge build-up on insulating targets can be avoided with the use of RF sputtering where the sign of the anode-cathode bias is varied at a high rate. RF sputtering works well to produce highly insulating oxide films but only with the added expense of RF power supplies and impedance matching networks. Stray magnetic fields leaking from ferromagnetic targets also disturb the sputtering process. Specially designed sputter guns with unusually strong permanent magnets must often be used in compensation. 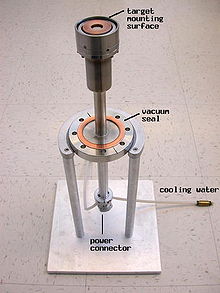 A magnetron sputter gun showing the target-mounting surface, the vacuum feedthrough, the power connector and the water lines. This design uses a disc target as opposed to the ring geometry illustrated above.

Ion-beam sputtering (IBS) is a method in which the target is external to the ion source. A source can work without any magnetic field like in a hot filament ionization gauge. In a Kaufman source ions are generated by collisions with electrons that are confined by a magnetic field as in a magnetron. They are then accelerated by the electric field emanating from a grid toward a target. As the ions leave the source they are neutralized by electrons from a second external filament. IBS has an advantage in that the energy and flux of ions can be controlled independently. Since the flux that strikes the target is composed of neutral atoms, either insulating or conducting targets can be sputtered. IBS has found application in the manufacture of thin-film heads for disk drives. A pressure gradient between the ion source and the sample chamber is generated by placing the gas inlet at the source and shooting through a tube in into the sample chamber. This saves gas and reduces contamination in UHV applications. The principal drawback of IBS is the large amount of maintenance required to keep the ion source operating.[1]

In reactive sputtering, the deposited film is formed by chemical reaction between the target material and a gas which is introduced into the vacuum chamber. Oxide and nitride films are often fabricated using reactive sputtering. The composition of the film can be controlled by varying the relative pressures of the inert and reactive gases. Film stoichiometry is an important parameter for optimizing functional properties like the stress in SiNx and the index of refraction of SiOx. The transparent indium tin oxide conductor that is used in optoelectronics and solar cells is made by reactive sputtering.[2]

In ion-assisted deposition (IAD), the substrate is exposed to a secondary ion beam operating at a lower power than the sputter gun. Usually a Kaufman source like that used in IBS supplies the secondary beam. IAD can be used to deposit carbon in diamond-like form on a substrate. Any carbon atoms landing on the substrate which fail to bond properly in the diamond crystal lattice will be knocked off by the secondary beam. NASA used this technique to experiment with depositing diamond films on turbine blades in the 1980s. IAS is used in other important industrial applications such as creating tetrahedral amorphous carbon surface coatings on hard disk platters and hard transition metal nitride coatings on medical implants. 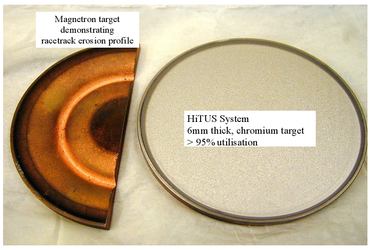 HIPIMS is a method for physical vapor deposition of thin films which is based on magnetron sputter deposition. HIPIMS utilizes extremely high power densities of the order of kW/cm2 in short pulses (impulses) of tens of microseconds at low duty cycle of < 10%.

In 1974 J. A. Thornton applied the structure zone model for the description of thin film morphologies to sputter deposition. In a study on metallic layers prepared by DC sputtering,[6] he extended the structure zone concept initially introduced by Movchan and Demchishin for evaporated films.[7] Thornton introduced a further structure zone T, which was observed at low argon pressures and characterized by densely packed fibrous grains. The most important point of this extension was to emphasize the pressure p as a decisive process parameter. In particular, if hyperthermal techniques like sputtering etc. are used for the sublimation of source atoms, the pressure governs via the mean free path the energy distribution with which they impinge on the surface of the growing film. Next to the deposition temperature Td the chamber pressure or mean free path should thus always be specified when considering a deposition process.

Since sputter deposition belongs to the group of plasma-assisted processes, next to neutral atoms also charged species (like argon ions) hit the surface of the growing film, and this component may exert a large effect. Denoting the fluxes of the arriving ions and atoms by Ji and Ja, it turned out that the magnitude of the Ji/Ja ratio plays a decisive role on the microstructure and morphology obtained in the film.[8] The effect of ion bombardment may quantitatively be derived from structural parameters like preferred orientation of crystallites or texture and from the state of residual stress. It has been shown recently [9] that textures and residual stresses may arise in gas-flow sputtered Ti layers that compare to those obtained in macroscopic Ti work pieces subjected to a severe plastic deformation by shot peening.